Comments (0)
Add to wishlistDelete from wishlist
Cite this document
Summary
More specifically, the study explains the political changes that have taken place in USA from 2008 to 2011 in regard to political philosophy. In addition, the study will focus on the political changes brought by…
Download full paperFile format: .doc, available for editing
HIDE THIS PAPERGRAB THE BEST PAPER97% of users find it useful 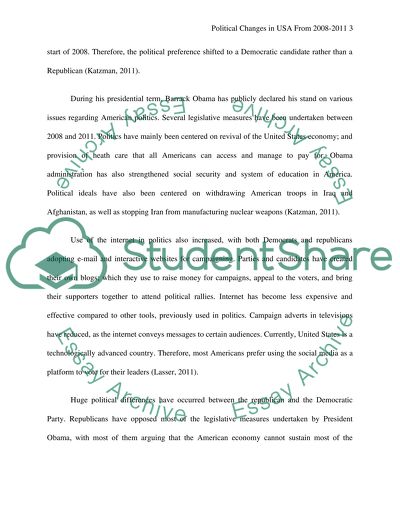 Running Head: POLITICAL CHANGES IN USA FROM 2008 This is a study about political changes in the United States. More specifically, the study explains the political changes that have taken place in USA from 2008 to 2011 in regard to political philosophy. In addition, the study will focus on the political changes brought by President Obama’s administration.
Since the 2008 presidential elections, significant changes have occurred in the political culture of the United States. The Democratic Party shaped results of the elections, as Barrack Obama emerged the winner. There was a significant breakthrough in the elections following the massive votes received by Obama, an African American. This revealed that racism did not guide the elections, as people wanted change in governance. Citizens of the United States expressed dissatisfaction with the republican governance, following George W. Bush’s two terms in office.
There have also been changes in the voting structure, with many young people and minority groups participating in the polls. As a result, the political philosophy in the United States from 2008 seems more different than any other period in the history of the United States. Preference for young contestants increased; as such older candidates faced enormous challenges and opposition from younger ones. John McCain could not have defeated the democrat candidate because most Americans did not prefer people of his age (Lasser, 2011).
In addition, dissatisfaction with the administration of George Bush made the electorate opt for a difference. An increased number of casualties in Afghanistan and Iraq war changed the mood of American electorate, following deaths of many American soldiers while fighting terrorists. During the Bush administration, economy of the United States had started to experience reduced growth. The banking industry and the stock market performed poorly in the start of 2008. Therefore, the political preference shifted to a Democratic candidate rather than a Republican (Katzman, 2011).
During his presidential term, Barrack Obama has publicly declared his stand on various issues regarding American politics. Several legislative measures have been undertaken between 2008 and 2011. Politics have mainly been centered on revival of the United States economy; and provision of heath care that all Americans can access and manage to pay for. Obama administration has also strengthened social security and system of education in America. Political ideals have also been centered on withdrawing American troops in Iraq and Afghanistan, as well as stopping Iran from manufacturing nuclear weapons (Katzman, 2011).
Use of the internet in politics also increased, with both Democrats and republicans adopting e-mail and interactive websites for campaigning. Parties and candidates have created their own blogs; which they use to raise money for campaigns, appeal to the voters, and bring their supporters together to attend political rallies. Internet has become less expensive and effective compared to other tools, previously used in politics. Campaign adverts in televisions have reduced, as the internet conveys messages to certain audiences. Currently, United States is a technologically advanced country. Therefore, most Americans prefer using the social media as a platform to vote for their leaders (Lasser, 2011).
Huge political differences have occurred between the republican and the Democratic Party. Republicans have opposed most of the legislative measures undertaken by President Obama, with most of them arguing that the American economy cannot sustain most of the legislation. Republicans are against Medicare and Medicaid policies mainly implemented to cater for the aged and vulnerable groups in the United States (Lasser, 2011).
In conclusion, there have been considerable political changes in the United States from 2008 to 2011. These changes have mainly occurred following the election of President Barrack Obama in 2008. There have been political differences between the republican and Democratic Party resulting from the policies undertaken by the Obama administration.
References:
Katzman, K. (2011).Iraq: Politics, Governance, and Human rights. Diane Publishing.
Lasser, W. (2011). Perspectives on American Politics. Cengage Learning.

“Explains the Political Changes the United States Underwent in the Essay”, n.d. https://studentshare.org/history/1584755-explains-the-political-changes-the-united-states-underwent-in-the-2008-2011-period-in-regards-to-political-philosophy.
Comments (0)
Click to create a comment or rate a document

...?Analysis of the Political Change the United s Underwent In 2008 Introduction United s has undergone many political changes since it gained its independence. There have been considerable political changes in the United States politics between 2008 and 2011. The leadership of President Obama and his Administration characterizes the period 2008 and 2011. These political changes have changed the view of the American people on the form of government that is serving them. The following are some of the areas that have undergone changes in the United States and they include political philosophy, economic issues, foreign policy, party politics, and legal/constitutional aspects; these areas will be discussed in detail. Political Philosophy... a...
10 Pages(2500 words)Research Paper

... owners of the south. This was the emergence of the second party system and the period of 1830s and 1840s entailed upheavals. The 1860s marked the Civil war, which marked eleven southern states fighting for independence from the rue of US. The north came out victorious under Abraham Lincoln’s leadership and this marked the end of the Confederacy and the slave period. Lincoln represented the Republicans who opposed westward expansion of slavery. The period from 1789 to 1860 is marked with some remarkable changes in the political scenario and policymaking derived form the Founding Fathers and this has given shape to the current culture and structure. Reference Katzman, David, A People and A Nation, Cengage... of women’s suffrage, number of...
2 Pages(500 words)Essay

...hand, the Absolutist answer describes that the state of nature, without political security is barbarous, dangerous, as well as, impoverished, that is rational to give major freedom to the government or state in order to gain security or peace. Hobbes agrees with this statement in his “Leviathan”. In the Democratic Answer, John Locke concurs with Hobbes when he states that individuals can contract with the government in order to give up on some freedom in exchange of security. Nonetheless, he disagrees with him on the degree of which people should surrender to the state. According to Locke, it is illogical to give up natural rights to representation,...
7 Pages(1750 words)Essay

...Political Philosophy Introduction Many people have questioned whether the government, with all its laws and regulations, is justified to rule the people. What right does the government have to demand that its people obey? Why should an individual obey the state in the first place? These are just a few of philosophical queries being asked. Nonetheless, a majority of the responds stress the need for an orderly process and protection as the justification for obedience to the government. Some have highlighted the need to promote cultural and spiritual aspects of the populace while others stress the need for economic well-being, which stands as the foundation for all values. This text looks...
8 Pages(2000 words)Essay

...Sociological aspect of primary and secondary rules of H.L.A. Hart Herbert Lionel Adolphus Hart was a great philosopher of the twentieth century. He was a barrister by profession but accepted the post of teaching fellowship at New College, Oxford. He was dedicated in the field of legal and politicalphilosophy and was well known for his work, The Concept of Law, in 1961. He has also developed a theory of legal positivism. Theories of legal positivists were based on three things. Firstly according to them it is not always that what the law should be is the law. It means that sometimes legal thing is not moral. What the law is and what it should... they ...
2 Pages(500 words)Essay

.... Everyone is willing to risk monopoly money, but resist when it is their hard earned dollars and naturally wish to stay with the status quo rather than taking a risk for change. The economy has emerged as the most important issue in voters' minds, and voters will vote with regards to their own self-interest. This factor is bolstered by the fear that the economic situation may be worse than it actually is, which has placed the status quo as an unknown quantity. This should favor Obama, as it will make voters more likely to vote for change and willing to risk an unknown outcome. Political polls often state a margin of error that may be as close as...
6 Pages(1500 words)Essay

...﻿Political Philosophy Whenever we consider the social nature of a government, i.e. what constitutes a government, what legislations it should pass, what laws it should uphold, what freedoms it should defend as well as what duties its citizens owe to the government and their city or country we refer to this branch of philosophy as political philosophy. This type of philosophy focuses on the basic nature of the political system though it is a more generalized form of the discipline rather than technical. Socrates and his pupil Plato are one of the first in history to delve into the aspect of political philosophy. Plato’s the republic spoke of Plato’s vision for an ideal state understood that justice was essential to the unity... of the...
4 Pages(1000 words)Assignment

...Political Philosophy How and its legitimate use of physical force came into being is a controversial for researchers.Political philosophers like Hobbs (1588-1679), Locke (1632-1704), Rousseau (1712-1778) and others proposed their own different convictions on Social Contract Theory, as a device used to justify the political authority. According to them, political power originated from a pre political natural condition through a gradual development of Social Contract. This pre political natural condition is termed as ‘state of nature’. Although the theorists agree that people were to renounce their liberty for the sake of...
6 Pages(1500 words)Essay

...of the dominant ideology and system of political economy in the countries. For instance, in purely capitalistic countries like the United States, defense of natural rights to private property take precedence over all other claims whereas in socialist countries, the state and private owners are sometimes at odds when the issue of defense of property rights is concerned. And in purely communist countries (a rarity nowadays), the state has the absolute power over property and there is no concept of private property. Nature of Power and Capital according to Marx According to Marx, capital “refers to a historically specific mode of production (based on the...
6 Pages(1500 words)Essay
sponsored ads
Save Your Time for More Important Things
Let us write or edit the essay on your topic "Explains the political changes the United States underwent in the 2008-2011 period in regards to political philosophy" with a personal 20% discount.
GRAB THE BEST PAPER

Let us find you another Essay on topic Explains the political changes the United States underwent in the 2008-2011 period in regards to political philosophy for FREE!