The Ethical Use of Nuclear Weapons - Essay Example 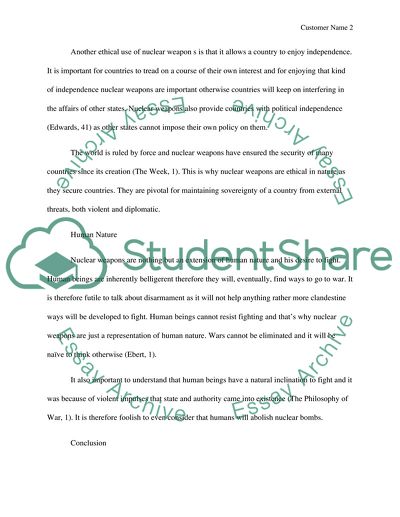 Extract of sample "The Ethical Use of Nuclear Weapons"

﻿The Ethical Use of Nuclear Weapons
Introduction
Since its creation nuclear weapon has been a tremendous threat for human existence. People often criticize nuclear weapons due to the potential harm they can cause to human civilization, but seldom have they realized the potential advantages of nuclear technology. In this paper we will discuss the ethical use of nuclear weapons. The use of nuclear weapons as a deterrent, as a source of independence, and its similarity to human nature the points we will discuss below.
Nuclear Weapons as Deterrent
The potential damages of nuclear weapons are so dreadful that it creates a deterring effect on different countries (Schelling, 4). Countries fear a nuclear attack and that’s why they do not attack other states. This is an ethical use of nuclear weapons because it puts violence to an end. Wars are a part and parcel of human civilization but now nuclear weapons can help eradicate violent conflicts.
The concept of Mutually Assured Destruction (MAD) says that a nuclear attack by two parties on each other will eventually lead to their mutual destruction (Parrington, 1). This restricts or deters a country from using nuclear weapons against another country. The ethical use of nuclear weapons has ensured a long lasting peace by acting as a strong deterrent.
Independence of States
Another ethical use of nuclear weapon s is that it allows a country to enjoy independence. It is important for countries to tread on a course of their own interest and for enjoying that kind of independence nuclear weapons are important otherwise countries will keep on interfering in the affairs of other states. Nuclear weapons also provide countries with political independence (Edwards, 41) as other states cannot impose their own policy on them.
The world is ruled by force and nuclear weapons have ensured the security of many countries since its creation (The Week, 1). This is why nuclear weapons are ethical in nature as they secure countries. They are pivotal for maintaining sovereignty of a country from external threats, both violent and diplomatic.
Human Nature
Nuclear weapons are nothing but an extension of human nature and his desire to fight. Human beings are inherently belligerent therefore they will, eventually, find ways to go to war. It is therefore futile to talk about disarmament as it will not help anything rather more clandestine ways will be developed to fight. Human beings cannot resist fighting and that’s why nuclear weapons are just a representation of human nature. Wars cannot be eliminated and it will be naïve to think otherwise (Ebert, 1).
It also important to understand that human beings have a natural inclination to fight and it was because of violent impulses that state and authority came into existence (The Philosophy of War, 1). It is therefore foolish to even consider that humans will abolish nuclear bombs.
Conclusion
Nuclear technology is serving many important purposes and one can argue that it has ethical uses. It is stopping the world from fighting with each other and it is also safeguarding independence of states. Nuclear weapons represent human nature and therefore they cannot be curbed. Human beings are natural fighters and they cannot change that so nuclear weapons should not be abandoned and their ethical uses should be accepted.
Works Cited Page
Col. Parrington, Alan. Mutually Assured Destruction Revisited, Strategic Doctrine in Question. Airpower Journal, (1997). Print
Ebert, Roger. The Fog of War. Rogerebert.com, (2004). Web. 19 November 2011 from http://rogerebert.suntimes.com/apps/pbcs.dll/article?AID=/20040123/REVIEWS/401230302/1023
Edward, A. Nuclear weapons, the balance of terror, the quest for peace. New York: Sunny Press, (1986). Print
Pros and Cons of Nuclear deterrent. The Week UK, (2006). Web. 19 November 2011 from http://www.theweek.co.uk/politics/35629/pros-and-cons-nuclear-deterrent
Schelling, T. C. The Diplomacy of Violence. New Haven: Yale University Press, (1966). Print
The Philosophy of War. Internet Encyclopedia of Philosophy, (2010). Web. 19 November 2011 from http://www.iep.utm.edu/war/#H3 Read More
Share:
Tags
Cite this document
(“The Ethical Use of Nuclear Weapons Essay Example | Topics and Well Written Essays - 500 words”, n.d.)
The Ethical Use of Nuclear Weapons Essay Example | Topics and Well Written Essays - 500 words. Retrieved from https://studentshare.org/history/1584703-the-ethical-use-of-nuclear-weapons

“The Ethical Use of Nuclear Weapons Essay Example | Topics and Well Written Essays - 500 Words”, n.d. https://studentshare.org/history/1584703-the-ethical-use-of-nuclear-weapons.
Comments (0)
Click to create a comment or rate a document

CHECK THESE SAMPLES OF The Ethical Use of Nuclear Weapons

...disarmament in good faith in a bid to eliminate nuclear weapons altogether. This course of action has been with the belief that international peace and security in the long run would be promoted in the absence of nuclear weapons (Geller, 1990). However, there has been a view that nuclear weapons are useful and indispensable in promoting international peace and security; those who feel protected by the said weapons or possess them argue that they are not meant to be used but rather employed solely as a military deterrent to adversaries thereby preventing war (Berry et al, 2010). The...
11 Pages(2750 words)Essay

...Ethical Considerations of Using Nuclear Weapons Introduction The dawn of August 6, 1945 and August 9, 1945, when atomic bombs were dropped on Hiroshima and Nagasaki did not only put the last nail in the coffin of Second World War but at the same time, initiated a huge debate about the ethical considerations of using nuclear weapons. This paper is an attempt to explore the same debate from various perspectives and analyze, explore and evaluate the arguments. However, the paper strongly believes that “nuclear weapons are immoral, unnecessary, illegitimate tools of mass...
10 Pages(2500 words)Essay

...critical interests are at stake (Paul et al, 2009). So, what ethical issue and ethical problems does this issue present? Inarguably, nuclear weapons when deployed for use have destructive effects. This is the very reason that most countries of the world including the five permanent members of the UN Security Council are committed in law and word to pursue nuclear disarmament and eliminate nuclear weapons in the world. The ethical issue presented in this situation is integrity (Granoff, 1999); are these states willing to abandon their nuclear enrichment ambitions and...
4 Pages(1000 words)Essay

Market segmentation as a basic ingredient of the marketing strategy

...?Nuclear weapons Some nations own or possess nuclear weapons based on the legitimacy they place upon themselves, where they are termed as being a source of security. However, many other reasons for which these weapons are in use or exist, which form the base of this essay. This is addition to looking at the consequences of having such weapons on the world in terms of economic and social implications. Morality, Prudence, and Nuclear Weapons states clearly that nuclear weapons are used for their traditional role in the pursuit of national...
4 Pages(1000 words)Essay

..."Nuclear Weapons and Nuclear Power" "The last war: a world set free" is a novel published in 1914 by H .G. Wells. The book is considered to foretellnuclear weapons. There are growing numbers of people in the United States today who are standing up and speaking out against the dangers of nuclear weapons. At the same time a large number of these people are in favor of the use of nuclear power as a means of generating electricity. They believe, perhaps correctly, that the risk from the former is greater and more imminent, and further, that there is no connection between nuclear power and...
10 Pages(2500 words)Book Report/Review

...threat to world peace since there has not been incidences its use. B. However, this argument has been opposed since there is no way countries could be developing the nuclear weapons without the intent of using them in wars C. Nuclear weapons are purely developed for war and, consequently, it cannot be claimed that since there are no cases of usage, the weapons pose no threat to the world population and environment. III. Public knowledge on the weapons A. The public is not usually given enough information on the weapons before the development is started (Gallucci 54) B. The public needs...
2 Pages(500 words)Thesis Proposal

...a larger toll in modern city such as New York and Paris. In addition, a ground level explosion would lead to immense death s due to the intensity of local fallout that would lead to deaths within an hour or even two weeks as a result of radiation. However, such a phenomena was absent in the Japanese cities. After the 1945 incidents, there was an international outcry which resulted in the formation of international bodies such as the UN in order to regulate the building of nuclear weapons. However, this effort has failed miserably. It is of great importance to note that the two bombs that were initially used have been expanded (Kapur 2007). For instance, current bombs have a common...
9 Pages(2250 words)Coursework

...Nuclear Weapon Nuclear weapon is a serious, significant and much important aspect of the international relationships. Presence of a nuclear option is a strong and powerful mechanism in the hard task of keeping peace between world’s greatest and most influential nations and governments. United States of America for a long time was and still is a sovereign referee but other countries which possess nuclear weapons also influence political and economic situation in the world. Among the major concerns for US government is the presence of nuclear weapons in North Korea due to...
2 Pages(500 words)Coursework
sponsored ads
Save Your Time for More Important Things
Let us write or edit the essay on your topic "The Ethical Use of Nuclear Weapons" with a personal 20% discount.
GRAB THE BEST PAPER

Let us find you another Essay on topic The Ethical Use of Nuclear Weapons for FREE!