Comments (0)
Add to wishlistDelete from wishlist
Cite this document
Summary
This paper under the headline "Holocaust in Auschwitz Camp" focuses on the fact that when David Cole, a revisionist, interviewed Dr Franciszek Piper, the curator of Auschwitz museum, the main purpose was to find out the truth about the Jews holocaust. …
Download full paperFile format: .doc, available for editing
HIDE THIS PAPERGRAB THE BEST PAPER96.6% of users find it useful 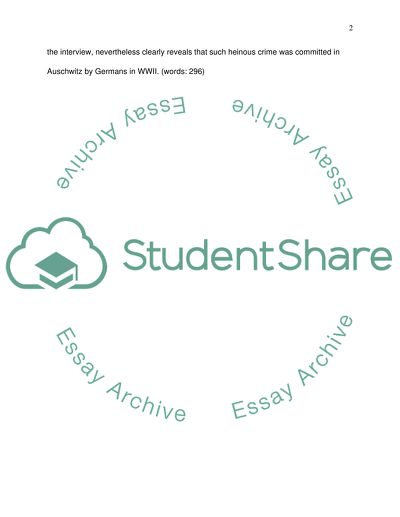 According to the interview, Cole has disapproved the theory of concentration camps and gas chambers as the gas used were just a disinfectant.
Piper was an eye witness to the holocaust and believes that the figure projected by Russian was much higher, only about 1.1 million Jews had died as against the Russian propaganda of 4.4 million Jews who had been exterminated! The bullets marks were that of Air Force raids when it was turned into airbase for Germans while fighting against Allied forces. Cole believes that Auschwitz’ gas chambers and concentration camps were wild imaginations of few and Jews had probably died due to hard working conditions.
But 1.1 million is not a small number and if Piper has quoted this number, then mass murders did happen. Whether they were killed or not in gas chambers or were tortured to death in concentration camps is immaterial. I fail to understand the purpose of Cole’s interview with Piper because even though, he has found no evidence that proves that people could have been killed in the gas chamber that was shown to Cole, the interview, nevertheless clearly reveals that such heinous crime was committed in Auschwitz by Germans in WWII.  Read More
Share:
Tags
Cite this document
(Holocaust in Auschwitz Camp Essay Example | Topics and Well Written Essays - 298 words - 1, n.d.)
Holocaust in Auschwitz Camp Essay Example | Topics and Well Written Essays - 298 words - 1. Retrieved from https://studentshare.org/history/1584407-david-cole-interviews-dr-franciscek-piper

CHECK THESE SAMPLES OF Holocaust in Auschwitz Camp

...?Auschwitz The “Auschwitz” will be remembered as one of the most terrible places in the modern world. It was originally a small and quiet Polishtown called Oswiecim until it was invaded by the Germans at the beginning of World War two and turned into a concentration camp. Over the years from 1940 until 1944 it became the largest concentration camp of all where more than 1,100,000 men, women and children were killed (Auschwitz website). Today it is a museum and, at the same time, a place of memorial where people can come and reflect on what happened and remember all those people who suffered there. It has a solemn educational purpose to teach future...
10 Pages(2500 words)Research Paper

...?Application Essay This particular article about burned kids allowed or given the opportunity to be just normal touched me to cite as an example for this essay. This is about a youth camp at t YMCA Camp Kern who took in children ages 9 to 16 coming from 17 states who have been treated at Shriners Hospitals for children. This is a yearly event where children who are undergoing treatment and rehabilitation are given a week to have an opportunity to be just kids and be normal just like every one else. All their expenses, including transportation to and from the Warren County camp, are paid by donors. The activities in the camp include fishing, archery, swimming, rafting and...
1 Pages(250 words)Essay

Proofs of The Holocaust

...David Cole Interview with Dr. Franciszek Piper When considering history, it is important to gather facts and separate it from fiction. I think David Coles interview of Dr. Franciszek Piper on the Auschwitz Holocaust is a classic example of how historical evidence should be separated from word of mouth and handed down information. Cole has carried out his research with the purpose of exposing the real history of the Auschwitz camps. I agree to a certain extent the approach he has taken especially by first taking a tourist tour, and then interviewing the officials at the camps. When one filter evidence through different people, there is bound to be...
1 Pages(250 words)Essay

...THE HOLOCAUST DURING YEARS 1938-1944 INTRODUCTION: REMEMBERING HOLOCAUST By the end of the War, Hitler’s National Socialism had killed most of Germany’s Jews and severely damaged the few survivors of the death machinery. The Holocaust as historical atrocious phenomenon caused the creation of more documents than any other historical event. Yet most stories of those in the camps could not have been written; six million Jewish people lost their lives, and with them we lost the possibility of hearing die stories of the horrors they had to endure. As Irving Howe points out, the fundamentally unintelligible nature of the Holocaust leaves anyone concerned...
13 Pages(3250 words)Term Paper
sponsored ads
Save Your Time for More Important Things
Let us write or edit the essay on your topic "Holocaust in Auschwitz Camp" with a personal 20% discount.
GRAB THE BEST PAPER

Let us find you another Essay on topic Holocaust in Auschwitz Camp for FREE!