Comments (0)
Add to wishlistDelete from wishlist
Cite this document
Summary
Ancient Egypt, more than any other culture, took this fascination with morbidity to new levels. Apart from including the portrayal of coffins in the…
Download full paperFile format: .doc, available for editing
HIDE THIS PAPERGRAB THE BEST PAPER93.1% of users find it useful 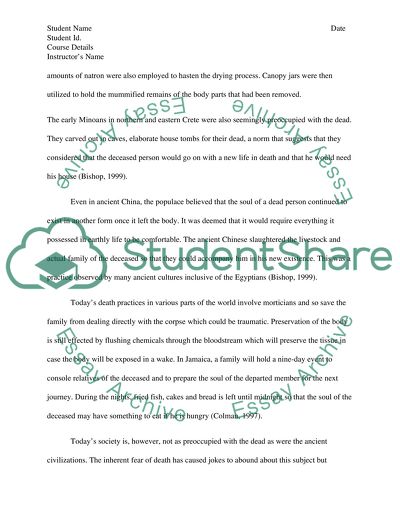 Extract of sample "INTRODUCTION TO HUMANITIES"

Introduction to Humanities Introduction Ancient cultures celebrated death as an inevitable part of life and included daily reminders of it in their daily schedules. Ancient Egypt, more than any other culture, took this fascination with morbidity to new levels. Apart from including the portrayal of coffins in the schedule while partaking dinner, they built fascinating structures to accommodate the bodies of the dead. Every citizen desired a grand dwelling for his corpse. Nevertheless, only the very rich indulged in pyramids as their final dwelling places. The construction of these gigantic artifacts was begun during the incumbent’s lifetime and was carried out near his house.
The ancient Egyptians believed that real life began after the death of the body. It is for this purpose that so much deliberation and concern went into organizing the places where bodies would be brought to rest at the moment of death. The rich had the walls of their tombs carved exquisitely, and rich foods and jewels as well, were left there along with the body. The walls of the tombs also depicted Egyptian gods leading the person’s soul through judgment, and finally to his allotted area. Poor Egyptians were buried in the sand, but also made efforts to ensure that their bodies would first be mummified. (Bishop, 1999)
Preservation
The preservation of the body was very important to ancient Egyptians. They believed that a soul would need it in the next life and so took measures to ensure its maintenance. Mummification, an embalming process that took 70 days, was done to dry the body. Large amounts of natron were also employed to hasten the drying process. Canopy jars were then utilized to hold the mummified remains of the body parts that had been removed.
The early Minoans in northern and eastern Crete were also seemingly preoccupied with the dead. They carved out in caves, elaborate house tombs for their dead, a norm that suggests that they considered that the deceased person would go on with a new life in death and that he would need his house (Bishop, 1999).
Even in ancient China, the populace believed that the soul of a dead person continued to exist in another form once it left the body. It was deemed that it would require everything it possessed in earthly life to be comfortable. The ancient Chinese slaughtered the livestock and actual family of the deceased so that they could accompany him in his new existence. This was a practice observed by many ancient cultures inclusive of the Egyptians (Bishop, 1999).
Today’s death practices in various parts of the world involve morticians and so save the family from dealing directly with the corpse which could be traumatic. Preservation of the body is still effected by flushing chemicals through the bloodstream which will preserve the tissue in case the body will be exposed in a wake. In Jamaica, a family will hold a nine-day event to console relatives of the deceased and to prepare the soul of the departed member for the next journey. During the nights, fried fish, cakes and bread is left until midnight so that the soul of the deceased may have something to eat if he is hungry (Colman, 1997).
Today’s society is, however, not as preoccupied with the dead as were the ancient civilizations. The inherent fear of death has caused jokes to abound about this subject but brought no serious discussions or considerations of it in an organized way in society. In the 21st century, various religions project the belief in an afterlife. This theory assists the relations of the deceased in not feeling totally hopeless as they trust that they will meet with the dead person again. The place where modern religions differ with ancient religions is in the viewing the mortal body as the instrument to be preserved for the spirit’s future use.
Conclusion
All the major religions dispose of their dead trusting in the provision of a newer and more improved body to be provided to the dead in the afterlife. The Hindus cremate their dead while the other religions bury them. Modern religions hold that, in the spirit world, the individual’s provisions will be catered to by the Deity and they will have no desire for earthly necessities.
References
Bishop, P. (1999). Adventures in the Human Spirit. New York: Prentice Hall.
Colman, P.(1997). Corpses, Coffins, and Crypts: A History of Burial. New York: Henry
Holt and Company. Read More
Share:
Tags
Cite this document
(“INTRODUCTION TO HUMANITIES Essay Example | Topics and Well Written Essays - 500 words”, n.d.)
INTRODUCTION TO HUMANITIES Essay Example | Topics and Well Written Essays - 500 words. Retrieved from https://studentshare.org/history/1583792-introduction-to-humanities

CHECK THESE SAMPLES OF INTRODUCTION TO HUMANITIES

...historical narrative, with heroic human figures seeking out their destiny against a background of worldly conflict. There is a strong divine element in this tale, and the notion of a quest for meaning and identity is key to the narrative. The hero of the Epic of Gilgamesh has some human and some supernatural qualities: “Two thirds they made him god and one third man,” (quoted in Fiero, 2010, p. 19) Gods and goddesses play an active part in the plot, appearing in dreams or as actual characters, giving the tale a mythical quality. This story is firmly linked to the origins of the great city civilizations of Mesopotamia, and Gilgamesh embodies the virtues that were most greatly valued then: respect for the...
4 Pages(1000 words)Essay

...rebirth in a human being of higher intellect whereas the bad counterpart becomes reincarnated in the creature of lower status. Bearing a chief influence upon social order, such principle of Hindu religion classified the Hindus into four stiff classes the top of which are the Brahmins or the priests and scholars down to the Sudras or the laborers and slaves, excluding the untouchables (The Caste). So the ancient Indian culture began looking up to the highest status in the that order, claiming that the state of Brahma is achieved only by a blameless soul according to the Hindu doctrine. Moreover, the underlying principles of other religions – Buddhism, Sikhism, and Jainism which brought forth concepts of yoga,...
2 Pages(500 words)Essay

Aristotle and the humanities

...? Aristotle and the Humanities The Greek philosopher Aristotle made contributions to the humanities through his ideas about art, as well as philosophy, specifically through his ideas regarding ethics and politics. When it came to art, Aristotle’s Poetics was an answer to Plato’s accusation against the artists for their alleged destruction of rational harmony, as stated in the Republic (Wolff 64). In the field of ethics, Aristotle’s Nichomachean Ethics provided the basis for showing how to live one’s life in the virtuous way and helped people of his times decide on which things were more important in their lives and what they could do to make them better. Lastly, it is a fact that ancient Greece during Aristotle’s time was a period... of...
5 Pages(1250 words)Research Paper

... The Serious Expression in Western Art ic Western art encompasses a variety of s and themes including religion, mythology, and culture. Despite the variety, portraits were a popular subject of sculpture and painting. Nearly every classic artist produced a portrait of a prominent figure in society or religion. Commonly, these portraits bear a common expression: the serious, stern look that reflects the role they portray in life. Western portraits usually display a serious look in the face of the models despite the personality they portray. In particular, there is no single portrait that presents the model showing his/her teeth or grinning at something. The sculpture of Augustus of Prima Porta by an anonymous artist, Michelangelo’s... The...
5 Pages(1250 words)Essay

...Humanities Discussion Question 4: The importance of challenging existing norms by Dante, Michelangelo, Kierkegaard, Luther and St. Francis, its usefulness to them and how it will help me in considering the meaning of life. By challenging the existing norms of life that had been laid down throughout history, Dante, Michelangelo, Luther, St. Francis and Kierkegaard were able to successfully develop and sustain a variety of new ideas that although quite unpopular with some of the various established governing bodies such as the church; these ideas enabled them to significantly change the world and affect the actual course of history while making significant amounts of contribution to our knowledge on different aspects,...
12 Pages(3000 words)Assignment

... especially that of a sculpture of people of time long past. Works Cited Andrews, Mark. An Introduction to Egyptian Art. (30 October 2009)
4 Pages(1000 words)Essay

...HUMANITIES The Role of Women in Ancient Rome Although women never acquired the right to vote or hold public office, at least in the relatively democratic republican period they were able to develop increasing influence on decisions made by the male representatives of the governing body, the Forum. (Fant 1982) This was due to their greater wealth acquired by inheritances from their fathers and husbands, casualties of Rome’s military adventures. An example of how they were able to do this is as follows. The Rome government needed funds to pay for the unsuccessful war against Hannibal in 216 B.C. and noting their increasing wealth, decided to tax the military widows.(Fant 1982) Initially the women accepted this even though... The Role of...
2 Pages(500 words)Essay

Introduction to the Humanities

...Religion and Theology Details: al Affiliation: Introduction The beautiful constructions of the cathedrals in the fourteenth century Italy were influenced by money that was deposited in the towns by nearby Byzantine civilization. Zealous Christian traders attacked and plundered its capital city, Constantinople and came away influenced by the creative structures and edifices. Business practice and the emergent manufacturing and financial sectors thrived which meant that many merchants came to Italy seeking to build their fortunes and inevitably enrich the city. The change in the painting styles, including the articulation of human emotion as well as the emphasis on the unnatural aspect of religious center...
2 Pages(500 words)Essay

...expected by the father (and maybe all rational readers) from the mother if not from a pair of bratty children is relinquished, as his wife “was ready to fling it out of doors” (Bronte 1847, pg. 29), and Nelly let it sleep on the stairwell, “hoping it might be gone on the morrow” (Bronte 1847, pg. 30). Nelly is categorical in making use of the pronoun “it” in this statement depicts the child by now as somewhat horrible, perverted, and furthermore unrecognizable. The child has no name, gender and humanity too. Can only be well described as a creature. This is a family; one would expect them to treat this child well despite being a stranger. Their authentic lifestyle as Christians is not shown at all. The mother has two...
12 Pages(3000 words)Essay

...St. Augustines Confessions St. Augustines Confessions is one of the most popular Christian works that presents numerous ideasregarding theological attitudes of the medieval ages. St. Augustines Philosophical analysis of the various concepts of religion such as religions, the original sin, salvation, grace and faith have attracted a lot of attention in the public domain. Being a believer and Christian priest, St Augustine provided a deep analysis of the various mysteries of the church, perceiving the weaknesses of human beings and the way they can uphold genuine faith in their Christianity. St Augustine defines the original sin as the greatest manifestation of Man’s pride and disloyalty to God and expresses the need for...
5 Pages(1250 words)Essay
sponsored ads
Save Your Time for More Important Things
Let us write or edit the essay on your topic "INTRODUCTION TO HUMANITIES" with a personal 20% discount.
GRAB THE BEST PAPER

Let us find you another Essay on topic INTRODUCTION TO HUMANITIES for FREE!