Comments (0)
Add to wishlistDelete from wishlist
Cite this document
Summary
These facets include the vastness of a kingdom. Historians perceive many powerful kingdoms to be greater to other little ones. In this sense, the Ghana kingdom assimilated many small kingdoms, before the…
Download full paperFile format: .doc, available for editing
HIDE THIS PAPERGRAB THE BEST PAPER93.8% of users find it useful 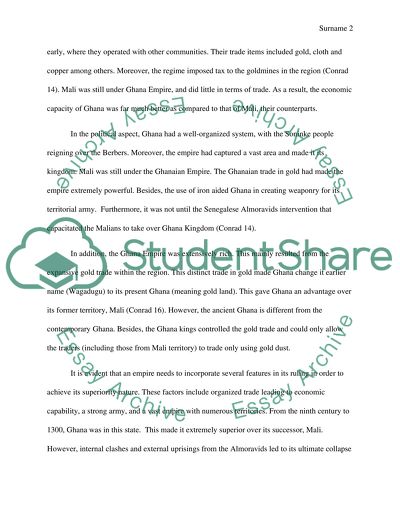 Task: Ghana over Mali Empire “Various aspects can be used to deem an empire as being great to another. These facets include the vastness of a kingdom. Historians perceive many powerful kingdoms to be greater to other little ones. In this sense, the Ghana kingdom assimilated many small kingdoms, before the early 1200 increase its reign. Moreover, a kingdom ought to have a strong and efficient army base to determine its superiority over its subjects and enemies. Besides, trade strengthens an empire over its opponents. This was the case in the Ghana Empire, through its extensive salt and gold trade.
The Mali realm rose back in the mid 1300. Moreover, it emerged from the greater Ghana Empire. However, due to external disputes and internal conflicts within the Ghana Empire and the eventual crumple of the Ghanaian Kingdom, the Mali Kingdom emerged with Sundiata being their leader (Conrad 13). This clearly depicts how Ghanaian began its superiority over the Malian realm. In fact, some historians deem Ghana to be the greatest kingdom in the early part of the 1300.
Besides, civilization started in Ghana earlier than in Mali. In fact, civilization in Ghana began even before the arrival of the Europeans into Africa. Moreover, Ghana had started trading early, where they operated with other communities. Their trade items included gold, cloth and copper among others. Moreover, the regime imposed tax to the goldmines in the region (Conrad 14). Mali was still under Ghana Empire, and did little in terms of trade. As a result, the economic capacity of Ghana was far much better as compared to that of Mali, their counterparts.
In the political aspect, Ghana had a well-organized system, with the Soninke people reigning over the Berbers. Moreover, the empire had captured a vast area and made it its kingdom. Mali was still under the Ghanaian Empire. The Ghanaian trade in gold had made the empire extremely powerful. Besides, the use of iron aided Ghana in creating weaponry for its territorial army. Furthermore, it was not until the Senegalese Almoravids intervention that capacitated the Malians to take over Ghana Kingdom (Conrad 14).
In addition, the Ghana Empire was extensively rich. This mainly resulted from the expansive gold trade within the region. This distinct trade in gold made Ghana change it earlier name (Wagadugu) to its present Ghana (meaning gold land). This gave Ghana an advantage over its former territory, Mali (Conrad 16). However, the ancient Ghana is different from the contemporary Ghana. Besides, the Ghana kings controlled the gold trade and could only allow the traders (including those from Mali territory) to trade only using gold dust.
It is evident that an empire needs to incorporate several features in its ruling in order to achieve its superiority nature. These factors include organized trade leading to economic capability, a strong army, and a vast empire with numerous territories. From the ninth century to 1300, Ghana was in this state. This made it extremely superior over its successor, Mali. However, internal clashes and external uprisings from the Almoravids led to its ultimate collapse and succession of Mali. Besides, Mali also collapsed later and was succeeded by Songhai. Thank you.”
Works Cited
Conrad, David, Empires of medieval West Africa: Ghana, Mali, and Songhay, New York, NY: Infobase Publishing, 2005, Print.
Read More
Share:
Tags
Cite this document
(“Ghana Essay Example | Topics and Well Written Essays - 500 words”, n.d.)
Retrieved from https://studentshare.org/history/1583274-ghana

CHECK THESE SAMPLES OF Ghana

...?Overview Every human being requires food for them to continue living and engaging in nation building. However, the environment we are living in has continued to undergo vigorous degradation which has affected weather patterns thereby resulting to unexpected extreme weather conditions such as floods and drought. In this essay, global food security will be discussed whereby statistics will be provided to show that a lot of people are dying and suffering due to hunger. Food security in Ghana will also be discussed whereby issues such as urbanization, poor infrastructure, poor government policies among others, will be noted as major challenges. Government responses to these challenges will also be discussed whereby it will...
7 Pages(1750 words)Essay

...? Religion and Theology: "Trokosi" Practice In Ghana Religion and Theology: "Trokosi" Practice In Ghana The practice of ‘Trokosi’ is usually described as a tradition that is basically a mixture of ancient cultural practices and religious customs. The term “trokosi” basically means “slave of the gods” in different Ghanaian tribes. ‘Trokosi’, in ancient Ghanaian society, existed as a type of retributive system where the virgin daughters of Ghanaian families that had sinned against the tribe of authorities in the tribe were taken by priests as compensation (Xfm 95.1 NewsCenter, 2008). By giving a daughter to live her life as a slave of the religious authorities of the tribes, families hoped to be spared...
5 Pages(1250 words)Essay

...Ghana Stock Market: Overcoming the Impediments to Sound Development and Efficient Market Performance Introduction 1. Stock Market Role The stock market plays an essential role in economic development because it is the best place for private individuals and corporations to raise long-term capital to create more wealth. Commercial banks provide such funds, yes, but credit obtained through the banking system has a generally short-term character and is inadvisable for high-risk development projects with long gestation periods (Osei, 1998). This may fall short of the requirement for meaningful and long-term corporate and economic growth. To illustrate how a stock market operates and spreads wealth in one country, let...
59 Pages(14750 words)Dissertation

...Culture, Domination and Resistance ; the structure of gender violence in Ghana The society in question is Ghana and the division of sexual rights and laws according to the interpretations of Michel Foucault and Angela Y. Davis. The cultural dichotomy in Ghana whereby young women are at the hands of the older women within their society and the constraints placed by them through the practice of female genital mutilation. Culturally, it has been a normative for women to be circumcised and it has been associated with either Islam or the patriarchal dimensions in which Ghana has been placed1 and that the rite itself is ancient. However, several...
3 Pages(750 words)Essay

...The Ghana Exercise A. Letter Accra, 10 November Dear The time point at which I will have to leave my position in the school is quite near. Before that moment comes, I have decided to share with you certain events of my life. These events are related to our country’s political history and I thought that they would help you to understand the current status and the future needs of Ghana’s political system. It was the 5th of June 1949 when I had the visit of my cousin. She had been informed that a new political party was about to be established and interest existed for individuals that could support its ideas. The philosophy of this political party, as my cousin explained to me, was close to my ideas:...
8 Pages(2000 words)Essay

...Ghana: A poor Nation with Natural Resource Abundance. Africa accounts for an approximated 50% of the total natural resources remaining on earth today. The continent still boasts of vast deposits of oil & gas, and minerals such as gold, bauxite, diamond and many others. This is an enviable position and in fact places the African continent at the forefront of the next economic and resource scramble. With major world powers being strapped of natural resources, an economic struggle seems to have sparked off with the developed nations fighting for the access of and control the vast resources held by African countries such as Ghana. For this reason Africa has poised to become the next frontier of economic...
8 Pages(2000 words)Research Paper

...﻿ Located in the sub region of West Africa along the Atlantic Ocean and the Gulf of Guinea, Ghana is one of Africa’s nations’ success stories. With its gorgeous hinterland, welcoming beaches, rich culture, and diverse wildlife the country is sometimes labeled as ‘Africa for beginners’. Ghana has for a long time been an example of a stable democracy to other African nations. Becoming the first sub-Saharan African nation to declare independence from colonial rule in 1957, Ghana has continued to be a beacon of hope for other nations within the continent in regard to a democratic political system. A study by the Global Peace Index ranked Ghana as Africa’s leading peace...
2 Pages(500 words)Essay
sponsored ads
Save Your Time for More Important Things
Let us write or edit the essay on your topic "Ghana" with a personal 20% discount.
GRAB THE BEST PAPER

Let us find you another Essay on topic Ghana for FREE!