The Cultural Dominance of the Christians - Essay Example

Comments (0)
Add to wishlistDelete from wishlist
Cite this document
Summary
The paper "The Cultural Dominance of the Christians" describe that Saint Paul was very important to the Christians because he was the author of a vast majority of the gospels of the New Testament. St. Paul strongly persecuted Christians till the time he had not converted to Christianity. …
Download full paperFile format: .doc, available for editing
HIDE THIS PAPERGRAB THE BEST PAPER92.4% of users find it useful 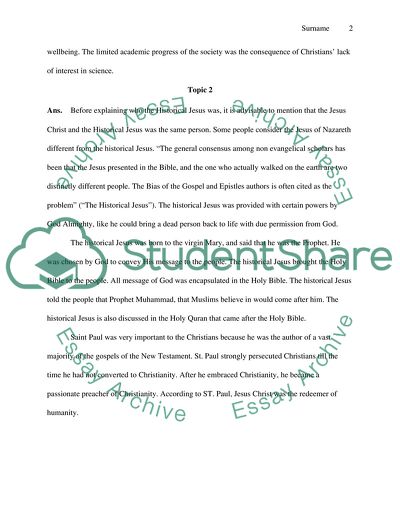 Extract of sample "The Cultural Dominance of the Christians"

﻿Topic 1
Ans. Illiteracy of the people was the fundamental element that characterizes the dark ages. They were limited only to the place where they were born. The law was violent towards those who traveled by roads. As all the old Roman Empire coins had been used, there was hardly any way left to conduct the trade but barter. Along with those coins, the recreational activities, philosophy and arts which had flourished due to the stable politics in Rome were also extinguished. The political instability caused the population to decline. “It is hard to imagine them [these years]. Historically, they are almost a blank, we only know that at the end of this period of rapine and death the region now called Europe was utterly changed” (Doren cited in Riley). It was fundamentally the cultural dominance of the Christians that had enabled the Europe to survive through this political instability. Another reason they are remembered as the dark ages is the fact that little, if any, first-hand account of that period could ever be found. That was so because owing to the lack of education, reading and writing were not the virtues of the people of that era.
It was the Christian church that learned during the Dark Ages. After the fall, instead of the Rome’s City of Man, people accepted the Augustine’s City of God. The converts had little concern with the materialistic world. They could sacrifice their status to attain the spiritual wellbeing. The limited academic progress of the society was the consequence of Christians’ lack of interest in science.
Topic 2
Ans. Before explaining who the Historical Jesus was, it is advisable to mention that the Jesus Christ and the Historical Jesus was the same person. Some people consider the Jesus of Nazareth different from the historical Jesus. “The general consensus among non evangelical scholars has been that the Jesus presented in the Bible, and the one who actually walked on the earth are two distinctly different people. The Bias of the Gospel and Epistles authors is often cited as the problem” (“The Historical Jesus”). The historical Jesus was provided with certain powers by God Almighty, like he could bring a dead person back to life with due permission from God.
The historical Jesus was born to the virgin Mary, and said that he was the Prophet. He was chosen by God to convey His message to the people. The historical Jesus brought the Holy Bible to the people. All message of God was encapsulated in the Holy Bible. The historical Jesus told the people that Prophet Muhammad, that Muslims believe in would come after him. The historical Jesus is also discussed in the Holy Quran that came after the Holy Bible.
Saint Paul was very important to the Christians because he was the author of a vast majority of the gospels of the New Testament. St. Paul strongly persecuted Christians till the time he had not converted to Christianity. After he embraced Christianity, he became a passionate preacher of Christianity. According to ST. Paul, Jesus Christ was the redeemer of humanity.
Works Cited:
Riley, Cam. “The Transition From Roman Empire to the Dark Ages.” n.d. Web. 27 Oct.
2011. .
“The Historical Jesus.” n.d. Web. 27 Oct. 2011.
. Read More
Share:
Tags
Cite this document
(“Short essay on Western History Example | Topics and Well Written Essays - 500 words”, n.d.)
Short essay on Western History Example | Topics and Well Written Essays - 500 words. Retrieved from https://studentshare.org/history/1582728-short-essay-on-western-history

CHECK THESE SAMPLES OF The Cultural Dominance of the Christians

What impact does emigration among ethnic Arab christians from the Middle East to the U.S. have on their identity crisis

...peninsula before the arrival of Islam. The dominance of the Muslim Arabism greatly threatened the existence of Arab Christians (Cragg 215). The phenomena of globalization and emigration played a vital role in the mitigation of an Arab Christian tribulation. This is because, globalization has transformed our ways, cultures and relationships, by making the movement of goods and services faster across the borders. In addition to this, the exchange of data and information has also been facilitated by globalization. Globlization, along with the increasing rate of migration, is widely changing our identities and cultural belongings (Suarez-Orozco160). It has...
10 Pages(2500 words)Dissertation

...?The Microsoft Dominance Microsoft contains the dominant market share in the Operating System Market, outshining Apple’s Macintosh when it comes to retaining a stake in the market. Microsoft has been phenomenal with holding a major share in the market for two decades, which can be attributed to the fact that they sell their OS to each and every hardware company. The paper tries to analyse the economic position of Microsoft and understand why they have been able to retain themselves as a monopoly in the market. Let us start with the definition of monopoly and then analyse the same definition with respect to the share controlled by Microsoft in the market. “A situation in which a single company or group...
4 Pages(1000 words)Essay

...?Roman Persecutions of Christians The attitude of the Romans to religion, in the early days of the empire, was very practical and tolerant. In fact the Romans added many of the gods of areas that they conquered, to their own pantheon of gods, and gave them Roman names. The Roman idea of religion was somewhat different from the generally accepted one. Romans considered religion as something of an attitude that was consistent with loyalty and unity to the state. They believed that the gods helped their cities and people to thrive, and any new customs that deviated from those that had been handed down from ancestors, would bring down the wrath of the gods upon them. Many historians are of the opinion, that the Romans...
6 Pages(1500 words)Essay

...these virtues are seen in nature. This implies that man should learn from God’s presence also through nature. 2.4 The sources of teachings followed and emphasized by Jews, Christians, and Muslims may be different. But the essence appears the same. For Jews, the emphasis comes from the Old Testament or Scriptures wherein Moses is the greatest prophet who gave God’s Laws. For Christians, the New Testament has greatly modified the Old Testament because of Jesus. Muslims follow the Quran. All believe in good relationships with God, fellowmen, and nature. (Denny, F.M., et. al. 2012) III. Material Culture 3.1 Jews consider materials to be far less important than their culture....
6 Pages(1500 words)Essay

...of war have identified themselves always with Christian faith, both from Catholic Denominations as well as Protestants5 (Kolb 1997). However, even though this theory has had dominance in understanding war and justifying it for centuries it has only recently been accepted fully by Christian theologians, philosophers, and jurists as a method that passes judgments of morality or immorality on specific conflicts that have transpired recently and those from a historical context as well. It is the general Christian conception concerning the Just War theory that has developed into the core of a secular belief system from Christians concerning the ethics and...
9 Pages(2250 words)Essay

Christians in the Empire

...Christians In The Empire Pliny) What threat did the early Christians pose to the Roman and how the early Christians were treated according to imperial policy The early Christians were not worshiping the emperor and the gods of the Empire, posing a direct threat to the Empire political and economic stability, and many people had become Christians as we can know when Pliny said: "For the matter seemed to me to warrant consulting you, especially because of the number involved. For the contagion of this superstition has spread not only to the cities but also to the villages and farms." Pliny also made clear that the Roman temples were almost empty and that...
4 Pages(1000 words)Essay

...” there were numerous cathedrals that had been dedicated to her name in most parts of Rome and Jerusalem and this was also the time within which art was also developing. After the Council of Ephesus, the went through a flourishing period of dedication to the Blessed Virgin in most parts of the East and the West and the quantity of this dedication was mostly brought out through art. This devotion was also propelled by the spread of Western Civilization, which had brought about the Anno Domini effect. The post Council of Ephesus was also dominated by the Marian devotion to art and Marian paintings. This marks the period in which most of the catacombs paintings were drawn and hence the reason why there was a great spread of...
14 Pages(3500 words)Essay

...of the Islam globally (Goddard, 1995). The region spoke a single language with the Arab missionaries enhancing the spread of both the Arab language and the culture, Sufis who were among the main missionaries in the religion interacted with the local population thereby teaching them about the faith. The spread of the Ottoman Empire coupled with the infusion of Islam in economic activities enhanced the rapid spread of the religion. In short, Islam spread rapidly since it occurred holistically. The spread of the Arab empire introduced new economic systems in the region. As the people engaged in trading, they traded the Islamic values. Such was not the case with Christianity. Christianity...
1 Pages(250 words)Essay

... due: Introduction Incomplete dominance is the condition that one of the allele is not completely dominated by the other paired allele, while codominance is the condition where the both alleles of a gene are present (Jones 217). For incomplete dominance, heterozygous genes are involved while homozygous genes are involved in codominance. This paper discusses their differences and examples in details. Differences Codominance has both homozygous recessive and homozygous dominant. Homozygous recessive have a recessive characteristic that the offspring’s phenotype has to have the features of both parents, while dominant homozygous result to phenotypes that produce a dominant characteristic from the parents. Contrary to that, incomplete... ...
1 Pages(250 words)Essay
sponsored ads
Save Your Time for More Important Things
Let us write or edit the essay on your topic "The Cultural Dominance of the Christians" with a personal 20% discount.
GRAB THE BEST PAPER

Let us find you another Essay on topic The Cultural Dominance of the Christians for FREE!