Comments (0)
Add to wishlistDelete from wishlist
Cite this document
Summary
The author focuses on Aztec, an impressive empire that operated in Tenochtitlan. The city of Tenochtitlan exhibited splendid resources like lakes, cities, and canals that were used for trade. Spanish rule in Cuba deployed spies under the leadership of Cortes to investigate Mexico’s ways of life. …
Download full paperFile format: .doc, available for editing
HIDE THIS PAPERGRAB THE BEST PAPER96.8% of users find it useful 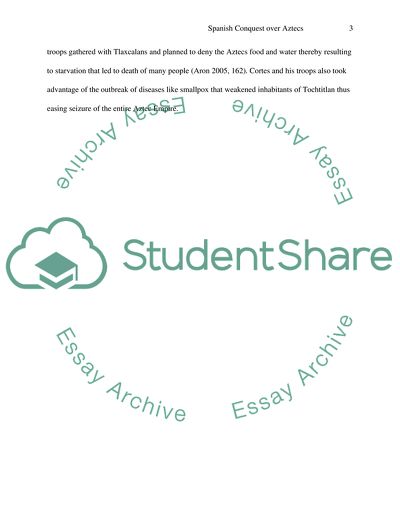 SPANISH CONQUEST OVER THE AZTECS Spanish Conquest over Aztecs Aztec was an impressive .empire that operated inTenochtitlan, Mexico. The city of Tenochtitlan exhibited splendid resources like lakes, beautiful cities and good canals that were used for trade. Due to its superb features, Spanish rule in Cuba deployed spies under the leadership of Herna Cortes to investigate Mexico’s ways of life and capture Christian slaves who would work in the European farms (Aron 2005, 160).
Upon arrival in Mexico, Cortes Chief commander and his loyal troops changed their plans of captivating slaves to desire for conquering Mexico (Aron 2005, 160). The conquest war would not be possible without the approval of King Charles V of Spain. For this reason Cortes wrote to the King claiming that Aztecs were hypocrites and that the ruling authority of the empire was brutal to its people. Upon obtaining the king’s approval, Cortes identified and liaised with the native friends who were foes of the Aztecs.
Cortes and his troops gained support of Cempoalans and the Tlaxcalans who were natives of Mexico (Boyer 2010, 279). On arriving in Tenochtitlan city, the existing populace thought that the White Cortes was their Quetzalcoatlin god whom they waited to return (Palfrey 2008). As a result of the illusion, Montezuma, emperor of the Aztec welcomed Cortes and provided him with everything to satisfy his troops. It is due to the perceived trust that Cortes strategized his plans to concede the objectives of conquest.
Cortes first captured and imprisoned Montezuma thereby driving the Aztecs into fear thus admitting their submission to the Spaniards. The Spaniards also conducted massive massacre in a religious function that continued to freeze the Aztecs (Hassig 2006, 9). In 1521, Cortes and his troops gathered with Tlaxcalans and planned to deny the Aztecs food and water thereby resulting to starvation that led to death of many people (Aron 2005, 162). Cortes and his troops also took advantage of the outbreak of diseases like smallpox that weakened inhabitants of Tochtitlan thus easing seizure of the entire Aztec Empire.
Bibliography
Aron, P., 2005, Mysteries in history: from prehistory to the present, Santa Barbara, CA; ABC-CLIO Publishing.
Boyer, J., 2010, The Plaid Avengers World, 4th Ed, Kendall Hunt Publishing.
Hassig, R., 2006, Mexico and the Spanish conquest, 2nd Ed, Norman; University of Oklahoma Press
Palfrey, D., 2008, The Spanish Conquest (1519-1521), Retrieved October 16, 2011 from http://www.mexconnect.com/articles/1538-the-spanish-conquest-1519-1521 Read More
Share:
Tags
Cite this document
(“Spanish Conquest over Aztecs Essay Example | Topics and Well Written Essays - 250 words - 35”, n.d.)
Spanish Conquest over Aztecs Essay Example | Topics and Well Written Essays - 250 words - 35. Retrieved from https://studentshare.org/history/1581944-essay

CHECK THESE SAMPLES OF Spanish Conquest over Aztecs

...?Analyzing a Concept Essay on Aztecs Aztecs were ancient Nahuatl-speaking people whose civilization flourished in Central Mexico from the 12th century AD until they were conquered by the Spanish led by Cortes in 1519. Aztec history is one of the best preserved records of the Mesoamericans. The Aztecs were a nomadic tribe living in northern Mexico for centuries before they migrated to the highlands of central Mexico in the 12th century. The power of the Aztecs began to rise in the 14th century, and by the 16th century they were dominating central Mexico and up to present-day Guatemala in the south. Being the last in a series of...
3 Pages(750 words)Essay

Victor & Vanquished: Spanish & Nahua Views of the Conquest of Mexico

...and studied since it was epic and led to total destruction of a magnificent culture. This paper will seek to give an analysis of Victor and Vanquished, a book describing the views of the Spaniards and Nahua during the Conquest of Mexico. This book discusses war and conquest and adds some information on the growing attitude towards the European Expansionism. The war was about taking over an entire kingdom whereby the Spaniards destroyed a deep-rooted culture of the Mexicans by killing or forcing them to become or join their beliefs, which included Christianity. In the book, the story describes the growth of the Spaniards and their subsequent takeover of the Aztec Empire....
6 Pages(1500 words)Book Report/Review

The Spanish Conquest of the Aztecs

...The Spanish Conquest of the Aztecs The Spanish Conquest of the Aztecs was: a holocaust or a necessity? This was a holocaust distinctive in the way Spaniards assailed defenceless adherents who knew about their attackers’ intentions (Silberman & Alexander 179). The attackers massacred them using all manner of weapons resulting to the extermination of more than 3,000 people. The manner in which Spaniards executed this incidence implies it was a calculated move whose intention encompassed aiding them to realize their dreams. Hence, it was not necessity for its intention encompassed eliminating the natives (Silberman & Alexander 179). This is...
2 Pages(500 words)Essay

The Spanish Conquest and its aftermath/legacy

...the payment for the ransom had been effected (Sale, 1991). Therefore, the Inca emperor was destroyed and collapsed after the death of their leader. Another emperor who was arrested is Aztec Emperor, Moctezuma and this also led to the collapse of the Emperor totally changing their political systems as they took over the control of Tenochtitlan and its surrounding territories to build Mexico City upon the ruins (León-Portilla, 2006). Responses of the Native Tribes The responses of the native tribes to the Spanish conquest were mixed. The enslavement and forced Catholicism a lot of rebellion amongst the natives as it was a catastrophic experience (León-Portilla, 2006)....
7 Pages(1750 words)Essay

Conquest of Mexico by Spanish Conquistadors

...Conquest of Mexico by Spanish Conquistadors During the years when Latin America was being conquered, Hernan Cortes served as one of the most influential and popular conquistadors from Spain. He gained notable popularity after winning Aztec empire before winning Mexico for the Spaniards. Cortes also facilitated in the colonization of Cuba before serving as New Spain’s governor. As a young boy, for instance, Cortes was developed notable interest in the Age of Exploration (Schmal). In 1504, he embarked on a mission to sail to the New World when aged 19 years. While in Hispaniola for seven years, he used to serve as a farmer and a notary. In 1511, he embarked on an expedition with Diego...
3 Pages(750 words)Essay

Was the conquest of Spanish America an ambivalent conquest

...WAS THE CONQUEST OF SPANISH AMERICA AN AMBIVALENT CONQUEST? In the 1517-1570, there was conquestand colonization that took place in Spain. According to research done by various parties colonization and conquest are not events but processes that affect the victims and the conquerors1. To measure the degree of the change in the victims and the conquerors, it is crucial for one to understand the culture of the conquered society. The Mayan and the Spanish societies underwent a hard period during the colonization process. In this view, the essay develops a clear and concise argument in answering the question “Was the conquest of...
4 Pages(1000 words)Essay

Finances and Management of Marstons Plc and Whitbread Plc

10 Pages(2500 words)Research Paper
sponsored ads
Save Your Time for More Important Things
Let us write or edit the essay on your topic "Spanish Conquest over Aztecs" with a personal 20% discount.
GRAB THE BEST PAPER

Let us find you another Essay on topic Spanish Conquest over Aztecs for FREE!