What were the main features of the African slave trade, and what effects did it have on Africa Restrict your answer to the period before 1800 - Essay Example

Comments (0)
Add to wishlistDelete from wishlist
Cite this document
Summary
The passage to the European continent would make it almost impossible for the slaves to reach their destiny since the ones involved in the trade…
Download full paperFile format: .doc, available for editing
HIDE THIS PAPERGRAB THE BEST PAPER95.6% of users find it useful 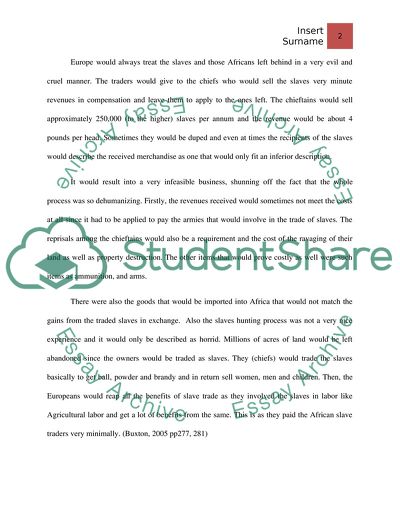 Extract of sample "What were the main features of the African slave trade, and what effects did it have on Africa Restrict your answer to the period before 1800"

Features of African Slave Trade in the 18th Century During the 18th Century about 150,000 human beings would be ferried from Africa via the Atlantic to be sold to Europeans as slaves. The passage to the European continent would make it almost impossible for the slaves to reach their destiny since the ones involved in the trade knew it was contraband and thus their aim was to conceal their trade as much as possible.
One of those involved in this trade was the Portuguese’s colony governor and it was very hard to convince him to comment anything that would lead the researcher that they were involved in such trade. This in fact was the worst slave trade in history according to the author. (Buxton, 2005 p16)
Africans in general, the ones involved in the slave trade and those who were left, faced a lot of pain. It was total horror and disgust to Africans as they went through the miseries. The territories left behind by the slaves would become wilderness and expose the villages to a great extent of conflagration and chaos. Their children would be kidnapped and murdered in pursuit of some inferior supplies from the continent of Europe.
Europe would always treat the slaves and those Africans left behind in a very evil and cruel manner. The traders would give to the chiefs who would sell the slaves very minute revenues in compensation and leave them to apply to the ones left. The chieftains would sell approximately 250,000 (to the higher) slaves per annum and the revenue would be about 4 pounds per head. Sometimes they would be duped and even at times the recipients of the slaves would describe the received merchandise as one that would only fit an inferior description.
It would result into a very infeasible business, shunning off the fact that the whole process was so dehumanizing. Firstly, the revenues received would sometimes not meet the costs at all since it had to be applied to pay the armies that would involve in the trade of slaves. The reprisals among the chieftains would also be a requirement and the cost of the ravaging of their land as well as property destruction. The other items that would prove costly as well were such items as ammunition, and arms.
There were also the goods that would be imported into Africa that would not match the gains from the traded slaves in exchange. Also the slaves hunting process was not a very nice experience and it would only be described as horrid. Millions of acres of land would be left abandoned since the owners would be traded as slaves. They (chiefs) would trade the slaves basically to get ball, powder and brandy and in return sell women, men and children. Then, the Europeans would reap all the benefits of slave trade as they involved the slaves in labor like Agricultural labor and get a lot of benefits from the same. This is as they paid the African slave traders very minimally. (Buxton, 2005 pp277, 281)

(What Were the Main Features of the African Slave Trade, and What Essay)
https://studentshare.org/history/1581897-what-were-the-main-features-of-the-african-slave-trade-and-what-effects-did-it-have-on-africa-restrict-your-answer-to-the-period-before-1800.

“What Were the Main Features of the African Slave Trade, and What Essay”, n.d. https://studentshare.org/history/1581897-what-were-the-main-features-of-the-african-slave-trade-and-what-effects-did-it-have-on-africa-restrict-your-answer-to-the-period-before-1800.
Comments (0)
Click to create a comment or rate a document

CHECK THESE SAMPLES OF What were the main features of the African slave trade, and what effects did it have on Africa Restrict your answer to the period before 1800

...that slave trade should have never been started is impeccably sound. Picture 2 Poster Announcing Sale and Rental of Slaves, Saint Helena (South Atlantic), 1829 This picture belongs to the category ‘Slave Sales and Auctions: African Coast and the Americas’. This particular picture has been chosen with the objective of revealing that there existed no difference in the way goods were traded and men and women were purchased and sold in the name of slave trade. This piece of advertisement was not for the auction of non-living stock or domestic animals but for...
2 Pages(500 words)Essay

The Effects of the African Slave Trade

...in the name of profit. The millions of African lives that were exchanged for rifles and gunpowder for them to kill each other, and trinkets such as clothes, brandy and ironmongery were unthinkable. The exchange was unequal and inequitable, but for as long as there is profit, lives were sacrificed. The materials exchanged for African lives may have long been spent but the effect of the trade of which those materials were used to pay African lives can still be felt until today. It did not only stripped Africa of its capability to develop...
5 Pages(1250 words)Term Paper

...﻿The ancient slave trade was widespread in several parts of the world remains one of the most interesting accounts that historians seek to explore and understand. Ancient slave trade was mainly based in Africa with European traders involved in exchange of slaves with other valuables. Characterized by different practices as well as modes of implementation, different accounts put forth by individuals who were either directly or indirectly involved in slavery provide different levels of knowledge relevant in understanding ancient slavery. Mary Prince and John Barbot accounts on slavery have been unanimously...
6 Pages(1500 words)Essay

Resistance against Hitler and his Nazi Regime

..., as the slaves went farther south, the lower South states deduced that the upper South was beginning to change its perspective on slavery. This difference provoked a deep debate over the reopening of the African slave trade. (Deyle, 2004) The areas of the Deep South saw that new imports would allow Virginia to remain a loyal slave state. However, Virginia did not want newly-arrived slaves to diminish the value of its existing human property. Perceiving that slavery was under attack and fearing the loss of Virginia to the free states, the lower South decided to seced. The Deep South forced Virginia into secession. At...
8 Pages(2000 words)Essay

...was conquered, no more masonry has been found. On the East African Coast, East African Literature emerged. The earliest East African literature can be dated to 1520. This work was an anonymous history of Kilwa. This text was written in Arabic. Later literature, poems, and religious text in Swahili appeared. Clearly, as in South Africa, a vibrant culture existed before and during colonization. Finally, the last parallel was the process of colonization. Whether the Portuguese, Dutch, or any other European country, the colonization process used Africans. Africans were used to plunder...
2 Pages(500 words)Essay

...﻿African Slave Trade The slave trade started in the 14th century across the Sahara through the red sea. Initially the European took the African through force and kept them as servants for rich (Newman, pp. 40-42). They justified the slavery by saying that they were giving African an opportunity to become Christian. In 15th century, the Portuguese interests in Africa changed from the gold found in the country to much available commodity that is slaves. The trade began for a simple reason that is the growing European empire lacked in one main resource, which was labor for agriculture and industrial purposes. Spanish trader in the 1503 also took many Africans as slaves. Bartering of goods produced outside Africa with slaves further... ...
1 Pages(250 words)Essay

...racism and economic profit. Labor shortage was primarily responsible for Atlantic slave trade. Initially natives were utilized for slave labor. But with their death due to overwork and diseases, alternative sources of labor were to be sought. It was always profitable and cost effective for the Europe to export goods and crops from the New World as many crops could not be grown in Europe. As there was a need to export crops and goods, Western Africa and Central Africa became the main sources for providing enslaved people. REFERENCE Roger Anstey, ‘Capitalism and slavery: A Crtique’,...
2 Pages(500 words)Essay

...﻿Slavery And Slave Trade Slavery and slave trade proved to a menace in the 17th and 18th centaury. The rush for cheap labor prompted many to explore Africa. The availability of labor led to slave trade this was enhanced by various factors and well-organized and coordinated nature of doing business. After many Africans where affected with the trade, they developed strategies to enable them fight against the oppressive nature. The essay will explore various methods the Africans deployed to fight slavery. The movie Sankofa will lay basis of our discussion. Themes draw from...
3 Pages(750 words)Essay

The Transatlantic Slave Trade and Its Effects on Africa

...Transatlantic Slave Trade Transatlantic Slave Trade Slavery is among the oldest s that spread rapidly throughout the world. It existed in the Western Hemisphere, Europe, Middle East, Asia and vast parts of Africa for a long time. It took its roots before the emergence of any religion in the world. The principles that governed it were so peculiar. In most occasions, slaves worked tirelessly in order to meet their needs and the needs of the lords at very low pay. The main victims of the slave trade were the black people. According to...
10 Pages(2500 words)Research Paper
sponsored ads
Save Your Time for More Important Things
Let us write or edit the essay on your topic "What were the main features of the African slave trade, and what effects did it have on Africa Restrict your answer to the period before 1800" with a personal 20% discount.
GRAB THE BEST PAPER

Let us find you another Essay on topic What were the main features of the African slave trade, and what effects did it have on Africa Restrict your answer to the period before 1800 for FREE!