Comments (0)
Add to wishlistDelete from wishlist
Cite this document
Summary
The world, in recent history, has been viewed as a stage for humankind to pursue his self-interests in asserting dominance over the rest of the species in the universe. To achieve these goals, man had to formulate laws to govern and control the activities of fellow man and…
Download full paperFile format: .doc, available for editing
HIDE THIS PAPERGRAB THE BEST PAPER99% of users find it useful 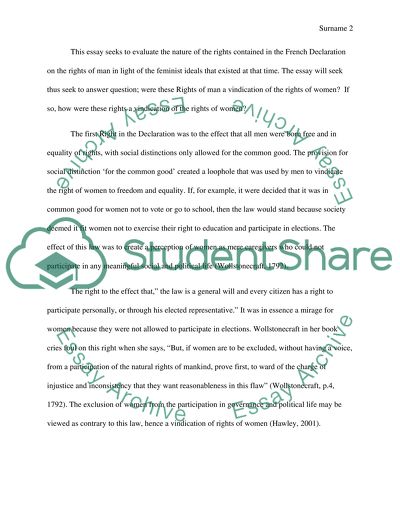 Task Differentiate between declaration and Vindication of the Rights of Woman Introduction The world, in recent history, has been viewed as a stage for humankind to pursue his self-interests in asserting dominance over the rest of the species in the universe. To achieve these goals, man had to formulate laws to govern and control the activities of fellow man and instill values that governed his relation with fellow men. It is the content of these laws that has been the subject of widespread critic, especially by feminists, in that the term ‘man’ has been used selectively to exalt the rights of men folk above those of the women folk.
The law as, an instrument of social ordering, was thus seen a tool for exalting the self-interests of the male sex over the interests of the female sex. This led to the rise of feminist ideas that sought to bring out the inequalities between the two sexes, with the feminists arguing that the male gender was using the law to oppress and maintain dominance over the female sex. The feminists argued that the laws were tools of social ordering, which sought to oppress the rights of women.
This essay seeks to evaluate the nature of the rights contained in the French Declaration on the rights of man in light of the feminist ideals that existed at that time. The essay will seek thus seek to answer question; were these Rights of man a vindication of the rights of women? If so, how were these rights a vindication of the rights of women?
The first Right in the Declaration was to the effect that all men were born free and in equality of rights, with social distinctions only allowed for the common good. The provision for social distinction ‘for the common good’ created a loophole that was used by men to vindicate the right of women to freedom and equality. If, for example, it were decided that it was in common good for women not to vote or go to school, then the law would stand because society deemed it fit women not to exercise their right to education and participate in elections. The effect of this law was to create a perception of women as mere caregivers who could not participate in any meaningful social and political life (Wollstonecraft, 1792).
The right to the effect that,” the law is a general will and every citizen has a right to participate personally, or through his elected representative.” It was in essence a mirage for women because they were not allowed to participate in elections. Wollstonecraft in her book cries foul on this right when she says, “But, if women are to be excluded, without having a voice, from a participation of the natural rights of mankind, prove first, to ward of the charge of injustice and inconsistency that they want reasonableness in this flaw” (Wollstonecraft, p.4, 1792). The exclusion of women from the participation in governance and political life may be viewed as contrary to this law, hence a vindication of rights of women (Hawley, 2001).
The right to the freedom to do everything that does not injure fellow men and assure enjoyment of the right by fellow citizens had the effect of denying women equal participation in social life. This is because women were expected to subjective to their husbands and not engage in activities that may shame the husband or portray her home unfavorably. This limited the women social activities and sought to restrain her from engaging in social activities. This was in essence a vindication of women rights because they were barred from participating in activities afforded to them by the rights in the Declaration.
Conclusion
Although the right of man contained in the declaration is universal and meant to be enjoyed by all, it limits enjoyment to the women folk and is often used to tyrannize women. The exclusion from participation in governance and political life due to their sex acts a vindication of their right to equality and freedom. This is also evident on their exclusion from equal educational chances and limited privileges in social participation. All this serves to maintain dominance of the men over the women thus keeping them in control on all fronts of the society. Viewed this way, the Declaration on the Rights of man is becomes a vindication of the rights of the women.
Works Cited
Mary Wollstonecraft, A Vindication of the Rights of Woman (1759).
Trish Hawley, A Rediscovered Feminist Vision: Mary Wollstonecraft and Global Education
for Girls and Women, 2001. Read More
Share:
Tags
Cite this document
(“Differentiate between declaration a Vindication of the Rights of Woman Essay”, n.d.)
Differentiate between declaration a Vindication of the Rights of Woman Essay. Retrieved from https://studentshare.org/history/1581299-differentiate-between-declaration-a-vindication-of-the-rights-of-woman

“Differentiate Between Declaration a Vindication of the Rights of Woman Essay”, n.d. https://studentshare.org/history/1581299-differentiate-between-declaration-a-vindication-of-the-rights-of-woman.
Comments (0)
Click to create a comment or rate a document

...and psychoanalytic feminists. Radical feminists raise the argument that patriarchal societies have not acknowledged or recognized that being a woman should be viewed as positive. They also argue that physical violence dominates a patriarchal society; to them, the best way to defeat patriarchy can be through the establishment of strength and value in women. Women should also develop a critical approach to dealing with patriarchy, establish trust with one another, and form networks to advocate for their rights both in the private sphere and the public sphere. The focus of psychoanalytic feminists involves the explanation of power relations between women and men based on Freud’s theory....
28 Pages(7000 words)Essay

...? Women and Human Rights The major provisions in International Law for the promotion and the protection of the rights of women There are four main documents in International Law directed on protection and promotion of the rights of women. The first document is Convention on the Elimination of All Forms of Discrimination against Women. It was acclaimed in New York on18 December 1979 (Haan, 2010). This document proclaims that women should be protected by the government against discrimination. Numerous aspects connected with gender discrimination are considered in this document. Another regulative document is Declaration on the Protection of Women and Children in Emergency and Armed Conflict acclaimed on 14 December 1974 (Haan, 2010... ). This...
4 Pages(1000 words)Essay

Mary Wollstonecrafts - A Vindication of the Rights of Woman

...Mary Wollstonecraft’s “A Vindication of the Rights of Woman” Introduction Known as “Mother of Feminism”, Mary Wollstonecraft is one of the earliest feminist ladies who pour out her personal feminist thoughts in the classic essay, “A Vindication of the Rights of Woman”. The essay is a direct attack on the restrictions imposed on women’s education that bred in them “ignorance and slavish dependence.” Thus, her fight for her sex to gain a better educational system was very logically and persuasively penned down in her essay and is a must read by everyone who wants to understand the feminist stream of studies. Various feminist movements...
3 Pages(750 words)Personal Statement

The Declaration of Human Rights

...? DECLARATION The Declaration of Human Rights Introduction The of this essay is actually The Universal Declaration of Human Rights (UDHR) adopted by the General Assembly of the United Nations in 1948 in an effort to prevent a recurrence of World War II atrocities, including but not limited to the massacre of 6 million Jews. (un.org) It was drafted by a panel including not only representatives of Western democracies but also the USSR, and lead by Eleanor Roosevelt, widow of the US wartime president. Although there were 8 abstentions, there were no dissenters among the member states supporting the UDHR. This document is considered the foundation for later...
3 Pages(750 words)Essay

Differentiate between Prejudice and Discrimination

...class led to the development of prejudice, which eventually led to discrimination. The social learning theory can also be developed to include the fact that social categorization can be a source of discrimination. In its barest definition, this means that a society develops the mentality of “us” versus “them”, which means that individuals try to enhance their desirability by associating with social groups (Myers 280). This means that different social groups develop, which leads to a tendency o compete, and the opposite group is usually discriminated against. This theory can also apply to Jane Elliot’s class video, since the differentiation by eye color effectively created two different social groups in the class. After...
3 Pages(750 words)Essay

Mary Wollstonecrafts A Vindication of the Rights of Woman

...Despite of the fact that the majority of Enlighteners stood on patriarchal positions, ideas in protection of female rights and female emancipation for the first time have been stated during the epoch of Enlightenment. It is significant that one of the first who has formulated these ideas was a woman - Mary Wollstonecraft (1759-1797) in her book "A Vindication of the Rights of Woman" (1792). Mary Wollstonecraft's work actually is the first feministic project in history. "One of the results of the resurgence in feminist scholarship over the past twenty-five years has been the inclusion of Mary Wollstonecraft in the ranks of early modern political...
8 Pages(2000 words)Essay

...UN’s Declaration of Human Rights Gone Awry: Ignoring the Victim and Shielding the Perpetrator With the global onslaught of war, poverty, violence against women and children, AIDS and racial discrimination, protecting human rights seems to be a daunting and elusive task for the United Nations. The Universal Declaration of Human Rights (UDHR) is the pioneering document of modern human rights doctrine. Adopted by the United Nations General Assembly in 1948, it was composed by an international committee of experts representing a ecumenical range of ethical traditions. However, human rights advocate point an accusing finger at...
9 Pages(2250 words)Essay

Differentiate between Management and Leadership

... This paper exhibits an insight into the eminent distinction between the two important concepts viz. management and leadership. Both the conceptions are of utmost importance in the context of proper organizational functioning and development of healthy organizational culture. Nevertheless these two terms are widely misunderstood and sometimes even interchanged for each other in a heedless manner. Discrimination between the two locutions and the underlying concepts is indispensable in order to apprehend the role played by each of them in the sustainable success of an organization. Hence, the paper draws out the distinction underlying the concepts of management and leadership, and investigates into the roles played by leadership... in the...
5 Pages(1250 words)Essay

...– should be considered as absolutely justified. III. Capitalism and human rights Another political issue that should be examined simultaneously with the nationalism is the capitalism. In this case it is highlighted by the writer that ‘there appears to be a clear contradiction between capitalist develop­ment, which is determined by hierarchical governance through capi­talist insti­tutions, on the one hand, and national autonomy and control by the nation state (which, usually, is taken to imply some degree of democratic participation in the determination of national goals), on the other’ (Ch. 2, pg. 5). Such a differentiation could be possible lead to complex assumptions however it is...
14 Pages(3500 words)Essay
sponsored ads
Save Your Time for More Important Things
Let us write or edit the essay on your topic "Differentiate between declaration a Vindication of the Rights of Woman" with a personal 20% discount.
GRAB THE BEST PAPER

Let us find you another Essay on topic Differentiate between declaration a Vindication of the Rights of Woman for FREE!