Comments (0)
Add to wishlistDelete from wishlist
Cite this document
Summary
The Declaration of Independence was a document that was ratified by congress on July 4, 1776 announcing that thirteen colonies of America which were at war with Great Britain had declared themselves independent states. Its chief architects were Thomas Jefferson and John Adams…
Download full paperFile format: .doc, available for editing
HIDE THIS PAPERGRAB THE BEST PAPER94.6% of users find it useful 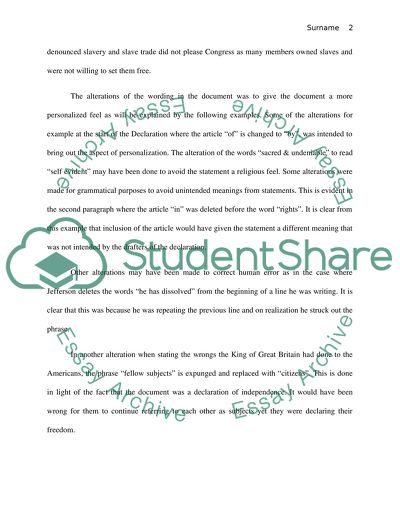 Extract of sample "Declaration of Independence"

Comparison between Jefferson’s initial Declarations on Independence And the final version The Declaration of Independence was a document that was ratified by congress on July 4, 1776 announcing that thirteen colonies of America which were at war with Great Britain had declared themselves independent states. Its chief architects were Thomas Jefferson and John Adams. It was an official explanation as to why Congress had voted to declare the thirteen colonies independent from Great Britain. This took place a little after a year of war with Great Britain. July 4th, the year that the Declaration was approved by Congress is still celebrated as Independence Day in America.
There is no big difference between the initial Declaration and the final version. Most of the wording was retained as it was in the initial document. Very minimal alterations were made on the document.
In comparing Jefferson’s initial Declaration with the final version, it can be noted that most of the alterations made were on the wording in the document. This was more for the purpose of clarity than for alteration of meaning of the words in the Declaration. Of the draft presented to Congress, only two passages were rejected directly by Congress. One of the passages referred to the English people in an inappropriate manner which did not go down well with congress since even the Americans were of British roots. The other passage which denounced slavery and slave trade did not please Congress as many members owned slaves and were not willing to set them free.
The alterations of the wording in the document was to give the document a more personalized feel as will be explained by the following examples. Some of the alterations for example at the start of the Declaration where the article “of” is changed to “by”, was intended to bring out the aspect of personalization. The alteration of the words “sacred & undeniable” to read “self evident” may have been done to avoid the statement a religious feel. Some alterations were made for grammatical purposes to avoid unintended meanings from statements. This is evident in the second paragraph where the article “in” was deleted before the word “rights”. It is clear from this example that inclusion of the article would have given the statement a different meaning that was not intended by the drafters of the declaration.
Other alterations may have been made to correct human error as in the case where Jefferson deletes the words “he has dissolved” from the beginning of a line he was writing. It is clear that this was because he was repeating the previous line and on realization he struck out the phrase.
In another alteration when stating the wrongs the King of Great Britain had done to the Americans, the phrase “fellow subjects” is expunged and replaced with “citizens”. This is done in light of the fact that the document was a declaration of independence. It would have been wrong for them to continue referring to each other as subjects yet they were declaring their freedom.
Many of the word alterations as seen from the given examples were done for the purpose of minding the language used when addressing the people. The Declaration was meant to instill confidence to the people which could be best achieved by a well written document. It was also done to ensure that the declaration conveys its intended meaning in the best way possible.
Deletion of the two passages
This may be the only alterations done to the Declaration that bore a significant impact on the aftermath of the declaration. The first passage which had extreme references to the English people may have been rejected because the Americans were of British decent. The second passage was rejected for selfish reasons. It advocated for the freeing of slaves. A majority of representatives owned slaves and were not about to let them go. This resulted in rejection of the passage.
In conclusion it is prudent to noted that although several alterations were done on the initial declaration, the final draft still retained its intended meaning and served its purpose.

CHECK THESE SAMPLES OF Declaration of Independence

...? How does the "Declaration of Independence" connects with Susan B Anthony's "Women's rights to vote"? And How it connects to human rights (27.10.11)Human rights are the rights that people have for the simple reason that they are human beings. Although the term became more common only during the twentieth century, the concept of human rights is known to have been used in the seventeenth and eighteenth centuries in Europe. At the same time the idea of human rights is not existent in all societies and advanced civilizations. But rights cannot be considered to be the same as sets of behaviors that can be punished or required to be necessarily implemented by law or that can be unfair to people or utilized for...
3 Pages(750 words)Essay

...A Declaration of Independence Thomas Jefferson was born to Peter Jefferson and his wife in 1743 (Jefferson, 2). Hewas the favorite child among 10 others and his father desired that he would access education. The death of his father in 1760 resulted for his schooling as a way to fulfill his wishes. His love for politics led him to study the political and parliamentary life of Europe and its influence in America. Jefferson studied law and later wrote several articles on law and management. This, however, did not kill his love for farming. According to Jefferson, America would build and develop its economy through agriculture, which should be enhanced (Jefferson, 3). Onuf noticed that America was undergoing...
4 Pages(1000 words)Research Paper

...﻿Declaration of Independence Introduction On Independence Day every year, millions of Americans turn out for myriad parades, public and backyard barbecues, concerts of patriotically stirring music and spectacular pyrotechnic displays, and they do so to celebrate the day on which we declared our independence from Great Britain. But America did not declare its independence on July 4, 1776. That happened two days earlier, when the Second Continental Congress approved a resolution stating "these United Colonies are, and of a right should be, free and independent States." The resolution itself had first been...
5 Pages(1250 words)Essay

...Injuries and Usurpations: Colonial Justification for Independence Yuliya Injuries and Usurpations: Colonial Justification for Independence The words of the Declaration of Independence suggest several reasonings to justify the colonists freedom from what was considered a tyrannical leadership regime: The King of Great Britain. Within the text of this document, the injuries and usurpations of this king were spelled out to specifically acknowledge why independence was to be declared. Primarily, the colonists believed that the laws of Great Britain were incompatible with the needs of the people of the colonial United States. In the...
2 Pages(500 words)Essay

...The social nature of the Declaration of Independence School What was the use of the document? The Declaration of Independence was a document penned on July 4, 1776 by the then Continental Congress announcing war against the British empire from the American states as the British Empire failed to meet the needs of the American states and hence sought independence and not wanted to form a part of the British Empire (US Department of the Historian). John Adams wanted to make a resolution during early 1776 and hence created a committee. The tasks was entailed to Thomas Jefferson and passed on July 4th 1776 by the Continental Congress. The main use of the...
2 Pages(500 words)Essay

... The Declaration of Independence The United s declaration of independence is a ment written by Thomas Jefferson.It was used by the second continental congress on July 4, 1776 to declare that the thirteen colonies that were in battle with Great Britain would cease to be part of the British Empire. Under such a theme, it is a very powerful document in the history and formation of the United States, and the end of colonial rule in the country. The declaration is simply a formal documentation of why the congress voted in the aim of declaring independence from Great Britain after some time following the outbreak of American Revolution. The independence day of the United States is celebrated on July, 4 as approved by the congress... is perhaps one...
2 Pages(500 words)Term Paper
sponsored ads
Save Your Time for More Important Things
Let us write or edit the essay on your topic "Declaration of Independence" with a personal 20% discount.
GRAB THE BEST PAPER

Let us find you another Essay on topic Declaration of Independence for FREE!