Comments (0)
Add to wishlistDelete from wishlist
Cite this document
Summary
The people involved in the organization and those who led the revolutionary war are both top civilians in the nation. They are among the highest ranking…
Download full paperFile format: .doc, available for editing
HIDE THIS PAPERGRAB THE BEST PAPER92.1% of users find it useful 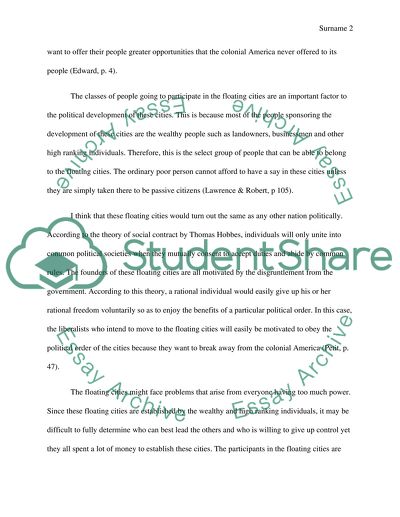 Floating Cities Vs Colonial America The Seasteading Institute builds permanent dwellings or homesteads on the sea for people to live in the marine surrounding. The people involved in the organization and those who led the revolutionary war are both top civilians in the nation. They are among the highest ranking citizens. For example, the liberalists such as the founder of PayPal who support the floating cities are high ranking, rich and influential individuals. The leaders of the America revolutionary war were also high ranking, influential and top officials especially from the military, most of them holding ranks of commanders. Most of these people are also Native Americans. The differences between them include the fact that liberalists are mostly rich citizens who have well-established businesses with no affiliation to the government. They do not work for the government and they want to break away from it. The leaders of the American revolutionary war work for the government through the military. They support the government and are against anyone who opposes it, including the liberalists (David, p. 12).
I do not think that the colonial cities offer the same opportunities that colonial America offered citizens of other nations. This is because the founders of these floating cities want to be liberalized and are motivated by breaking as far away from the government as possible. They want to offer their people greater opportunities that the colonial America never offered to its people (Edward, p. 4).
The classes of people going to participate in the floating cities are an important factor to the political development of these cities. This is because most of the people sponsoring the development of these cities are the wealthy people such as landowners, businessmen and other high ranking individuals. Therefore, this is the select group of people that can be able to belong to the floating cities. The ordinary poor person cannot afford to have a say in these cities unless they are simply taken there to be passive citizens (Lawrence & Robert, p 105).
I think that these floating cities would turn out the same as any other nation politically. According to the theory of social contract by Thomas Hobbes, individuals will only unite into common political societies when they mutually consent to accept duties and abide by common rules. The founders of these floating cities are all motivated by the disgruntlement from the government. According to this theory, a rational individual would easily give up his or her rational freedom voluntarily so as to enjoy the benefits of a particular political order. In this case, the liberalists who intend to move to the floating cities will easily be motivated to obey the political order of the cities because they want to break away from the colonial America (Petit, p. 47).
The floating cities might face problems that arise from everyone having too much power. Since these floating cities are established by the wealthy and high ranking individuals, it may be difficult to fully determine who can best lead the others and who is willing to give up control yet they all spent a lot of money to establish these cities. The participants in the floating cities are motivated by breaking away from being ruled by a government that they deem ineffective. Other important issues also include safety and security and access to materials found on dry land (Stephen, p. 92).
Works cited
David, M. Congress: The Electoral Connection. Yale: Yale University Press, 2004. Print.
Edward, O. W. Sociology: The New Synthesis. Harvard: Belknap Press of Harvard University Press, 2000. Print.
Lawrence, R. J. & Robert, Y. S. Politicians Dont Pander: Political Manipulation and the Loss of Democratic Responsiveness. Chicago: University of Chicago Press, 2000. Print.
Pettit, P. Republicanism: A Theory of Freedom and Government, New York: Oxford University Press, 1997. Print.
Stephen, S. The Politics Presidents Make: Leadership from John Adams to Bill Clinton. Harvard: Harvard University Press, 1997. Print. Read More
Share:
Tags
Cite this document
(“Floating cities vs colonial America Essay Example | Topics and Well Written Essays - 250 words”, n.d.)
Floating cities vs colonial America Essay Example | Topics and Well Written Essays - 250 words. Retrieved from https://studentshare.org/history/1581040-floating-cities-vs-colonial-america

CHECK THESE SAMPLES OF Floating cities vs colonial America

The oncept of Teamwork

...﻿Religion in colonial America One of the key reasons for everyone coming to Colonial America was to practice religion freely and according to one’s own preferences and choices. Religion was a free choice for a woman following Protestant religious ideology; however, it was increasingly becoming necessary to follow the strict religious practices. Since responsibility to take care of home was on my shoulders as a woman, I had to ensure that I followed religious teachings in bringing up children, dealing with family members and giving preferences to others, while, at the same time, adapting the role of caring for others. Boston as a town was small but flourishing and was...
4 Pages(1000 words)Essay

...?As a direct result of the fact that both the Spanish Empire incorporated so many different ethnic and social groups into their collective, the levelof diversity which was exhibited within the societies of Latin America was one that was highly syncretic. Whereas it would be foolish to denote the fact that any one specific group was more superstitious and more conscious of superstition than was any other, it must be understood that the Spanish Empire was one that actively melded together from three distinct ethnic groups. Whereas the Anglo-American colonies intermarried sparsely with the native peoples, the Spanish Empire actively encouraged intermarriage and as a result of this, the distinct cultures that...
5 Pages(1250 words)Essay

...Ques. What lessons relevant to their own thinking about government did colonial Americans draw from history of Ancient Greece and Rome How were theselessons implemented Introduction -In this article we will provide an analysis of knowledge and understanding of individuals, groups, concepts, and developments, in colonization era of the United States. Colonial Americans drew heavily on the customs and traditions of ancient Greece and Rome to shape their own government and political system. Greece and Rome & Colonial America - The ancient Greeks lived in city-states, which were separate political units, and the administrative system was different in...
2 Pages(500 words)Essay

...Colonial America Order No: 200113 No: of pages: 2 Premium – 6530 “To contend for Liberty and to deny that blessing to others involves an inconsistency not to be excused.” (John Jay) These words are so true of the situation that prevailed in America during the time the slave codes were in force. During that period, a large number of colonists who happened to be slave owners had joined the battle for freedom. It was rather an irony to find that a nation who had the greatest number of slave owners should be so forceful about its own freedom. Most of the colonists realized the contradiction of their own actions but still went ahead and incorporated the same into their new strategy. The legal...
2 Pages(500 words)Essay

Research &Evaluation of a service Initiative

...Colonial America Colonial America The Women of the American Revolution is a book written by Ellet, Elizabeth Fries. The book was published by Baker and Scribner in New York. The book’s main subject is focused on women in the American Revolution. Elizabeth Ellet started to inspire scholars by writing her books, which enable them to recover and record the contribution and lives of women in various perspectives. Ellet published her work in a variety of genres making her one of the best known writers. Ellet did not follow the required roles of women and, therefore, was embroiled in public battles with prominent men, such as Edgar Poe and Rufus who referred to her as a troublemaker. The Women of the American Revolution is a book... America...
4 Pages(1000 words)Book Report/Review

Let us find you another Essay on topic Floating cities vs colonial America for FREE!