Comments (0)
Add to wishlistDelete from wishlist
Cite this document
Summary
Throughout history, Democracy and Totalitarianism have been hyped about. We need to realize whether Liberty and Democracy are separate from Totalitarianism or whether one leads to the other…
Download full paperFile format: .doc, available for editing
HIDE THIS PAPERGRAB THE BEST PAPER96.6% of users find it useful 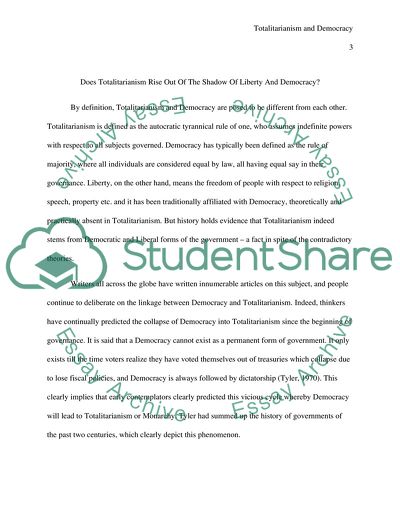 Running Head: Totalitarianism and Democracy Does Totalitarianism Rise Out Of The Shadow Of Liberty And Democracy? Abstract
The aim of this paper is to investigate two forms of government and their connection. Throughout history, Democracy and Totalitarianism have been hyped about. We need to realize whether Liberty and Democracy are separate from Totalitarianism or whether one leads to the other. There are common misconceptions about the two forms of government. All historical accounts are contrary to theoretical discussions about these governments. This paper attempts to clear out the misconceptions present regarding these governments, and their inter-relatedness.
Does Totalitarianism Rise Out Of The Shadow Of Liberty And Democracy?
By definition, Totalitarianism and Democracy are posed to be different from each other. Totalitarianism is defined as the autocratic tyrannical rule of one, who assumes indefinite powers with respect to all subjects governed. Democracy has typically been defined as the rule of majority, where all individuals are considered equal by law, all having equal say in their governance. Liberty, on the other hand, means the freedom of people with respect to religion, speech, property etc. and it has been traditionally affiliated with Democracy, theoretically and practically absent in Totalitarianism. But history holds evidence that Totalitarianism indeed stems from Democratic and Liberal forms of the government – a fact in spite of the contradictory theories.
Writers all across the globe have written innumerable articles on this subject, and people continue to deliberate on the linkage between Democracy and Totalitarianism. Indeed, thinkers have continually predicted the collapse of Democracy into Totalitarianism since the beginning of governance. It is said that a Democracy cannot exist as a permanent form of government. It only exists till the time voters realize they have voted themselves out of treasuries which collapse due to lose fiscal policies, and Democracy is always followed by dictatorship (Tyler, 1970). This clearly implies that early contemplators clearly predicted this vicious cycle whereby Democracy will lead to Totalitarianism or Monarchy. Tyler had summed up the history of governments of the past two centuries, which clearly depict this phenomenon.
Also, some people have recognized this cycle in slightly different way. Some believe the founders of government types knew how Liberty (0% government and 100% liberty) could span into Anarchy and consequently into Totalitarianism (100% government and 0% liberty). The cycle of democracy in this case is recognized as Democracy leading to Socialism, Socialism leading to Fascism, which in turn leads to Totalitarianism (Phillips). Several other philosophers have recognized this fact and tried to convey it to the masses. Furthermore, strong criticism of Democracy has also been conveyed by regarding the perception of voter’s self-rule as mere illusion. Voters relinquish their birth rights to property and freedom “… for a bowl of porridge.” (Phillips). This separates Liberty from Democracy, breaking the traditional linkage between the two.
Religious leaders have also realized this connection. Indeed, “a democracy without values easily turns into open or thinly disguised Totalitarianism.” (Paul, 1991). Pope John Paul evidently pointed towards the state’s continual attempts to invade religious liberty by constitutionalizing and deinstitutionalizing the religious affairs of the people. It nevertheless implies a significant linkage between Democracy and Totalitarianism.
Moreover, recent academics have also noted similarities between totalitarianism and democracy as “Both forms of Governments have the potential to oppress people. While Democracy typically does not follow this pattern, it is possible that a majority of people could empower a single party that would oppress the minority. This larger group can overtake and corrupt the system of equality. Once in power, the larger group can then disrupt the original system for one that would only allow it to stay in power.” (Bustamante, 2011). It is needless to mention that “… allow it to stay in power.” holds a clear hint about monarchy and totalitarianism.
To sum it all, people throughout the ages have recognized a link between Democracy and Totalitarianism. Though the theoretical definitions contradict this connection, practical implementation of democracy has often evolved into totalitarianism. The presence of Liberty in either case is sheer misconception on the behalf of the voters, bred into them by the governments.
References
Tyler, A. F. (1970). Cycle of Democracy. Retrieved from http://www.w3f.com/patriots/democracy.html
Phillips, G. The Hypocrisy of Democracy. Retrieved from http://www.w3f.com/patriots/democracy.html
Paul II John, P. (1991). Centesimus Annus. Retrieved from http://www.catholiceducation.org/articles/persecution/pch0065.html
Bustamante, J. (2011). Similarities between Totalitarianism and Democracy. Retrieved from http://www.ehow.com/info_8643931_similarities-between-totalitarianism-democracy.html Read More
Share:
Tags
Cite this document
(“Does totalitarianism rise out of the shadow of Liberty and Democracy Essay”, n.d.)
Does totalitarianism rise out of the shadow of Liberty and Democracy Essay. Retrieved from https://studentshare.org/history/1580356-does-totalitarianism-rise-out-of-the-shadow-of-liberty-and-democracy

“Does Totalitarianism Rise Out of the Shadow of Liberty and Democracy Essay”, n.d. https://studentshare.org/history/1580356-does-totalitarianism-rise-out-of-the-shadow-of-liberty-and-democracy.
Comments (0)
Click to create a comment or rate a document

...? Totalitarian rule may be defined as one which gives no space for competition in the political arena, whereby one individual uses all available means such as oppression, intimidation and denial of fundamental rights so as to maintain popularity and reduce criticism. In this context, it is observable that such governments are led by single party systems so as to make it easy to impose policies, some of which may be against popular understanding of democracy. However, it is important to point out that those who may try to oppose these policies in such an environment, despite how genuine they are, are faced with possibilities of being detained or being condemned for treason, a possible...
2 Pages(500 words)Essay

...the availability or inadequacy of economic power or hindrance by other parties of the individual from the same (Judt, 2011). Liberal is a label that can be respectable and displays less than it conceals. According to Tonny Judit, a liberal is someone who is not in agreement with interference of others affairs, one who tolerates attitudes that may be considered dissenting and unacceptable behavior. Historically, liberals have always been ambassadors, championing for individuals freedom to live freely and as they choose. Liberty does not exist on its own, but it is rooted in inspiring principles, which are interdependent. These principles are collectively referred, as democratic values that are the basis...
4 Pages(1000 words)Essay

...Does oil prevent Libya’s Democracy? Libya is the only country in Africa with significant oil reserves and ranked eighth globally. It is extremely desirable to explore oil in Libya due to the minimal production costs. Libya exports the majority of oil to the European markets. At times, one would ask if Oil hampers democracy in Libya. Democracy and oil have never made a potent mix (Arwa 16). Developing countries whose economy composes of oil lack a genuine democracy. Political analysts such as M. Ross and D. Hoffman made an extensive research on oil and democracy. They argued that oil is an impediment to democracy in...
4 Pages(1000 words)Research Paper

...instead it encourages class as it insists that no person is supposed to suffer for the sake of another such as compulsory taxation for funding social programs. Nozick thinks that United States’ political system does not respect the liberty of its citizens such as taxing the rich to help the poor in an effort to realize equality. He argues that no person should be deprived of his natural right of liberty for the sake of another. This argument cannot gain my support because it might work to increase the poverty gap, therefore, raising the level of poverty in the country. From Arendt’s ideology, we can conclude that ideologies of Mussolini, Lenin and Goldman were...
4 Pages(1000 words)Essay

...; they may be virtually impossible to reconcile in a coherent political theory, but they actually exist, in practice, on a daily basis in the real world. In other words, to say that positive liberty does not exist is to deny the innate inequalities and limitations of human beings - which will be assumed to exist in this paper - but on the other hand, to deny the existence of negative liberty is to deny the existence of social or political controls. So while it may be impossible to ground a political philosophy in some combination of these ideas - the importance of which Berlin convincingly points out - it is certainly possible that both ideas can be used as lenses through...
12 Pages(3000 words)Essay

...are taken to an entirely new level when threats and constant surveillance are sought to tend to citizens. People are frightened into living in ways that the majority of them want nothing to do with. With surveillance as constant as it could be, these people have very little chance of “acting out.” The most well-known examples of totalitarianism include Nazi Germany and Hitler, as well as the Soviet Union. These could also be considered dictatorships, though the principles were still the same: people were still being controlled, forced to live in ways that were often against their will. In both the cases of Nazi Germany and the Soviet Union, people were brutally punished – and in many cases, murdered –...
2 Pages(500 words)Essay

Out of the shadow refelction

...Out of the shadow reflection affiliation The film out of Shadow by Susan Smiley is a proactive and courageous one. Apart from schizophrenia, Mildred her mother is diagnosed to have been suffering from debilitating mental illness. The mental illness was diagnosed right before schizophrenia when she attempted to commit suicide and screaming or sleeping tendencies. The film has great significance through insightful and educational measures about frustrating schizophrenia. It also provides insight to the psychiatrist, case manager, social workers and families. More so it has been a critical tool used by advocacy organization such as NAMI and MHA to raise public awareness...
1 Pages(250 words)Essay

The Rise of Illiberal Democracy

...﻿The Article The article by Zakaria, “The Rise of Illiberal Democracy”, describes a very important political phenomenon in today’s world and recognizes clear differences between the political regimes of today. The article highlights the details and definitions of liberalism and illiberalism, liberal democracy and illiberal democracy, relates them to different examples, and explains each one in great detail. The author begins the article by quoting the words of American diplomat Richard Holbrooke, which he spoke at the time of the Bosnian election held in 1996; the author points out that the world is undergoing a phenomenon called illiberal...
7 Pages(1750 words)Term Paper
sponsored ads
Save Your Time for More Important Things
Let us write or edit the essay on your topic "Does totalitarianism rise out of the shadow of Liberty and Democracy" with a personal 20% discount.
GRAB THE BEST PAPER

Let us find you another Essay on topic Does totalitarianism rise out of the shadow of Liberty and Democracy for FREE!