Comments (0)
Add to wishlistDelete from wishlist
Cite this document
Summary
The author examines "The Annals" book in which Tacitus recounts the Rome history and different emperors and rulers of the empire. He plays special attention to the lives and personal feuds and dealings of these rulers, especially tracing the lineage in order to present the picture of Roman history. …
Download full paperFile format: .doc, available for editing
HIDE THIS PAPERGRAB THE BEST PAPER97.4% of users find it useful 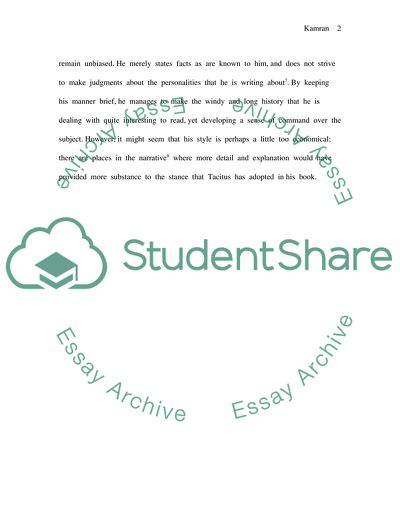 Extract of sample "Tacitus: The Annals"

Harris Kamran History Critical Analysis 14 September Tacitus: The Annals In the book, The Annals1, Tacitus recounts the history ofRome and the different emperors and rulers who reigned over the empire2. He plays special attention to the lives and personal feuds and dealings of these rulers, especially tracing the lineage and blood lines in order to better present the picture of the Roman history3. In Book V, he writes of Tiberius and the cold manner in which he acted after the death of his mother, whose blood line through marriages has been traced in his book with quite a lot of detail, including the interactions between Caesar and her, and Caesar’s impatient desire to bring her home4. He writes about Augustus and Fufius, and also narrates anecdotes from the life of Sejanus5. However, some of the text from this part of the book seems to be missing, and is catered to in the later editions of the book6.
Tacitus maintains a very detached and distant style of writing, and remains emotionally aloof of the various incidents that he is narrating. His style of writing is very succinct and precise, and he does not dwell into unnecessary details or emotional dramatics and theatrical phrases. It can be said that his syntax and diction gives his writing a sense of authenticity and grace, and so he manages to remain unbiased. He merely states facts as are known to him, and does not strive to make judgments about the personalities that he is writing about7. By keeping his manner brief, he manages to make the windy and long history that he is dealing with quite interesting to read, yet developing a sense of command over the subject. However, it might seem that his style is perhaps a little too economical; there are places in the narrative8 where more detail and explanation would have provided more substance to the stance that Tacitus has adopted in his book.
Endnotes
1. Daniel C. Stevenson, “The Annals: Book V,” MIT: The Internet Classics Archive, 1994, http://classics.mit.edu/Tacitus/annals.5.v.html
2. Ibid.
3. Ibid.
4. Ibid.
5. Ibid.
6. Ibid.
7. Ibid.
8. Ibid.
Bibliography
Stevenson, Daniel C. “The Annals: Book V.” MIT: The Internet Classics Archive.
1994. http://classics.mit.edu/Tacitus/annals.5.v.html. Read More
Share:
Tags
Cite this document
(“300 word essay, history of history 7 Essay Example | Topics and Well Written Essays - 250 words”, n.d.)
300 word essay, history of history 7 Essay Example | Topics and Well Written Essays - 250 words. Retrieved from https://studentshare.org/history/1580005-300-word-essay-history-of-history-7

CHECK THESE SAMPLES OF Tacitus: The Annals

Discourse with an Atheist Who Beleives That Gos Does Not Exist

Reasons for Christians' Persecution in the Roman Empire

...in leaps and bounds because the Romans felt immensely threatened by it. Widespread persecution resulted from these misconceptions and punishments and expulsions began to take place in 64 C.E. Nero is believed to be the very first Caesar to punish the Christians by inventing “charges of guilt”6 against them. In his ‘Annals’ Tacitus explains how Nero got many of the Christians arrested, mockery thrust upon them and then ordered them to be brutally killed. He also explains how they were “wrapped in the skins of wild animals, torn by dogs, nailed to the cross or even burnt alive to provide light at night, when the daylight had faded.”7 In fact, this was just the beginning of the Christian persecution by...
5 Pages(1250 words)Essay

...and perished, or were nailed to crosses, or were doomed to the flames and burnt, to serve as a nightly illumination, when daylight had expired. Nero offered his gardens for the spectacle, and was exhibiting a show in the circus, while he mingled with the people in the dress of a charioteer or stood aloft on a car.” (Tacitus, Annal xv. 44) Tacitus goes on to add, “Hence, even for criminals who deserved extreme and exemplary punishment, there arose a feeling of compassion; for it was not, as it seemed, for the public good, but to glut one man's cruelty, that they were being destroyed.” (Tacitus, Annal xv. 44) It is widely believed that St Peter who was...
6 Pages(1500 words)Essay

Drama Based on Nero's Life

...the kind of man that Nero had turned out to be (Tacitus 54). Nero under the counsel ship of other men led the people from the Promised Land back to a land filled with war, treasury, and murder. Nero did all this while seeking the advice of his advisers who in the fear of his wrath would always tell him what he had wished to hear. His love for women including the lust that he had for his mother show what kind of ruler that Nero had chosen to be (Tacitus 94). This paper has highlighted the life of Nero from a dramatic perspective and has put emphasis in the acts or scenes, which had the greatest impact on Nero or the people themselves. This paper tells of what kind of person Nero was before he became the...
8 Pages(2000 words)Term Paper

...of the real person Jesus. If indeed his life is a remarkable one, why then historians and other writers didn't take notice of his ministry Among the few relevant writing during the early second century, which showed hint of a historical Jesus as a person outside of the gospels, are the Tacitus Annals Book xv: AD 62-65 (Perseus Digital Library) and Josephus Antiquities XVIII.63-64, referred as Testimonium Flavianum, a non-Christian Jewish reference during the period. Tacitus mentioned about Christus, and his execution in Judea by order of Pontius Pilatus. But doubts whether Tacitus based this on independent information or just derived from what Christians were saying in...
19 Pages(4750 words)Essay

Tacitus on the pattern of Roman history

...'The Annals of Tacitus', as the well suggests, was a book which was written by an eminent d Tacitus. It was supposedly a tribute to the Roman history, with special significance to the four great emperors succeeding Caesar Augustus and described in detail the overall governance pattern of the Roman Empire. The historic details of the Roman Empire, with special reference to the Annals of Tacitus, were in reality the yearly details of the reign which were compiled after the death of Augustus. It is interesting to note that while the book was undoubtedly compiled by the author himself, the title 'Annals' was in fact advised or suggested by...
6 Pages(1500 words)Book Report/Review

An Outline History of the World

...fall is replete with references to slaves, predominantly from the perspective of the dominant community but interspersed with events that were the first instances of slave revolts which led to legendary epochs. Tacitus’ Annals presents a case of the city prefect Padanius Secundus’s murder by his slaves. The general sentiment regarding the case was to execute all the slaves who were employed in his house. There was a riot in which some members of the senate were concerned about the cruelty involved in such a decision, taking into account the fact that the slaves included many women and children who were ostensibly innocent. However, the strong arguments made by Gaius Cassius in support of the...
5 Pages(1250 words)Essay

The Roman History of Cassius Dio

...﻿The Roman History of Cassius Dio According to Tacitus, the revolt of Boudicca occurred in 61 A.D during the reign of Nero. The Roman Empire at the time consisted of various provinces and each province had its own form of government, usually a semi-autonomous system of government. However, it was clear the emperor's influence was vital for the stability of the provinces. Of the ancient historians and authors, Tacitus, Seutonius and Cassius Dio are the chief ancient authorities of the revolt of Boudicca and Nero. Tacitus mentions the revolt in "Agricola" and the "Annals", while Dio vividly described the violence and destruction in his book of Roman History. Seutonius and...
3 Pages(750 words)Essay

The Incorporation of Immigrants in Growing Urban Areas in Saudi Arabia (Style is Annals of the Associatio n of American Geographers , AAAG)

...The Incorporation of Immigrants in Growing Urban Areas in Saudi Arabia The World Fact Book. 10 April Middle East. Saudi Arabia. Available at https://www.cia.gov/library/publications/the-world-factbook/geos/sa.html (last accessed 8 May 2011). By design this source is meant to give not just detailed but also up to date information about countries. It covers major areas such as economy, population and religion. This aids in giving a comprehensive and conclusive argument. The website gives a statistical data on counties including Saudi Arabia; it states the population of both the natives and immigrants rating immigrants to an estimate of about 31 percent. It also shows the dominant religion as Islam to be up to 80 percent. It also... Incorporation...
4 Pages(1000 words)Annotated Bibliography

The Incorporation of Immigrants in Growing Urban Areas ( Style is Annals of the Associatio n of American Geographers , AAAG)

... into the Labour Market. Urban Studies. 46(3):583–603. Vlieger, A. 2012. Domestic Workers in Saudi Arabia and the Emirates: Trafficking Victims? International Migration. 50(6): 180-194. Wang, Q. 2010. How Does Geography Matter in the Ethnic Labor Market Segmentation Process? A Case Study of Chinese Immigrants in the San Francisco CMSA. Annals of the Association of American Geographers, 100(1):182–201. Zenou Y. 2011. Search, migration, and urban land use: The case of transportation policies. Journal of Development Economics 96 (2011):174–187.... Incorporation of Immigrants in Growing Urban Areas Department The Incorporation of Immigrants in Growing Urban Areas Every nation in the world experiences migration. It is estimated that about thre...
13 Pages(3250 words)Essay
sponsored ads
Save Your Time for More Important Things
Let us write or edit the essay on your topic "Tacitus: The Annals" with a personal 20% discount.
GRAB THE BEST PAPER

Let us find you another Essay on topic Tacitus: The Annals for FREE!