Comments (0)
Add to wishlistDelete from wishlist
Cite this document
Summary
In the following paper “Portrait of Pope Paul IV,” the author focuses on Renke’s book the History of the Papacy1, which has written quite fervently about Pope Paul IV and his inadvertent contributions towards the establishment of Protestantism…
Download full paperFile format: .doc, available for editing
HIDE THIS PAPERGRAB THE BEST PAPER93.2% of users find it useful 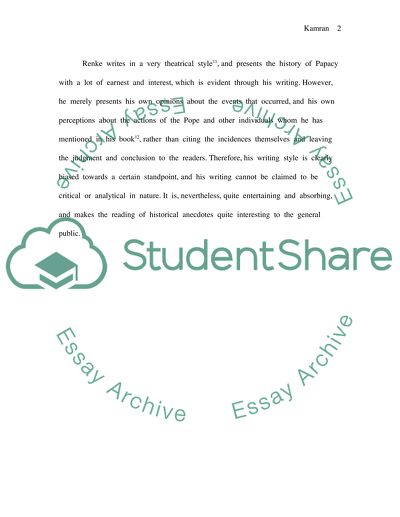 CHECK THESE SAMPLES OF Portrait of Pope Paul IV

...? Alexander Pope (1688 – 1744) is one of the best admired in the history of English literature. Unlike Shakespeare who was strictly a poet and a playwright, Pope balanced his writing with more formal notions drawn from educated circles. These were forces in his society, that were not open to him because he was a Catholic and considered an outsider. However, one of the more messages of Pope's criticism, is that literary genres are not fixed and static, rather, they intertwine and mix with others. Shakespeare might have been writing with 'tragedy' as a form, but his knowledge of Julius Ceasar, all of the King Henry's or King Richards, was unquestionably informed by the genre of history...
10 Pages(2500 words)Research Paper

Pope John Paul II and the Dogma of Mariology

...?Pope John Paul II and the Dogma of Mariology Pope John Paul II has not only adhered to the traditional dogma of Mariology, he has spearheaded its advancement and further definition for the Roman Catholic Church. Mariology is the religious veneration of Mary, the Biblical mother of Jesus Christ. Mariology stands on tenets such as the Immaculate Conception, the Assumption of Mary into Heaven, the mediation of Mary for mankind and her divinity1. Pope John Paul II through his encyclicals, public speeches and actions supported the theological belief of mariology as an essential and core belief of Catholicism. Since in the times of the early Catholic Church, church fathers have endorsed Mary's elevated status as mother of God. Standing... ...
8 Pages(2000 words)Essay

...some violence did occur in Poland, it was mostly sporadic in nature, and power passed out of Communist hands without the full-scale bloody revolution that had been predicted. This dissertation will consider the fall of communism from a number of viewpoints. While its ultimate crash occurred quite quickly, the stresses and strains that led to its demise had been building up for a number of years. From the economic woes that started to spread across the Communist bloc in the late 1970's onwards to the million person masses with the new Pope John Paul II in 1979 (Brittanica, 1991) to the renewed arms race created by President Reagan's policies, the Communist Bloc, and Poland in particular was pushed...
37 Pages(9250 words)Dissertation

Pope John Paul II, A man for others

...March 3, 2008 Pope John Paul II, "A man for others" Introduction: Pope John Paul II reigned as the 264th Pope of the Roman CatholicChurch and Sovereign of the State of the Vatican City from 16th October 1978, until his death, almost 27 years later, making his the second longest pontificate in modern times. He is the only Polish pope, and was the first non-Italian pope since the Dutch Adrian VI in the 1520s. He is one of only four people to have been named to the Time 100 for both the 20th century and for a year in the 21st. His early reign was marked by his opposition to communism, and he is often credited as one of the...
6 Pages(1500 words)Essay

...Portrait photography is also coined as portraiture. It is the duplication of a person's image through photography where facial expression holds dominance. During eighteenth century there was a demand for portraits which were less expensive, and this resulted in development of photography. It became so popular that in no time studios sprang up in cities around the world. Photography is both a method as well as an art. Portraiture came into being by the professional artist, Louis-Jacques-Mand Daguerre. His work focused laborious hours of work to produce portraits, landscapes, and still life. For this he sought a means by which he could generate his work easily through automated image...
32 Pages(8000 words)Coursework

...HITLER’S POPE Nazism remains one of the most controversial aspects of the world history. Throughout years, thousands of historians and scholars in military science sought to assess the contribution and effects of Nazism and personally Hitler to the development of anti-Semitism and nationalist trends around the globe. The relationship between Catholicism and Nazism was increasingly problematic: to blame religious leaders of being Nazis and anti-Semitists would mean to undermine the stability of the religious beliefs and trust in the context of public adherence to Catholic values and norms. John Cornwell made one of the first attempts to look deeper into the role which Catholic religious leaders played in the development...
7 Pages(1750 words)Essay

...warrant for him Died of fever at age 38 Sir Peter Paul Rubens Born June 1577, died 1640. A Flemish baroque painter who used sensuality, colour and movement to create emphasis. Is popular for creating landscapes, altarpieces and portraits regarded as allegorical and mythical. Had a large studio in Antwerp. Was knighted by several kings of England such as Phillip IV, and Charles I. Was introduced to art by Otto Van Veen and Adam Van Noort. Used to cop works of earlier artists such as Hans Holbein and Marcantino Raimondi. Gian Lorenzo Bernini Born in December 1598, died November 1680. Was a renowned Italian artist, sculptor, and architect operating from Rome. His baroque was...
5 Pages(1250 words)Assignment

...SELF PORTRAIT There are three episodes in my life, which always standout for me, whenever I think about them. The first of this is much related to mypersonal life, when after several years of dreaming, trying and hoping, I received my acceptance to travel to USA as a permanent resident in August 1997. This was considered to be an opportunity that I had really worked out for to deserve it. It was for the facts that I had put in personal efforts into this and the fact that it had been my childhood dream to travel to the USA that makes this episode stand out so significantly for me. What is more, I had my own future ambitions, which were focused on living a well learned lifestyle that made me financially independent and free...
2 Pages(500 words)Essay

...APOSTLE PAUL 4 Discussion question Paul’s religious experience on the road to Damascus According to Brown, Saint Paulviewed that the followers of Jesus Christ were portraying a lifestyle and believe that was contrary to the beliefs of the Pharisees to which he was ascribing to. Paul’s sudden encounter with the Lord Jesus is an indication that all was not finished at the cross and he admits that he had been personally sent to minister to the gentiles and to bring them to the knowledge of God (Brown, 427). Apostle Paul received a great revelation from Jesus Christ. His transformation was based on a personal encounter with the Lord Himself and this is also manifested when...
8 Pages(2000 words)Essay
sponsored ads
Save Your Time for More Important Things
Let us write or edit the book report/review on your topic "Portrait of Pope Paul IV" with a personal 20% discount.
GRAB THE BEST PAPER

Let us find you another Book Report/Review on topic Portrait of Pope Paul IV for FREE!