Comments (0)
Add to wishlistDelete from wishlist
Cite this document
Summary
Wilmot’s Proviso (1846) and the Kansas-Nebraska Act (1854) are believed to have contributed heavily to the Civil War. This paper contains a comparative analysis of these two causes and their…
Download full paperFile format: .doc, available for editing
HIDE THIS PAPERGRAB THE BEST PAPER96.1% of users find it useful 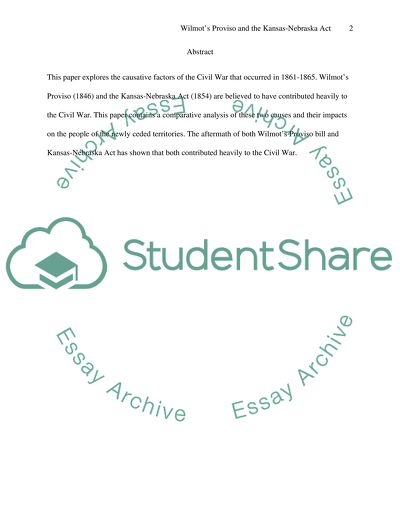 Extract of sample "Wilmot's Proviso and the Kansas-Nebraska Act"

“Wilmot'S Proviso and the Kansas-Nebraska Act Assignment”, n.d. https://studentshare.org/history/1579988-wilmots-proviso-and-the-kansas-nebraska-act.
Comments (0)
Click to create a comment or rate a document

CHECK THESE SAMPLES OF Wilmot's Proviso and the Kansas-Nebraska Act

...?Sur Comparison between the Transcript of Kansas-Nebraska Act (1854) and the Transcript of Missouri Compromise (1820) The Transcript of Kansas-Nebraska Act (1854) was initiated to organize the territories of Nebraska and Kansas. This was enacted by the House of Representatives and the senate of U.S.A in the assembled congress. The areas that are exempted from this act include the Missouri River, the east Utah territory boundary, the Rocky Mountains summit; the Missouri River on the southward boundary, Nebraska Territory created temporary government, the Minnesota territory on the western boundary. The act provided that not anything entailed in this in it shall be interpreted to hamper the United States government from partitioning... of an...
5 Pages(1250 words)Research Paper

...Water Fluoridation Issue in Kansas Introduction Kansas is a in Midwestern America that is home to over two million people and has four major metropolitan areas. The areas are Wichita, Topeka, the Kansa City area, and Overland Park with the population in these areas creating immense water challenges for the area. The Kansas area is a leading producer of cattle and agricultural produce such as soybeans and corn (Mortal et al 1). The area relies on rivers, wetlands, and underground rivers as the natural water sources and the water supply is both private and public. Kansas is ideal for agriculture because a significant percentage of its land can support...
3 Pages(750 words)Essay

...it remains valid. The Court drew upon the reverse onus provision as provided for in the Misuse of Drugs Act, as imputing an evidential burden on the defendant rather than the prosecution. The case of Re S (Children: care plan)20 is an important one because it established that statutory interpretation in compatibility with Convention Rights will not be possible, if it implies a conflict with existing statutes. In this case, the statute under consideration was the Children Act and the Court of Appeal had formulated a new procedure in requiring local authorities to notify the Court and the child’s guardian if certain developments did not occur. However in this instance, Lord Nicoll...
12 Pages(3000 words)Essay

...The Palace on Gladstone Boulevard Introduction The Kansas Museum, also sometimes referred to as the Palace on Gladstone Boulevard, opened in 1940 and is the city’s regional and local earliest and most significant museum. It is located at the previous property of Robert Long, a civic leader and lumber businessperson. The location is adjacent to Cliff Drive and Kessler Park and has a view over Missouri River Valley. Originally, the museum has six structures. Currently, there are five remaining structures from the original six, which includes the Museum Visitor Center, the StoryTatium located at what was formerly the Conservatory, the Carriage House where the previous owner’s daughter Loula Long Combs displayed her trophies...
6 Pages(1500 words)Research Paper

What was Wilmot proviso and why was it significant

...Wilmot Proviso and why was it significant In 1846, this bill was amendment before the United s House of representatives during the Mexican War. The bill stated “that as an express and fundamental condition to acquisition of any territory in the Republic of Mexico…neither slavery nor involuntary servitude shall ever exist in any part of the said territory” . Despite having the majority votes in the house Wilmot Proviso failed at the senate level due to more Southerners who were against the amendment. Wilmot Proviso brought conflict among the between North America and Southerners who wanted to bring in the slaves they had...
1 Pages(250 words)Essay

...Effectiveness and Ineffectiveness of “Compromise of 1850” and “Kansas-Nebraska Act” The Compromise of 1950 was a package of four bills that only provided temporary settlement to cut the ongoing slavery conflicts among territories. First Texas and Mexico provision, which admitted New Mexico as a territory without slavery ban. It was all again dependent on the “popular sovereignty.” As well as to resolve the territorial boundary between Texas and New Mexico; for this provision, the United States paid Texas Republic $10 million to surrender its all territories to the federal government. Second was the Utah provision which also acknowledged Utah as a federal state that had the same...
2 Pages(500 words)Essay

...Erickson`s stages of Development in “Nebraska” by Alexander Payne by Erick Erikson retransformed the views on human psychological development by his works. He concentrated his efforts on creating the model of personality evolution. According to Erikson, each personality passes eight stages of development, each of which is characterized by certain crisis or conflict (Carducci, 2009). Resolving this conflict a person acquires new virtues necessary for personality formation and is able to pass to the next stage. Erikson considered that psychological development continued throughout the whole life span, and emphasized the necessity of adults` transformation as well (Aiken, 1998). After a child passes...
4 Pages(1000 words)Essay

...Charlatans’ cranks and Kansas The governor of the Kansas Sam Brown came up with a proposal to slash large tax bypercentages. He did it without paying attention to the source of the lost revenues which could have been brought in by the taxes. This has had a great impact on the economy of Kansas leaving it lagging behind of the neighboring states and the country as a whole. In fact, the country is having deficits in its national budget. The cut of taxes has downplayed the economy of Kansas as it was predicted. This can be a lesson for other states with the power of bad ideas that serve the right people who are protected by the laws. The idea was deemed to fail owing to the...
1 Pages(250 words)Article

... The Harpers Ferry raid critically impacted the future of the abolition. It had once been subjugated by pacifist politics, but subsequent to October of 1859, determination and anger fused into a new militancy position that demanded an end to slavery. It was by any possible means, many felt violence as the necessities. John Brown left a significant mark on the South. The great Southern dread of a slave revolt was worsened by Browns try at Harpers Ferry. Subsequent to the raid, the Governor of Virginia, Henry A. Wise received numerous letters as well as telegrams alleging that bands of men were attacking the South (Tony 45). Doubtful people were imprisoned or driven out of town, books majoring on the South were openly burned... The Harpers...
1 Pages(250 words)Assignment
sponsored ads
Save Your Time for More Important Things
Let us write or edit the assignment on your topic "Wilmot's Proviso and the Kansas-Nebraska Act" with a personal 20% discount.
GRAB THE BEST PAPER

Let us find you another Assignment on topic Wilmot's Proviso and the Kansas-Nebraska Act for FREE!