Should the united states pull out of afghanistan - Essay Example

Comments (0)
Add to wishlistDelete from wishlist
Cite this document
Summary
If we go by the public opinion, then yes the US should pull out of Afghanistan. Overwhelming majority of Americans up to 70 percent opposes our troops being stationed in Afghanistan, Andrew J Belvich argues for the troops…
Download full paperFile format: .doc, available for editing
HIDE THIS PAPERGRAB THE BEST PAPER92.8% of users find it useful 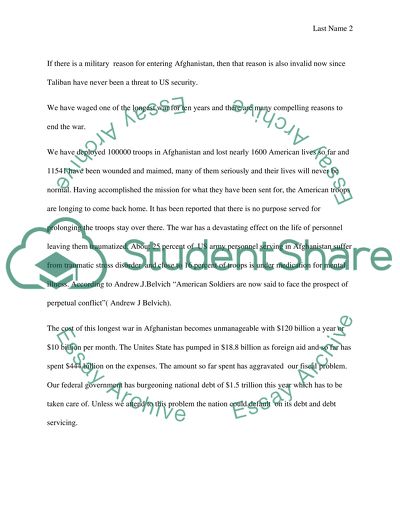 Extract of sample "Should the united states pull out of afghanistan"

Should the United s Pullout of Afghanistan? Should the United s pull out of Afghanistan? If wego by the public opinion, then yes the US should pull out of Afghanistan. Overwhelming majority of Americans up to 70 percent opposes our troops being stationed in Afghanistan, Andrew J Belvich argues for the troops withdrawal in his Testimony before the Senate Foreign Relations Committee of US Congress (McKenna)
What was all this war about? Why in the first instance we are embroiled in this war. It all began in September 2001 when US Senate voted for use of force against the terrorists who perpetrated the attacks on Pentagon and on Twin Towers. The initial dispatch of troops to Afghanistan was to either capture or kill Osama bin Laden who was the master mind behind the attack and to decimate his network Al Qaeda. If this is the principal reason for the war, now that Osama bin Laden is dead and the Al Qaeda decimated to only 50 members in Afghanistan, is it not time to pull out of Afghanistan.
If the reason for our continuing presence in Afghanistan is based on the lofty ideals of nation building of that strife torn country and install democracy, then it cannot be achieved since Afghanistan itself is against that concept and western type of democracy is a fallacy there.
If there is a military reason for entering Afghanistan, then that reason is also invalid now since Taliban have never been a threat to US security.
We have waged one of the longest war for ten years and there are many compelling reasons to end the war.
We have deployed 100000 troops in Afghanistan and lost nearly 1600 American lives so far and 11541 have been wounded and maimed, many of them seriously and their lives will never be normal. Having accomplished the mission for what they have been sent for, the American troops are longing to come back home. It has been reported that there is no purpose served for prolonging the troops stay over there. The war has a devastating effect on the life of personnel leaving them traumatized. About 25 percent of US army personnel serving in Afghanistan suffer from traumatic stress disorder and close to 16 percent of troops is under medication for mental illness. According to Andrew.J.Belvich “American Soldiers are now said to face the prospect of perpetual conflict”( Andrew J Belvich).
The cost of this longest war in Afghanistan becomes unmanageable with $120 billion a year or $10 billion per month. The Unites State has pumped in $18.8 billion as foreign aid and so far has spent $444 billion on the expenses. The amount so far spent has aggravated our fiscal problem. Our federal government has burgeoning national debt of $1.5 trillion this year which has to be taken care of. Unless we attend to this problem the nation could default on its debt and debt servicing.
If we pull out from Afghanistan, we can free our resources, which is being spent on this unnecessary war. These resources can be used for growth, increasing the productivity and raising the living standards of our citizens.
This war was fought an imagined threat to our security and still we are waging the war in an unknown soil, and for an un co-operative country, which is incapable of maintaining its security.
This is a “mystical war on terrorism. Mystification breeds misunderstanding and misjudgment . It prevents us from seeing things as they are “( Andrew J. Belvich )
Should we continue the war, should we allow our personnel to languish in a hostile country, which is not showing up even a single sign of recovery from its plaguing problems, should we squander our money when our own people are struggling to meet both ends, the answer is an emphatic no. But should the United States pull out of Afghanistan. Yes, immediately, right now, for the reason mentioned in the article.
Reference
McKenna, George, Feingold, Stanley(2011) Taking Sides Clashing Views on Political Issues, Issue no 21, 17th edition Mc Graw Hill, Print. Read More
Share:
Tags
Cite this document
(“Should the united states pull out of afghanistan Essay”, n.d.)
Should the united states pull out of afghanistan Essay. Retrieved from https://studentshare.org/history/1578914-should-the-united-states-pull-out-of-afghanistan

“Should the United States Pull Out of Afghanistan Essay”, n.d. https://studentshare.org/history/1578914-should-the-united-states-pull-out-of-afghanistan.
Comments (0)
Click to create a comment or rate a document

Gender Differences and Similarities between the United States and Afghanistan

...? Gender Differences and Similarities between the United s and Afghanistan Gender Differences and Similarities between the United States and Afghanistan Introduction In every society, there exist gender differences and similarities that are based on the men and the women roles in the society. In some nations like the US, the gender roles have greatly changed over time, unlike in the Afghanistan where the traditional status of society still continue to prevail despite the oppression of one gender against the other. The gender differences are evident in the work place roles, family roles, income, among many others. The society in the US has undergone great transformation overtime while that of Afghanistan has resisted the forces... of...
11 Pages(2750 words)Term Paper

...diligent pursuit, the raiders succeeded in escaping the area along with the loaded ammunition. The Marine casualties included 16 wounded and 05 killed. (Yingling, 41). The 5th Marines were entitled to China Service streamer. By mid-May, the remaining units of the 1st Division had been withdrawn from China. Most of them were sent back to the United States. However, along with some other supporting units, the 5th Marines was moved to Guam, where it filled in the organization of 1st Provisional Marine Brigade on June 01, under the command of Brig. Gen. Edward A. Craig. The 2nd Battalion was also removed in October to form the 9th Marines. For the rest of the period at Guam,...
20 Pages(5000 words)Research Paper

We Should Pull Our Troops from Afghanistan

..., religious and political scenario that laid in Afghanistan, one can see that the country has been rapidly destabilizing. Western efforts to establish a stable government began to show some signs of failure and the administrative reforms are nonsufficient because of growing conflicts. Therefore, the special circumstances that exist in Afghanistan forced the Western authorities to pull their troops from Afghanistan. Joint military force of the United States and Western countries invaded Afghanistan to stop it from offering weapons and money for various terrorist groups. Amitai Etzion reports that through the assassination...
2 Pages(500 words)Research Paper

Pull our troops from Afghanistan

...that the other important leaders of Al Qaeda are not captured and killed remains as it is. And Osama bin Laden was also killed in Pakistan not in Afghanistan that means for the elimination of Al Qaeda, Afghanistan is not of that importance as it was in the past because the Al Qaeda leadership can be considered to be moved to other countries like Pakistan, Bangladesh, Malaysia, and Central Asian Muslim states or to some of the Arab countries (Hamilton). But the movement of Al Qaeda leadership to other countries took place because of the presence of the US forces in Afghanistan and if the troops are pulled out, a destabilized and weak...
9 Pages(2250 words)Research Paper

...their rights and limited the processes of governance within the minority Taliban rule (Finkel, 2009). In essence, the application of idealism in the case of Afghanistan entails the restructuring of the old order with the objective of creating a new government and a new society founded on the principles that are consistent with democracy and human rights. Ultimately, the differences between idealism and realism should be seen as more complimentary than antagonistic. The United States has often been criticized for having supported the Iraqi and Egyptian regimes under Saddam Hussein and Hosni Mubarak respectively (Hudson, 1996). Focusing on the regime of Hosni Mubarak, the...
6 Pages(1500 words)Research Paper

How soon should the US pull out of Afghanistan

...Topic: Policy Paper: How soon should the US pull out of Afghanistan America's pledge in Afghanistan is primarily a question of responsibility the United States must take for the chaos that was bear out of years of negligence and under-resourcing for the period of the Bush period. In light of all we know regarding Afghanistan after nearly eight years, it shows solid ground for President Obama to direct the United States to pull out of Afghanistan is because the public is exhausted of war. Decision...
6 Pages(1500 words)Essay

...to continue into 2009. The government's lending operation according to others will prevent mortgage companies from collapsing but will not in any way solve fundamental problems that face the housing sector. The United States' government bail out of banks has been an issue of great controversy. It is an issue that has received much attention in the media with strong opinions being voiced in its favour from some quarters and against it in other quarters. Given that different groups and individuals have different views regarding this program, it is necessary that an analysis should be performed using a representative sample to accurately determine the general attitude of...
8 Pages(2000 words)Case Study

...﻿United States Vs. Afghanistan Introduction It is commonly believed that prisoners in US have rights. These rights were awarded to them by the criminal justice system of the US, but these rights are not provided without efforts made by those stakeholders who are being affected by prisons of US. The policy makers of Bill of Rights state that prisoners have been given rights without any demands and protests, reality is that people had to suffer a great deal to obtain these rights. Even when rights were given after several years of protests, attempts were made to abolish them through new rules and regulations. For example, after 9/11 President of the United...
9 Pages(2250 words)Research Paper

The United States' Invasion of Afghanistan

...it is a sovereign nation. Machiavelli’s theory on moral tradition condemns immoral practices that States use to maintain power. The theory advocates for diplomacy because morality is the basis of constituting governments. Based on a realist perspective, the US was not strategic when invading Afghanistan making their invasion qualify as intimidation as noted by Fiscus (1969). The US did not adhere to the principles of diplomacy that Machiavelli advocated for in his literary works. Instead, they focus on Machiavellism while carrying out their mission. Machiavelli believed that morals should guide nations in their pursuit. Therefore, it was unethical for the...
1 Pages(250 words)Assignment
sponsored ads
Save Your Time for More Important Things
Let us write or edit the essay on your topic "Should the united states pull out of afghanistan" with a personal 20% discount.
GRAB THE BEST PAPER

Let us find you another Essay on topic Should the united states pull out of afghanistan for FREE!