Comments (0)
Add to wishlistDelete from wishlist
Cite this document
Summary
Viewing with deep concern the humanitarian situation that is characteristic of the current state of affairs in the Gaza Strip, which leads to a potential decrease in the standards of living and the security situation of the majority of the area’s population,
Referring to the…
Download full paperFile format: .doc, available for editing
HIDE THIS PAPERGRAB THE BEST PAPER93.3% of users find it useful 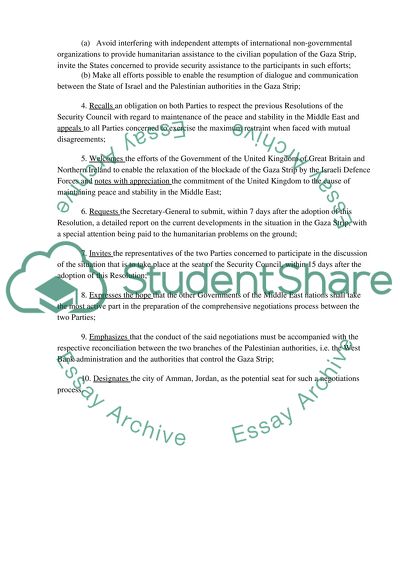 Resolution: Committee: Security Council Topic Area: Israel Submitted by: Nigeria The Security Council, Viewing with deep concern the humanitarian situation that is characteristic of the current state of affairs in the Gaza Strip, which leads to a potential decrease in the standards of living and the security situation of the majority of the area’s population,
Referring to the previous incidents and tensions between the State of Israel and the Palestinian authorities in the Gaza Strip that were caused by the increasing misunderstanding and attempts of both Parties to act unilaterally,
Bearing in mind the previous reports and findings of the United Nations Human Rights Council of 24 January 2008 and of the United Nations Office for the Coordination of Humanitarian Affairs of 25 May 2010, as well as the statements conveyed by the United Nations Special Rapporteurs present in the Gaza Strip,
Aware of the situation in the Gaza Strip, which leads to intolerable limitations of freedom of movement and of commerce between the population of the Gaza Strip and the surrounding communities,
Deeply conscious of the responsibility of the global community for the maintenance of peace and security in the Middle East, as well as globally,
Fully alarmed that the continuation of the present crisis in the relations between the State of Israel and the Palestinian authorities in the Gaza Strip may undermine the peace process and lead to significant challenges to the regional stability,
1. Calls upon the two Parties concerned to exert all efforts necessary to resolve their differences and to make full use of the instruments of pacific settlement of disputes provided for in Chapter VI of the Charter of the United Nations. Such a settlement shall be conducted under the procedural rules the two Parties find the most beneficial to their common interests, and shall be supervised by the special Commission of the Security Council of the United Nations;
2. Condemns the unjustifiable acts of violence committed by the armed forces of the State of Israel and the paramilitary formations of the Palestinian authorities in the Gaza Strip against the civilians residing both in Israel and Palestine and calls for the objective arraignment of all the persons involved in them;
3. Decides, with a reference to the paragraphs 4 and 6 of this resolution that all States shall:
(a) Avoid interfering with independent attempts of international non-governmental organizations to provide humanitarian assistance to the civilian population of the Gaza Strip, invite the States concerned to provide security assistance to the participants in such efforts;
(b) Make all efforts possible to enable the resumption of dialogue and communication between the State of Israel and the Palestinian authorities in the Gaza Strip;
4. Recalls an obligation on both Parties to respect the previous Resolutions of the Security Council with regard to maintenance of the peace and stability in the Middle East and appeals to all Parties concerned to exercise the maximum restraint when faced with mutual disagreements;
5. Welcomes the efforts of the Government of the United Kingdom of Great Britain and Northern Ireland to enable the relaxation of the blockade of the Gaza Strip by the Israeli Defence Forces and notes with appreciation the commitment of the United Kingdom to the cause of maintaining peace and stability in the Middle East;
6. Requests the Secretary-General to submit, within 7 days after the adoption of this Resolution, a detailed report on the current developments in the situation in the Gaza Strip, with a special attention being paid to the humanitarian problems on the ground;
7. Invites the representatives of the two Parties concerned to participate in the discussion of the situation that is to take place at the seat of the Security Council, within 15 days after the adoption of this Resolution;
8. Expresses the hope that the other Governments of the Middle East nations shall take the most active part in the preparation of the comprehensive negotiations process between the two Parties;
9. Emphasizes that the conduct of the said negotiations must be accompanied with the respective reconciliation between the two branches of the Palestinian authorities, i.e. the West Bank administration and the authorities that control the Gaza Strip;
10. Designates the city of Amman, Jordan, as the potential seat for such a negotiations process. Read More
Share:
Tags
Cite this document
(“UN Resolution on Israel (assigned Country is Nigeria) 1.15 single Essay”, n.d.)
Retrieved from https://studentshare.org/history/1578493-un-resolution-on-israel-assigned-country-is-nigeria-115-single-spacings

...?SCHOOL SCRIPTURE INTERPRETATION AND MEDITATION OF JOHN 15 11 A SCRIPTURE INTERPRETATION AND MEDITATION PAPER SUBMITTED TO DEPARTMENT BY FULL NAME CITY, STATE DATE John 15:1-111 is a part of the whole book of John which is a gospel, meaning the ‘good news’. It is called so because the book tells about the saving grace of God through His son, Jesus Christ which is considered the good news. Gospels contain the story of Jesus’ life and what he has done to save the people from their sins as the Son of God. His stories are usually told as stories in the form of parables which give instructions to how Jesus’ followers should live. During the time of Jesus, the Israelites were religiously...
2 Pages(500 words)Essay

Levels of AnalysisCh. 3 & Arab-Israeli Conflict book & homework. My assigned Country for this research is NIGERIA

...? The Arab-Israeli Conflict: Issue and Country Summary (Nigeria) First of the 5 events that the researcher thinks is important in understanding the nature of the Arab-Israeli Conflict is the Collapse of the Ottoman Empire. Palestine, which was formerly a part of the predominantly Islamic Ottoman Empire, was given to Britain as a mandate by the League of Nations (Schulze 5). This event gave the opportunity for Jews to settle in this predominantly Islamic territory, despite opposition from the Palestinians who have already occupied the land since the time of the Crusades. Another important event is the publishing of the works of Leo Pinsker (Auto-emancipation) and Theodor Herzl (Der Judenstaat) which called...
2 Pages(500 words)Assignment

...achieve independence through nonviolence than they can defend the country by nonviolence and it can move in a proper system through self-government. For Gandhi there can be absolute truth and the conditional truth which is actually dependent on absolute truth. Absolute truth is ultimate and fixed for Gandhi and is a fundamental truth that can’t be changed. Gandhi also equates God and love with truth and this is integral part of his philosophy. Ahimsa and Truth are two integral parts of his philosophy and he compares them with two lungs as to show the importance of these concepts. Truth is the ultimate goal but it can’t be achieved unless one acts upon the principle of Ahimsa. Ahimsa is not only important for seeking...
7 Pages(1750 words)Research Paper

...rights. To solve this problem, it is very important to show the ground realities to the world. The biggest hurdle in the process of establishing a fact of right or wrong is the biased media. Most of the so called ‘independent media’ is working underhand for different lobbies. Talk shows and reports are sponsored and they come up with a set perspective and mission what to show to the outside world. A special UN commission with representatives from all the countries should visit the area and make divide the countries as per population needs. Though, this idea does not seem to be implemented since many stakes are involved in the conflict ranging from Federal Reserve bank, media and Zionism...
3 Pages(750 words)Essay

The UN Security Council: an analysis of its resolution effectiveness

...The UN Security Council: An Analysis of its Resolution Effectiveness The United Nation was created on October 24, 1945 with originally 50 member countries and has grown to 185 members to date ("United Nation Charter", Historical Documents). This organization of nation's primary aim is "To maintain international peace and security, and to that end: to take effective collective measures for the prevention and removal of threats to the peace, and for the suppression of acts of aggression or other breaches of the peace, and to bring about by peaceful means, and in conformity with the principles of justice and international law ()" ( UN Charter, Chapter...
8 Pages(2000 words)Essay

.... Furthermore, HVAC systems should be well-maintained in order to enhance air quality. Lastly, air cleaners should be utilized with these systems in order to facilitate the process of removing toxins. Dirt, debris, and microbiological growths continue to pose as a serious threat to all individuals. Hence, in order to reduce the growth of these harmful elements, certain steps must be taken. These steps consist of utilizing, well-maintained filter systems, using filters rated at MERV 6 or greater, regular HVAC maintenance, providing good housekeeping in the occupied space, locating air intakes in non-contaminated locations, and keeping all HVAC system components clean. Undoubtedly, OSHA has been trying to develop IAQ...
2 Pages(500 words)Coursework

...of Passage Ezekiel 15: 1-“Then the word of the Lord came to me, saying”( New King James Version, Ezekiel 15.1). This particular verse is merely used to introduce the passage as a whole. It would be considered a Prophetic Introduction which is often used when beginning direct words from God. Readers are able to see that the following words are coming from the Lord or God which increases its meaning and importance exponentially. Ezekiel 15: 2-“Son of man, how is the wood of the vine better than any other wood , the vine branch which is among the trees of the forest?” (New King James Version, Ezekiel 15.2). Readers are meant to infer that the vine referred to in this verse symbolizes...
2 Pages(500 words)Research Paper

Discuss the impact of globalisation on an African country. (Nigeria)

...Country Study: Israel This study focuses on analyzing the business, social and economic environment of Israel. The country’s profound demographic, political and social transformation is strengthening the U.S-Israeli ties and other international relations. Over the past decades, The Israeli economy has grown strong and stable, and the country has managed to endure through some of the worst global financial and economic crisis while promoting economic growth. Country background Israel has been the home for most of the Jewish immigrants in the world since its independence in 1948. It has a population comprised of...
8 Pages(2000 words)Research Paper
sponsored ads
Save Your Time for More Important Things
Let us write or edit the essay on your topic "UN Resolution on Israel (assigned Country is Nigeria) 1.15 single spacings" with a personal 20% discount.
GRAB THE BEST PAPER

Let us find you another Essay on topic UN Resolution on Israel (assigned Country is Nigeria) 1.15 single spacings for FREE!