Comments (0)
Add to wishlistDelete from wishlist
Cite this document
Summary
The paper contains the reforms made by Frederick the Great of Prussia and reforms made by Emperor Joseph II of Austria which were set about building a rationalized, centralized, and uniform government for his diverse lands. The personnel was recruited without any discrimination of class.  …
Download full paperFile format: .doc, available for editing
HIDE THIS PAPERGRAB THE BEST PAPER94% of users find it useful 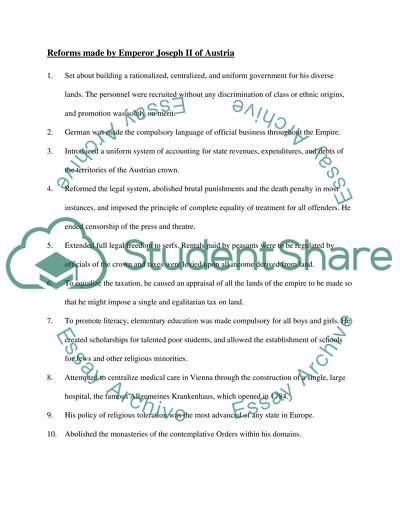 2. Revamped system of indirect taxes, which brought more revenue to the state than direct taxes.
3. Stabilized the rates of depreciated coins. The depreciation occurred as a result of the 7-year war and the gaining of Silesia.
4. Continued the work of his predecessors to consolidate power by giving the territorial princes a place in the governmental bureaucracy.
5. Established universal religious toleration and granted freedom of the press.
6. Ensured individual protections by means of accelerating the legal process, eradicating torture, and legalizing death sentence only with his prior approval.
7. Introduced the first German law code and enforced general education rules across Prussia.
8. Financed reconstruction of towns through agricultural reforms and built thousands of miles of roads.
9. Judges were educated and the courts gained a reputation as the most honest in Europe.
10. Built Prussia as one of the strongest nations in Europe and left a tendency of focusing on the fatherland only that continued to shape German history into the 20th century.
Reforms made by Emperor Joseph II of Austria
2. German was made the compulsory language of official business throughout the Empire.
3. Introduced a uniform system of accounting for state revenues, expenditures, and debts of the territories of the Austrian crown.
4. Reformed the legal system, abolished brutal punishments and the death penalty in most instances and imposed the principle of complete equality of treatment for all offenders. He ended censorship of the press and theatre.
5. Extended full legal freedom to serfs. Rentals paid by peasants were to be regulated by officials of the crown and taxes were levied upon all income derived from land.
6. To equalize the taxation, he caused an appraisal of all the lands of the empire to be made so that he might impose a single and egalitarian tax on land.
7. To promote literacy, elementary education was made compulsory for all boys and girls. He created scholarships for talented poor students and allowed the establishment of schools for Jews and other religious minorities.
8. Attempted to centralize medical care in Vienna through the construction of a single, large hospital, the famous Allgemeines Krankenhaus, which opened in 1784.
9. His policy of religious toleration was the most advanced of any state in Europe.
10. Abolished the monasteries of the contemplative Orders within his domains.  Read More
Share:
Tags
Cite this document
(Reforms by Frederick the Great of Prussia and by Emperor Joseph II of Assignment, n.d.)
Reforms by Frederick the Great of Prussia and by Emperor Joseph II of Assignment. Retrieved from https://studentshare.org/history/1576583-german-history-class

“Reforms by Frederick the Great of Prussia and by Emperor Joseph II of Assignment”, n.d. https://studentshare.org/history/1576583-german-history-class.
Comments (0)
Click to create a comment or rate a document

Constantine I The Great Emperor

...? of the of the Constantine The Great – Emperor Constantine I Constantine is considered one of the most influential emperors in the roman history. He was the first Roman emperor to adopt Christianity and empower it throughout his empire. He was a great general who led many battles against numerous settlements and formed an empire that extended across vast borders. Constantine the Great was born on 27th February in the city of Serbia which was known as Moesia at that time. The year of his birth is not exactly known but it is believed by the historians to be near 272 (Biographiq). Constantine was the son of Flavius and Helena but it is...
7 Pages(1750 words)Essay

...? How far the reforms introduced by the last labour government enhance or detract from the rule of law, democratic accountability or the sovereignty of parliament in the U.K. The last few years has seen United Kingdom undergoing a series of insightful constitutional changes. During the tenure of the Labour Party from 1997-2010, many constitutional reforms were introduced in UK. One criticism that has been bought against the Labour party’s reform agenda is that it was not well-synchronized and there were no definite set of guiding principles behind it but it is already clear, going by the impact of this change over the last decade that the British democracy has changed for good. The...
6 Pages(1500 words)Essay

The Reforms of Peter the Great

...October 17h Reforms of Peter the Great Peter the great was born on June 9, 1672 in Moscow and was the 14th child of Czar, he ascended to power jointly with his half-brother, Ivan, but since they were underage, they had Regent Sophia their sister who literally ran the country, as she wished through them. However, at age seventeen he took over power, sent her to a convert and forced her to become a nun; thus, relinquishing her loyal titles, with Ivans death, he became the sole ruler of Russia. Peter the Great is accredited with pulling Russia out of the mediaeval period with so much success that, by the time he died in 1725, Russia had become one of the leading states in...
4 Pages(1000 words)Essay

...work, non-violence with the whites, and strong leadership. He went on to urge the Blacks to try and earn their rightful place as being equal to the whites through having self-respect and moral standards that are of high value. Frederick the Great Frederick was a Prussian king in the 18th century and one of his famous accomplishments was the elevation of Prussia from a smaller power on an equal footing with other states such as Bohemia and Saxony making them great states with a lot of power and politics, the state joined with others which include France, Russia, Austria, among Poland and Britain; Prussia later became a...
4 Pages(1000 words)Assignment

..., stretched from 246 to 210 B.C. To be fair, it should be noted the Emperor is recorded to be quite a tyrannical figure in Chinese history. This was likely necessitated by the fact, however, that he had to struggle to keep the country unified during this initial stage of China being governed by an Emperor, particularly during the first part of his reign. It was a paradox of sorts, as this 35 year rule of power by the Emperor saw both great advances in cultural and intellectual pursuits, yet also resulted in great amounts of destruction throughout the land (Donn & Donn 2003). Perhaps owing to this reason, there are different schools of thought when...
10 Pages(2500 words)Essay

...Vienna, Austria Vienna is the capital of Austria and also one of the nine s of Austria. The population of Vienna is 6 million (2.2 million within the metro area). Vienna is the largest city of Austria as well as its cultural, economic and political center. The city lies on both sides of the River Danube, and only 60 kilometers off Austria's Eastern border. Vienna lies in the South East corner of Central Europe and is close to the Czech Republic, Slovakia and Hungary (Vienna, 1) The Wienerwald (Vienna Woods) and the foothills of the Eastern Alps begin shortly after the western suburbs of Vienna (Austria, 1). The city was the capital of the...
3 Pages(750 words)Essay

...Introduction Out of all figures within military history, Frederick II proves to be most fascinating since he was not only a military leader but also a soldier, strategist, statesman, musician, philosopher, and poet. Frederick II (the great), King of Prussia was a successful military leader and domestic reformer. Alexander II was able to hold off armies of Russia, Austria, and France supported by his superior manoeuvring, skill, and timing during the Seven Years War, (1756-1763. Frederick II was King of Prussia (1740-1786) of the...
12 Pages(3000 words)Research Paper

... Vienna Austria Specific Purpose: This speech provides valuable information to help my audience enjoy the of Vienna Organizational Pattern: Topical Intended Audience: Introduction I. Attention Getting Device: Everybody hates getting lost especially while on a trip to an unknown place. Lack of knowledge about a place can make people make wrong choices about where to stay and what to wear to suit the weather of the place. People need to know the beautiful sceneries of a place to make their trip there enjoyable and fulfilling (Steves 34). Through this speech, we take an exciting trip to Vienna. II. Orientation Phase: A. Point: This speech seeks to provide information valuable to anybody visiting Vienna. B. Adaptation: Vienna City... of...
2 Pages(500 words)Essay

...later on and the Yan state fell a victim of the Qin State and conquered. Gao Jianli who was an ally of Jing Ke had the urge to avenge his friend’s death. Being the famous lute player and taking advantage of summon by King Zheng to play the lute, he felt he had a good opportunity. Gao Jianli failed in his assassination attempt and later faced execution. Sima Qian had his own purposes in motives in history writing was to help the emperors come up with the necessary reforms. His main aim was to combine his own political witnessed events and the chronology of the region and biography of those considered as important figures. He interpreted scenarios, accounts and records of the past history. Sima...
2 Pages(500 words)Assignment

A History of Prussia

...﻿ Frederick the Great of PrussiaFrederick the great of Prussia showed signs of benevolence and moderation before ascending to throne. He was a great protagonist of religious and national sentiments with philosophy and arts being his favorite subjects. Even after inheriting the throne he gave major emphasis on the nation and its uplift. As an absolute monarch he sought to rebuild and lead his nation towards new developmental era. He formulized a code which served as a constitution of sorts. This code revealed the benevolent yet competitive nature of his rule. “This code was...
1 Pages(250 words)Essay
sponsored ads
Save Your Time for More Important Things
Let us write or edit the assignment on your topic "Reforms by Frederick the Great of Prussia and by Emperor Joseph II of Austria" with a personal 20% discount.
GRAB THE BEST PAPER

Let us find you another Assignment on topic Reforms by Frederick the Great of Prussia and by Emperor Joseph II of Austria for FREE!