Comments (0)
Add to wishlistDelete from wishlist
Cite this document
Summary
The paper 'The Qing or Manchu Dynasty' presents the Qing dynasty of China which was the mightiest and strongest dynasty which lasted more than 300 years according to Chinese history “One of the primary reasons for the triumph of the Qing dynasty was probably the character of the qin ruler…
Download full paperFile format: .doc, available for editing
HIDE THIS PAPERGRAB THE BEST PAPER98.9% of users find it useful 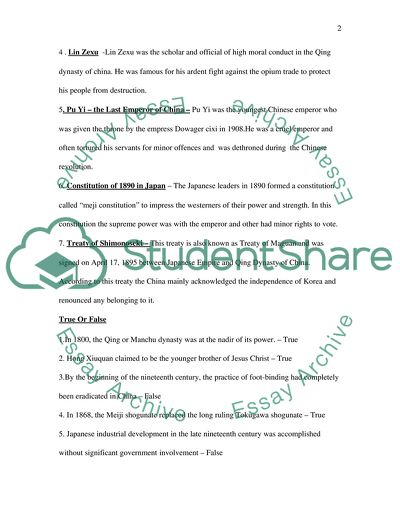 Extract of sample "The Qing or Manchu Dynasty"

What did Japanese women need to be freed from and what rights did the author demand for women? How does she deal with the issue of education?

Lin Zexu -Lin Zexu was the scholar and official of high moral conduct in the Qing dynasty of China. He was famous for his ardent fight against the opium trade to protect his people from destruction.
Pu Yi – the Last Emperor of China – Pu Yi was the youngest Chinese emperor who was given the throne by the empress Dowager Cixi in 1908. He was a cruel emperor and often tortured his servants for minor offenses and was dethroned during the Chinese revolution.
Constitution of 1890 in Japan – The Japanese leaders in 1890 formed a constitution called “Meiji Constitution” to impress the westerners of their power and strength. In this constitution, the supreme power was with the emperor and others had minor rights to vote.
Treaty of Shimonoseki – This treaty is also known as the Treaty of Magan and was signed on April 17, 1895, between the Japanese Empire and the Qing Dynasty of China. According to this treaty, China mainly acknowledged the independence of Korea and renounced any belonging to it.

CHECK THESE SAMPLES OF The Qing or Manchu Dynasty

China's Qing Dynasty and its Collapse

.... The Qing dynasty was started by a Manchu tribe, the Jurchen Aisin Gioro clan, from northeast of China (“Qing Dynasty”). The first three rulers had peaceful and prosperous reign and the administrative system used by the Qing rulers had mostly been inherited from the Ming dynasty with minor modifications. The military setup under the Qing was noteworthy. The army which was owned by the ruler was divided into separate units that had individual banners and troops. The civil servants were sometimes chosen from the banner men (“Qing Dynasty”). The Qing...
6 Pages(1500 words)Research Paper

Fall of late Qing dynasty- challenges from the West

...The fall of the Qing Dynasty The Manzu Dynasty ruled china since 1644AD with a firm hand. The Qing dynasty managed to break through territorial barriers on the northwestern frontier of china. The dynasty had strong commercial, technical, and symbolic resources and enjoyed benefits from Russia. Qing enjoyed territorial consolidation that was visible in Russia’s movement in Asia. During this time, china had advanced technology and commercial economy through its access to markets over the sea and land. This access fostered technological development, industrialization and increased long-distance trade. These activities drew...
7 Pages(1750 words)Essay

...Client Chinese Dynasties of the Mongol Yuan and the Manchu Qing In comparing the Mongolian Yuan dynasty with the Manchu, Qing dynasty, one can see some similarities and some important differences. While the Manchu created an iron fist that would control the Han Chinese and lead them with fear, the Mongolian rule was begun with the embracement of the Chinese culture by the first ruler, Kublai Kahn, but followed by a series of inconsistent rulers who would change the status of the Chinese culture in reference to the government leaving a wake of instability. The Manchu segregated...
7 Pages(1750 words)Essay

...Dynasty During the nearly seven hundred years from the Sui to the end of the Song, a mature political system based on principles originally established during the Qin and Han dynasties gradually emerged in china. After the Tang’s dynasty’s brief flirtation with Buddhism, State Confucianism became the ideological cement that held the system together. (Duiker & Spielvogel, 2009 , p.280) 1. The Sui dynasty (581-617) In the year 577 AD, Yang Chien set up Sui Dynasty. By 581 AD, the entire southern states were also brought under its control and thus Imperial China was founded. The Sui dynasty came to an abrupt ending because of its expensive...
2 Pages(500 words)Essay

...Ming Dynasty The rise of Ming dynasty was because of various revolts that toppled the previous regime. The Ming dynasty controlled China between 1368 and 1644. Emperor who aim was to see the success of dynasty after the fall of previous empire founded it. Ming dynasty was a prosperous period and respected cultural values. This paper seeks to discuss the description of Ming dynasty as competent, prosperous, but somewhat subdued ordinaries. Ming dynasty was a period of cultural revival, expansion and economic revival. Zhu Yuanzang reign made several changes, which include cutting taxes, and ensuring the government was cooperative. He also reorganized the administration. This period also saw the rise of military prowess. The number... of the...
1 Pages(250 words)Essay

...﻿Sui, Tang and Song Dynasty China’s political landscape in the ancient period was characterized by dynasties which were often ruled by members of thesame family. These dynasties would only relinquish power through subversion. The following is an analysis of the political, social and economic changes that occurred during the Sui, Tang and Song dynasty. The Sui dynasty lasted for a relatively short period – around 580 – 618 AD (Ebrey, Walthall, & Palais, 2009). Its existence, however, marked significant changes in the political structure, social and economic life of the Chinese. One of the notable changes in the political structure was the unification of...
1 Pages(250 words)Essay

...The Ming Dynasty: The Last Great Dynasty of China Teacher’s The Ming Dynasty: The Last Great Dynasty of China China’s long and rich history is divided into several dynasties in the span of several thousands of years, most of which lasted for three hundred years. One of the nation’s last dynasties to have brought great expansion and vibrant development to its people was the Ming Dynasty. It lasted for more than two hundred and fifty years under the rule and reign of several emperors who played a great role in making this period of time where China experienced one of the greatest developments and prosperity in almost all...
6 Pages(1500 words)Research Paper

...A2: The impressive governance abilities of Han dynasty’s rulers as seen in Liu Pang and the emperors which came after him led to the initiation of a celebrated period in China’s history. As noted by Houghton, the progress which was achieved by the nation during the period encompassed notable achievements in a range of fields including the political, economic and social spheres of the land (21). Tracing the drastic yet gradual transformation of China from the tribal setup of the Neolithic era to the centralized model which was advanced during the Han dynasty, it can be stated that Han emperors essentially promoted and enhanced the principles of Shi Huangdi who believed in the notion of maintaining the...
4 Pages(1000 words)Essay

...Reforms Qing dynasty and members of its elites introduced significant changes in the military department of China republic after defeat by Japan between 1896 and 1901. The changes in the military defense resulted from efforts of Yuan Shih­ kai and Chang Chih-tung. Military reforms included the introduction of new local soldiers within the security system. Regional armies who created the reforms had their military forces remaining unchanged by the Allied forces. The resultant local troops remained under the influence of Chinese government. Qing dynasty created improvements in military defense through the Manchu court. Manchu court...
2 Pages(500 words)Essay
sponsored ads
Save Your Time for More Important Things
Let us write or edit the assignment on your topic "The Qing or Manchu Dynasty" with a personal 20% discount.
GRAB THE BEST PAPER

Let us find you another Assignment on topic The Qing or Manchu Dynasty for FREE!