Africans in the Colonial Period & The Revolutionary Era - Essay Example

Comments (0)
Add to wishlistDelete from wishlist
Cite this document
Summary
Depending on which colony slaves lived in, the way they were treated and the work they performed varied. Slaves in southern colonies typically worked under harsh conditions, while slaves in the middle and New England colonies were fewer, had more freedom, and were treated more humanely…
Download full paperFile format: .doc, available for editing
HIDE THIS PAPERGRAB THE BEST PAPER99% of users find it useful 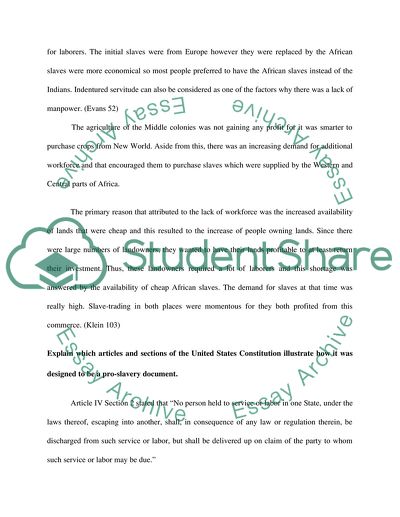 Extract of sample "Africans in the Colonial Period & The Revolutionary Era"

Slave trade in New England and Middle Colonies The Atlantic Slave Trade is defined as the selling of slaves that occurred within the countries located around the Atlantic Ocean. This was initiated by the people from Portugal and lasted for almost four hundred years. The slaves that were sold originated from Africa’s eastern and central part. These people from Africa was kidnapped and raided against the law. The slaves that were from Africa were estimated to be around ten to thirteen million throughout the time the Atlantic Slave Trade was happening. Since there was a large number of Africans being transported to the New World, most of the Africans label this as Maafa which also meant holocaust. The economic cycle which was comprised of Triangular Trade and Middle Passage also included the slaves. (Klein 103)
Depending on which colony slaves lived in, the way they were treated and the work they performed varied. Slaves in southern colonies typically worked under harsh conditions, while slaves in the middle and New England colonies were fewer, had more freedom, and were treated more humanely.
The New England Slave Trade was considered a success for it paved the way for the establishment of New England’s economic structure. The wealthy class rose into power due to the profit gained from trading slaves. The monetary gains acquired through slave-trading were used for further enhancement of culture and expansion of philanthropic works. (Greene, p. 319)
New England proved to be the leading slave merchant in comparison to American colonies.
Slavery in the middle colonies also flourished similar to slave-trading in New England. While this system ensured the growth of the free black population, it also contributed to the need for laborers. The initial slaves were from Europe however they were replaced by the African slaves were more economical so most people preferred to have the African slaves instead of the Indians. Indentured servitude can also be considered as one of the factors why there was a lack of manpower. (Evans 52)
The agriculture of the Middle colonies was not gaining any profit for it was smarter to purchase crops from New World. Aside from this, there was an increasing demand for additional workforce and that encouraged them to purchase slaves which were supplied by the Western and Central parts of Africa.
The primary reason that attributed to the lack of workforce was the increased availability of lands that were cheap and this resulted to the increase of people owning lands. Since there were large numbers of landowners, they wanted to have their lands profitable to at least return their investment. Thus, these landowners required a lot of laborers and this shortage was answered by the availability of cheap African slaves. The demand for slaves at that time was really high. Slave-trading in both places were momentous for they both profited from this commerce. (Klein 103)
Explain which articles and sections of the United States Constitution illustrate how it was designed to be a pro-slavery document.
Article IV Section 2 stated that “No person held to service or labor in one State, under the laws thereof, escaping into another, shall, in consequence of any law or regulation therein, be discharged from such service or labor, but shall be delivered up on claim of the party to whom such service or labor may be due.”
It was in 1793 that the federal fugitive slave law is enacted, providing for the return of the slaves who had escaped and crossed state lines. There were also state laws that legalized slave-trading. Connecticut had black servants or slaves as early as 1639, with slavery becoming an accepted system of labor by 1680. Slavery was legalized in Connecticut when Massachusetts "Body of Liberties" passed in 1641 and was subsequently incorporated in the "Articles of the New England Confederation." (Evans 44)
REFERENCES:
Klein, Herbert S. and Jacob Klein. The Atlantic Slave Trade. Cambridge University Press, 1999. pp. 103-139.
Evans, Gwendolyn. "The Slave in Connecticut during the American Revolution." Connecticut Historical Society Bulletin XXX (1965): 44-61.
Greene, Lorenzo. The Negro in Colonial New England 1620-1776. New York: Columbia University Press, 1942.
McManus, Edgar J. Black Bondage in the North. Syracuse: Syracuse University Press, 1973.
Steiner, Bernard. History of Slavery in Connecticut. Baltimore: The Johns Hopkins Press, 1893.
Lorenzo Johnston Greene, “The Negro in Colonial New England, 1620-1776,” p.319. Read More
Share:
Tags
Cite this document
(“Africans in the Colonial Period & The Revolutionary Era Essay”, n.d.)
Retrieved from https://studentshare.org/history/1545300-africans-in-the-colonial-period-the-revolutionary-era

(Africans in the Colonial Period & The Revolutionary Era Essay)
https://studentshare.org/history/1545300-africans-in-the-colonial-period-the-revolutionary-era.

“Africans in the Colonial Period & The Revolutionary Era Essay”, n.d. https://studentshare.org/history/1545300-africans-in-the-colonial-period-the-revolutionary-era.
Comments (0)
Click to create a comment or rate a document

Gender in the Colonial period

...Gender in the Colonial Period This paper uses the Reader’s Companion to American History as a primary source. It is a collection of entries defining issues, significant events and people who shaped history with almost 400 contributing authors including biographers, journalists and scholars. The Reader’s Companion is sponsored by the Society of American Historians which is an association dedicated to encouraging literary excellence in the writing of history and biography. Although women came to America expecting some of the same liberties and freedoms their men fought for, it was a long time before they were able to enjoy the rights and freedoms they enjoy today. Puritans who settled in...
5 Pages(1250 words)Essay

...to the constitution leading to a revolutionary war is presented in detail on a separate page. The Laughter Genealogy website contains historical material including maps, photos and articles about early North America. This website is a great source of information for researchers seeking genealogy, books and military resources. However, the complexity of website makes it hard to find an article of interest. The information ranges from recent news articles to earlier American history explorations. Little effort has been made to keep the menus simple and relevant. Additionally, the recency and authenticity of the presented information is also questionable with a number of errors corrected by audience from time to time....
1 Pages(250 words)Essay

... Revolutionary Era In the shores of Eastern Virginia, time between 1640 and 1676 were generally years of great upheaval as series of revolutions and revolutionary wars continued challenging the old hierarchy and order of monarchs and aristocrats. People started brewing ideas of freedom and equality that have never stopped molding the world since that era. They became widespread and effective. This revolutionary era commenced in North America in 1775 hence becoming one of the most influential countries in Europe1. Thirteen colonies in North America joined and broke free from the British Empire, merged, then became the United States of America. They deterred the rules and regulations of Great Britain Parliament that governed them... from...
3 Pages(750 words)Essay

... Colonial Era The unconscionable conduct applied by the colonists for the duration of the majestic epoch was strappingly disreputable and brought incessant disagreement between the colonists and the Indians. Fascinatingly, there were assorted reactions of conflicts and corporations throughout the era due to colonists’ ravenousness for supremacy and territory and the experience of other colonists such as the Spaniards. What was expected to be cordiality turned out to be the most horrible thing the Indians had ever hoped for? The entrance of settlers later dictated their culture, lifestyle and deeply condensed their population. Can your enemy be too powerful to influence your life? It was war and disagreement. This article explains... the...
3 Pages(750 words)Essay

...itself from the revolutionary war was the idea of diversity. Although the idea of diversity is an element that was always present since the dawn of the early colonies, it really did not become apparent until the industrial era. Over the years, America to be exceptional is the freedom is the diversity that it enjoys due to blend of cultures it possesses. America has been known as the “melting pot” of assimilation of cultures and has given new opportunities to immigrants throughout history. Since the day of the colonists, America has a long history and spirit to welcome immigration that has harnessed its growth. With immigration, America has become exceptional because it has cultivated new...
6 Pages(1500 words)Essay

America in the revolutionary era

...Revolutionary Era Weapons. 1Humphrey Carol. The Revolutionary Era: Primary Documents on Events from 1776 to 1800. Westport, Conn: Greenwood Publishing Group, 2003. 2"Tactics and weapons of the American revolution." Doublegv.com. Last Modified April 2013. http://www.doublegv.com/ggv/battles/tactics.html What is it? Cannons, also known the Queen of the Battlefield, were a dangerous weapon used during the American Revolution. Another weapon was the submarine, also known as "the Turtle" during the Revolutionary Era. The submarine was invented by David Bushnell (Humphrey, 2010, 22-30). 3Hamilton John. Weapons of the American Revolution: ABDO...
1 Pages(250 words)Annotated Bibliography

Gender, Race, and Class in Latin American Literature and Film

..., Tropicalismo, and Como era gostosomeufrancês." Latin American Studies Association, 1998, 160-189. Print The author who was a professor in Florida international university wrote the book he majored on the height of Brazil’s political repression through revolutionary and consequential art. Through the use of different film makers like Leson Pereira dos Santos directed a period –piece inspired by the 1557 account of a German captive among the Brazilians. During his captivity, he was waiting to be eaten by his captives in their ritualistic cannibalism is paramount to understanding the author intention to bring out the meaning of the book. Alternatively, the author in a different issue he...
5 Pages(1250 words)Annotated Bibliography
sponsored ads
Save Your Time for More Important Things
Let us write or edit the essay on your topic "Africans in the Colonial Period & The Revolutionary Era" with a personal 20% discount.
GRAB THE BEST PAPER

Let us find you another Essay on topic Africans in the Colonial Period & The Revolutionary Era for FREE!