Reformation and the Arts - Assignment Example

Comments (0)
Add to wishlistDelete from wishlist
Cite this document
Summary
The paper "Reformation and the Arts" aims to discuss the Protestant Reformation—its key early events and issues—and its causes. Then the paper will describe the Counter-Reformation and, using examples, discuss the impact of each on the visual arts…
Download full paperFile format: .doc, available for editing
HIDE THIS PAPERGRAB THE BEST PAPER93.2% of users find it useful 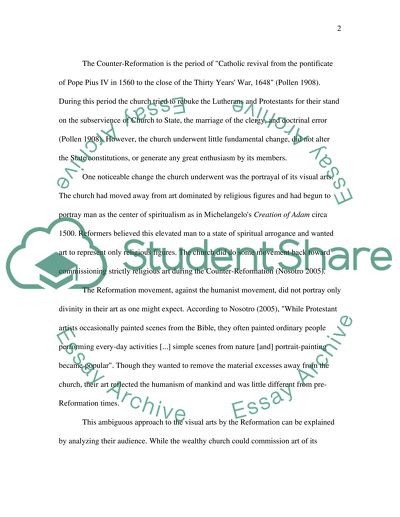 Extract of sample "Reformation and the Arts"

Reformation and the Arts Discuss the Protestant Reformation—its key early events and issues—and its Causes. Then describe the Counter-Reformation. Then, using examples, discuss the impact of each on the visual arts.
The great schism in the Catholic Church during the Renaissance period would eventually lead to the Reformation as believers saw the church moving away from their ideal of God. Reformers such as Martin Luther formed separate sects outside the church to correct what they perceived as heresy. In an attempt to keep the followers in the church, the Catholic religion undertook their own self-reformation, which came to be known as the Counter-Reformation. One aspect of their disagreement was over the portrayal of their visual art. The resulting factions created different artistic styles, though their outcome would be counter productive to their original intent.
The church had fallen under negative scrutiny during the fourteenth century and was marked by material excesses by church leaders while oppressing the lower clergy. Humanism and the Renaissance ideas were cultivated in Rome and their perceived abuses became the target of newly empowered city-states. The decline of papal power and material corruption of the church during the 14th and 15th centuries set the stage for the first severe blow to the church, the papal schism in 1378 (Kirsch 1911). However, the most popular symbolic blow came when Martin Luther nailed the Ninety-Five Theses to the door of the Wittenberg Church in 1517 (Bates 1999, Luther 1915). The Theses called for a dramatic overhaul of the church and began the Reformation.
The Counter-Reformation is the period of "Catholic revival from the pontificate of Pope Pius IV in 1560 to the close of the Thirty Years War, 1648" (Pollen 1908). During this period the church tried to rebuke the Lutherans and Protestants for their stand on the subservience of Church to State, the marriage of the clergy, and doctrinal error (Pollen 1908). However, the church underwent little fundamental change, did not alter the State constitutions, or generate any great enthusiasm by its members.
One noticeable change the church underwent was the portrayal of its visual arts. The church had moved away from art dominated by religious figures and had begun to portray man as the center of spiritualism as in Michelangelos Creation of Adam circa 1500. Reformers believed this elevated man to a state of spiritual arrogance and wanted art to represent only religious figures. The church did do some movement back toward commissioning strictly religious art during the Counter-Reformation (Nosotro 2005).
The Reformation movement, against the humanist movement, did not portray only divinity in their art as one might expect. According to Nosotro (2005), "While Protestant artists occasionally painted scenes from the Bible, they often painted ordinary people performing every-day activities [...] simple scenes from nature [and] portrait-painting became popular". Though they wanted to remove the material excesses away from the church, their art reflected the humanism of mankind and was little different from pre-Reformation times.
This ambiguous approach to the visual arts by the Reformation can be explained by analyzing their audience. While the wealthy church could commission art of its choosing, the Reformers had to serve the desires of their patronage. These were often wealthy patrons that demanded imposing and garish works to satisfy their local and family pride (Spelman 1951 p. 172).
References
Bates, L. (1999, August 2). Martin Luther 1483-1546. Retrieved January 26, 2007, from http://www.educ.msu.edu/homepages/laurence/reformation/Luther/Luther.htm
Kirsch, J. (1911). The Reformation. In Catholic Encyclopedia (Vol. 12). New York: Robert Appleton Company. Retrieved January 26, 2007, from http://www.newadvent.org/cathen/12700b.htm
Luther, M. (1915). Disputation of Doctor Martin Luther on the power and efficacy of indulgences. Philadelphia: A. J. Holman Company. (Original work published 1517) Retrieved January 26, 2007, from http://www.iclnet.org/pub/resources/text/wittenberg/luther/ninetyfive.txt
Nosotro, R. (2005). Art of the Reformation and Counter-Reformation . Retrieved January 26, 2007, from http://www.hyperhistory.net/apwh/essays/comp/cw20reformationart.htm
Pollen, J. H. (1908). The Counter-Reformation. In Catholic Encyclopedia (Vol. IV). New York: Robert Appleton Company. Retrieved January 26, 2007, from http://www.newadvent.org/cathen/04437a.htm
Spelman, L. P. (1951). Luther and the arts [Electronic version]. The Journal of Aesthetics and Art Criticism, 10(2), 166-175. from JSTOR. Read More
Share:
Tags
Cite this document
(“Reformation and the Arts Assignment Example | Topics and Well Written Essays - 500 words - 4”, n.d.)
Reformation and the Arts Assignment Example | Topics and Well Written Essays - 500 words - 4. Retrieved from https://studentshare.org/history/1539091-essay

CHECK THESE SAMPLES OF Reformation and the Arts

The Arts: Renaissance and Reformation, Enlightenment and Revolution

...given to the Reformation in the views of many of the historians. The Northern Renaissance is the Renaissance in northern Europe. It was by the late 15th century that the ideas of the Italian Renaissance humanism spread across Europe and influenced many national and localized movements such as the French Renaissance, German Renaissance and others. Each of these had their own different characteristics and strengths. Italian art and artists such as Leonardo Di Vinci were commissioned and great palaces were built to import the art. It was also believed that the Northern Renaissance was closely linked to the Protestant Reformation and to the series of external and internal...
3 Pages(750 words)Essay

...with the peasants and common man. Far more important, was that it also went over well with King Henry VII. This monarch requested a divorce from the Pope, but was denied. He was so angry at the denial that he declared the English sovereign head of the Church of England. It was a complete break from the Catholic church and would affect Europe for centuries to come. The break affected more than society's values, it also affected the literature and art of the era. With Luther's emphasis on individual learning of the Bible, printing of books and literacy became more important and art reflected a brighter more realistic approach. Reformation/pg 2 With the increase in literacy...
2 Pages(500 words)Essay

...1. Discuss the causes of the Protestant Reformation. Martin Luther started the Protestant Reformation when he nailed his manifesto on the chapel door on October 31, 1517, in Wittenberg. The manifesto consisted of ninety-five theses. That day was the Feast of All Saints in which pious folk came to venerate the precious relics of His Highness the Elector, Frederick the Wise. Valuable indulgences were gained when one venerates the relics. Luther's document were about the abuse of the granting of indulgences to the people. He stated that those preaching in favor of indulgences make a serious error when they say that these indulgences alone can grant man salvation. Luther stated that the indulgences have only...
6 Pages(1500 words)Essay

...This is the first incomplete draft and have around 11 pages. Check it and let me know whether im going on the right path. It is not formatted and proof read yet. thanks Art is the product that is formed by using some of the human activities such as the human intention of forming some thing senses used in the formation search for the things and mind. It contains an action of human that is also with the object and collection of actions by search to form some thing called art. There is no such definitions of arts it has not the clear and made definition. However the activities that are related with the formation of art are the human creativity. The art work contains variety of combinations that is the combination of different ideas... and...
11 Pages(2750 words)Article

...Protestant Reformation al Affiliation Protestant reformation refers to a religious change that swept across Europeduring the 16th century. The main contributors of the reforms that took place were Martin Luther, John Calvin and Hulrich Zwingli. They were against the ways of the Roman Catholic Church. Martin Luther one of the main reformists came up with the 95 Theses, which was a list of the Roman Catholic Church practices that he opposed. Martin Luther stated that salvation could be gained by faith alone and not by faith and good deeds as the Catholic Church stated. He was also against the seven catholic sacraments which included confession, prayers to saints, the use of religious relics, and celibacy among others. He was against... ...
4 Pages(1000 words)Essay

...led to his passing away and also another 50,000 Huguenot’s deaths called as the “St. Bartholomew’s Day Massacre in 1572. Besides women who suffered during the period of Reformation, other women contributed a lot to the period. Women took part in the arts and some were authors of visionary and mystical literature, poetry, stories and treatise during that period. Christine de Pizan (d c.1430), a laywoman, was the most outstanding female writer during the Middle Ages. Many women martyrs laid down their life in sacrifice during the period of the Reformation. Their steadfastness and love for their religion has earned them a place in history they so well deserve. They are looked upon as role...
16 Pages(4000 words)Essay
sponsored ads
Save Your Time for More Important Things
Let us write or edit the assignment on your topic "Reformation and the Arts" with a personal 20% discount.
GRAB THE BEST PAPER

Let us find you another Assignment on topic Reformation and the Arts for FREE!