Comments (0)
Add to wishlistDelete from wishlist
Cite this document
Summary
The history of foundation of Islam is clothed with the veils of legend and obscured by multiple conflicting accounts that make its true outline all but impossible to discern with any clarity.But it is incontrovertible that Northern-Arabia prior to Muhammad was a predominantly tribal environment, structured by exigencies of camel herding…
Download full paperFile format: .doc, available for editing
HIDE THIS PAPERGRAB THE BEST PAPER97.6% of users find it useful 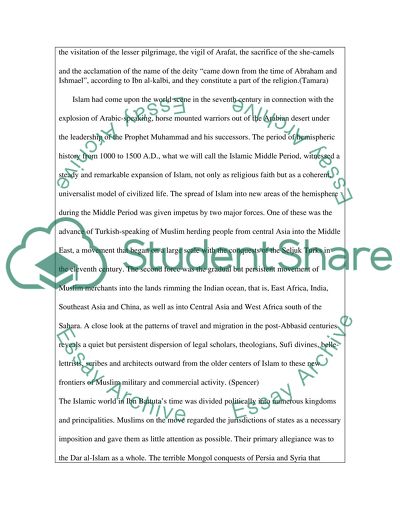 Download file to see previous pages The history of foundation of Islam is clothed with the veils of legend and obscured by multiple conflicting accounts that make its true outline all but impossible to discern with any clarity. But it is incontrovertible that Northern-Arabia prior to Muhammad was a predominantly tribal environment, structured by exigencies of camel herding, trading, feuding, and raiding. The ‘civilized’ area of Arabia was not in the heartland where Islam was born, but rather had long been located in the coastal south and along the gulf. Inland, the only possible location for development of any sort of state was in the impoverished and remote region dominated by Mecca and the Quraysh clan, where ancient pilgrimage centers protected markets in perfume, leather, and other trade goods. But no such development occurred until the advent of Muhammad, who was born around 570, received his first revelations at the age of forty, undertook his momentous journey to Medina (the hijra) in 622 (year one in the Muslim calendar) and died in 632, having led his people in the conquest of the whole Arab peninsula, and having initiated their great and ultimately successful war against the surrounding Sasanid and Byzantine empires.The religion of Islam is from the Muslim point of view, “the religion of Abraham and Ishmael” the forefathers of the Muslims. According to Ibn al-Kalbi, who conveys also the belief of his predecessors, Ishmael settled in Mecca where he became the father of many children who supplanted the Amalekites of Mecca; to him is ascribed the origin of the Arabs.

Arabs. The Qur'an states that Abraham and Ishmael "raised the foundation of the House"

and established a "proper worship". The rites of the pilgrimage, the circumambulation,

the visitation of the lesser pilgrimage, the vigil of Arafat, the sacrifice of the she-camels

and the acclamation of the name of the deity "came down from the time of Abraham and
Ishmael", according to Ibn al-kalbi, and they constitute a part of the religion.(Tamara)

explosion of Arabic-speaking, horse mounted warriors out of the Arabian desert under

the leadership of the Prophet Muhammad and his successors. The period of hemispheric

steady and remarkable expansion of Islam, not only as religious faith but as a coherent,

universalist model of civilized life. The spread of Islam into new areas of the hemisphere

during the Middle Period was given impetus by two major forces. One of these was the

East, a movement that began on a large scale with the conquests of the Seljuk Turks in

the eleventh century. The second force was the gradual but persistent movement of

Southeast Asia and China, as well as into Central Asia and West Africa south of the

Sahara. A close look at the patterns of travel and migration in the post-Abbasid centuries

lettrists, scribes and architects outward from the older centers of Islam to these new

and principalities. Muslims on the move regarded the jurisdictions of states as a necessary

imposition and gave them as little attention as possible. Their primary allegiance was to

the Dar al-Islam as a whole. The terrible Mongol conquests of Persia and Syria that

CHECK THESE SAMPLES OF Islamic History

...Islamic Faith and World Civilization Islamic religion and society has significantly contributed to the world civilization and global transformation. The Islamic society is believed to have begun strongly from the period when the Prophet came to the world and this marks establishment of Medina until his death. This was the most important period in the Islamic history since it also involves the caliphate of the first four caliphs thus making it similar to the apostolic age of Christianity. The period of the Caliphs is highly regarded by Muslims as the greatest turning point of the Islamic religions and they strongly use this period as...
3 Pages(750 words)Essay

...? Islamic Banking of the Introduction Islamic banking process is consistent with the principles of Sharia that does not allowbanking with interest on loans. It has been introduced to make Islamic economies follow religious believes even in their economic activities. This paper aims to highlight three major differences of Islamic banking with regular banking system. Differences between Islamic Banking and Regular Banking With and Without Interest on Loans The banking institutions in any economy play a crucial role in the progress of the economy. One of the major functions of commercial banks is to mobilize savings and offer loans to the potential investors...
4 Pages(1000 words)Term Paper

...Islam history Islam revolves around ‘Islamic’ as a religion as well as those people who ascribe to the belief. The people who adhere to the religion are ideally representatives of those who submit to God. The Middle East region has had great political, economic as well as military influence from Islam as it is believed to be the region of its origin. The religion and culture of Islam has spread across the globe and its influence is evident all over especially after the era of civilization. This paper intends to study in details the historical background of Islam since its birth to the modern day ideologies that holds it....
3 Pages(750 words)Essay

...that this event possesses far more significance with regards to the value of piety that it has for the average Muslim. The history of Hajj dates back to the era of Abraham, and in fact there is a verse in the Quran which is known as the "Surah-Al-Hajj", which gives a holistic picture of Hajj to Muslims. Muslims, believing as they firmly do, in the Quran and Sunnah (acts of the Prophet Mohammad) take this as a given obligation, as one of the very foundations of Islam.1 (Lindsay, 2005). During the era of Abraham, as per what was revealed to him, he constructed the House of God (Ka'ba). After that, he would come every year to perform pilgrimage at this House which he constructed and this practice was...
2 Pages(500 words)Essay

...Running Head: Religion and Theology Islamic Symbolism and History Commons Islamic Symbols Symbols abound all over the cultures of Islam, from visual and literary to mainstream culture. It is reasonable to think that knowledge of Islamic culture is imperfect without an understanding of the abundant array of symbols of Islam (Ahmed, 2002). Calligraphy and geometric shapes extracted from the holy texts of Islam have become a foundation of Islamic art (Rodrigues, 2008). Surprisingly, Arabic writing provided itself for integration into material art. Specific verses and figures from the Qur’an have attained...
2 Pages(500 words)Essay

...Inserts His/her Inserts Inserts Grade (30, 10, Islamic Art History: Architecture Introduction Islamic architecture includes a wide range of designs of buildings and structures that are influenced by both religious and secular styles that became popular after advent of Islam. From 6th century onwards Islamic architecture has been a dominant force in architecture. The basic types of Islamic architecture are the Mosque, the Palace, the Fort, and the Tomb. Mosque is the place of worship of Muslims. Muslim rulers were mainly responsible for spreading Islamic architecture from one region to another. They built forts and...
4 Pages(1000 words)Term Paper

... of embellishments. This refers to the fact that the Islamic art has always been creative and original in its nature and assimilates various Islamic traditions and cultures in order to represent the artistic aesthetics in a unique and outstanding manner. Bibliography Ettinghausen, Richard, Oleg Grabar, Marilyn Jenkins-Madina, Islamic Art and Architecture 650-1250 (2nd ed.), 2003, Yale University Press. Heilbrunn Timeline of Art History. The Art of the Umayyad Period and the Metropolitan Museum of Art, 2012, Web. Retrieved on November 6, 2012... Islamic Art The second of the four significant Islamic caliphates formed after the demise of Muhammad was the Umayyad Caliphate. The Umayyad dynasty ruled it, the...
2 Pages(500 words)Essay

...Islamic History- The Use of Religion Here Here Islamic History Introduction In the early Safavid Empire, politicalpower and religion was interconnected. The right to rule was determines by the Ottoman’s implementation of the Holy laws and their ability to successfully fight with Christians. Religious leaders even became the tool for the government. Body How the Ottoman and Safavid rulers used religion to legitimize their rule The rulers recognized that their success would be based on their ability to convince their followers that they are descendants of Muhammad. According to the letter from Selim and Isma’il, Sha Isma’il made his followers believe that he was the...
3 Pages(750 words)Research Paper

...Islamic art history Islamic art history entails the visual arts produced as early as 7th century by the people who lived within the territories that were ruled and inhabited by culturally Islamic population. The Islamic artwork was initially supported the legitimization of various themes in the society such as leadership, religion and peace, however, the impression of most of the Islamic artwork took a dynamic twist during the nineteenth century when it advocated for decolonization and addresses issues of violence that marred the Islamic territory. Understanding the Islamic...
2 Pages(500 words)Essay

...﻿Introduction: The presence of women is vital to all human being on this planet. In Islam, women are given special rights and treatments but unfortunately they are usually denied of those rights. If we take a look at the Islamic history we will find out that women have held a high status and position during the time of Prophet Mohammad (PBUH). Hazrat Khadijah, the first wife of Prophet Mohammad (PBUH), was the first person to convert to Islam. After the death of Hazrat Khadijah, Hazrat Ayesha became Prophet’s favourite wife. She later became an influential scholar and a great source of Prophet Mohammad’s Hadiths. Many western nations criticize Islam in...
11 Pages(2750 words)Research Paper
sponsored ads
Save Your Time for More Important Things
Let us write or edit the essay on your topic "Islamic History" with a personal 20% discount.
GRAB THE BEST PAPER

Let us find you another Essay on topic Islamic History for FREE!