Comments (0)
Add to wishlistDelete from wishlist
Cite this document
Summary
The paper "Politics and War in Afghanistan during the Novel The Kite Runner" discusses that Khaled Hosseini's spectacular first appearing novel The Kite Runner follows a young boy, Amir, as he encounters the challenges that meet him on the pathway to manhood—testing finding love…
Download full paperFile format: .doc, available for editing
HIDE THIS PAPERGRAB THE BEST PAPER94.4% of users find it useful 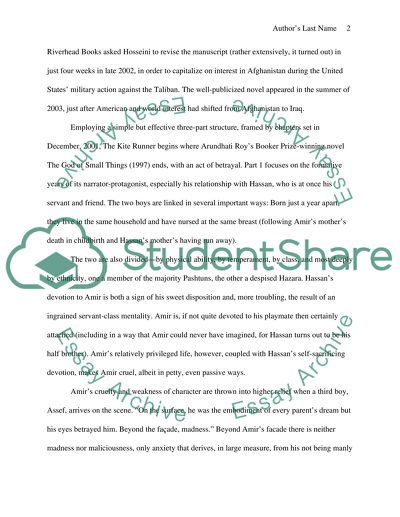 Download file to see previous pages Touted as the first Afghan novel written in English, Khaled Hosseini's The Kite Runner makes up part of the growing branch of Muslim American immigrant literature (along with Diana Abu-Jaber's Crescent and Laila Halaby's West of the Jordan, both published in 2003). Loosely autobiographical, The Kite Runner begins in the same well-off Kabul neighborhood in which the author grew up with his diplomat father and schoolteacher mother. The action then shifts to California, where the family resettled in the early 1980s after fleeing Afghanistan.
Hosseini, a practising physician, began the novel in March 2001, and, working in the early morning hours, had it half-completed by September 11, 2001. The terrorist attacks which occurred on that day left him and other Muslim Americans feeling anxious about their safety and also turned his unfinished novel into a hot property. After making a successful preemptive bid, Riverhead Books asked Hosseini to revise the manuscript (rather extensively, it turned out) in just four weeks in late 2002, in order to capitalize on interest in Afghanistan during the United States' military action against the Taliban. The well-publicized novel appeared in the summer of 2003, just after American and world interest had shifted from Afghanistan to Iraq.
Employing a simple but effective three-part structure, framed by chapters set in December 2001, The Kite Runner begins where Arundhati Roy's Booker Prize-winning novel The God of Small Things (1997) ends, with an act of betrayal. Part 1 focuses on the formative years of its narrator-protagonist, especially his relationship with Hassan, who is at once his servant and friend. The two boys are linked in several important ways: Born just a year apart, they live in the same household and have nursed at the same breast (following Amir's mother's death in childbirth and Hassan's mother's having run away).
The two are also divided-by physical ability, by temperament, by class, and most deeply by ethnicity, one a member of the majority Pashtuns, the other a despised Hazara. Hassan's devotion to Amir is both a sign of his sweet disposition and, more troubling, the result of an ingrained servant-class mentality. Amir is, if not quite devoted to his playmate then certainly attached (including in a way that Amir could never have imagined, for Hassan turns out to be his half brother). Amir's relatively privileged life, however, coupled with Hassan's self-sacrificing devotion, makes Amir cruel, albeit in petty, even passive ways.
Amir's cruelty and weakness of character are thrown into higher relief when a third boy, Assef, arrives on the scene. "On the surface, he was the embodiment of every parent's dream but his eyes betrayed him. Beyond the facade, madness." Beyond Amir's facade, there is neither madness nor maliciousness, only anxiety that derives, in large measure, from his not being manly enough to earn the love of his father, Baba, a successful, decidedly secular businessman highly respected for his business savvy, physical prowess, and charitable acts.
Amir's character is a typical Afghani character of contemporary society. His character has been delineated by the writer very carefully and according to the norms and standing customs and conventions of Afghan society of that time.  ...Download file to see next pagesRead More
Share:
Tags
Cite this document
(Politics and war in Afghanistan during the novel Kite Runner Literature review, n.d.)
Politics and war in Afghanistan during the novel Kite Runner Literature review. https://studentshare.org/history/1504874-politics-and-war-in-afghanistan-during-the-novel-kite-runner
(Politics and War in Afghanistan During the Novel Kite Runner Literature Review)
Politics and War in Afghanistan During the Novel Kite Runner Literature Review. https://studentshare.org/history/1504874-politics-and-war-in-afghanistan-during-the-novel-kite-runner.
“Politics and War in Afghanistan During the Novel Kite Runner Literature Review”. https://studentshare.org/history/1504874-politics-and-war-in-afghanistan-during-the-novel-kite-runner.
Comments (0)
Click to create a comment or rate a document

10 Pages(2500 words)Assignment
sponsored ads
Save Your Time for More Important Things
Let us write or edit the literature review on your topic "Politics and War in Afghanistan during the Novel The Kite Runner" with a personal 20% discount.
GRAB THE BEST PAPER

Let us find you another Literature review on topic Politics and War in Afghanistan during the Novel The Kite Runner for FREE!