Comments (1)
Add to wishlistDelete from wishlist
Cite this document
Summary
In the paper “The Chocolate War” the author analyzes a civil war that has left the country divided and economically devastated. The Ivory Coast provides 40% of the world’s supply of cocoa, the key ingredient in chocolate, and ongoing political instability have badly disrupted the industry…
Download full paperFile format: .doc, available for editing
HIDE THIS PAPERGRAB THE BEST PAPER95.5% of users find it useful 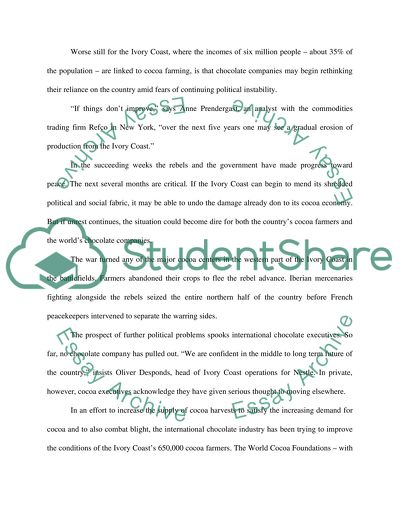 Extract of sample "The Chocolate War"

﻿The Chocolate War
Ouedrago’s farm is in Za, a village in the fertile west-central region of the Ivory Coast, a West African nation long considered a bastion of peace and relative prosperity. But in September 2002, a civil war erupted that has left the country politically divided and economically devastated. Chocolate lovers everywhere ought to be paying close attention. The Ivory Coast provides 40% of the world’s supply of cocoa, the key ingredient in chocolate, and war and ongoing political instability have badly disrupted the industry.
The cocoa harvest, normally about 1.3 million tons a year, was cut by more than a third in 2002. During the height of fighting in January 2003, the price of cocoa on world commodity exchanges more than doubled surpassing $2,700 a ton. While it has fallen back to about $1,700 a ton now that a tentative peace prevails, it remains historically high. (Cocoa was trading for about $1,000 a ton before the outbreak of the war).
Chocolate companies have already passed some of the added cost to the consumers. In 2003, Nestle increased its chocolate prices by 10% while Hershey’s and Mars raised the wholesale price of some of their most popular candy bars y a similar amount. Swiss chocolate maker, Lindt, Kellogg’s Keebler, and Kraft’s Nabisco have also raised prices.
The war has also set back attempts by the world’s large chocolate companies to curb the use of child labor and help improve the lives of the people in the Ivory Coast by teaching them new farming techniques and business practices.
Worse still for the Ivory Coast, where the incomes of six million people – about 35% of the population – are linked to cocoa farming, is that chocolate companies may begin rethinking their reliance on the country amid fears of continuing political instability.
“If things don’t improve,” says Anne Prendergast, an analyst with the commodities trading firm Refco in New York, “over the next five years one may see a gradual erosion of production from the Ivory Coast.”
In the succeeding weeks the rebels and the government have made progress toward peace. The next several months are critical. If the Ivory Coast can begin to mend its shredded political and social fabric, it may be able to undo the damage already don to its cocoa economy. But if unrest continues, the situation could become dire for both the country’s cocoa farmers and the world’s chocolate companies.
The war turned any of the major cocoa centers in the western part of the Ivory Coast in the battlefields. Farmers abandoned their crops to flee the rebel advance. Iberian mercenaries fighting alongside the rebels seized the entire northern half of the country before French peacekeepers intervened to separate the warring sides.
The prospect of further political problems spooks international chocolate executives. So far, no chocolate company has pulled out. “We are confident in the middle to long term future of the country,” insists Oliver Desponds, head of Ivory Coast operations for Nestle. In private, however, cocoa executives acknowledge they have given serious thought to moving elsewhere.
In an effort to increase the supply of cocoa harvests to satisfy the increasing demand for cocoa and to also combat blight, the international chocolate industry has been trying to improve the conditions of the Ivory Coast’s 650,000 cocoa farmers. The World Cocoa Foundations – with additional funding from the U.S. Agency for International Development – is sponsoring a series of schools to teach planters better farming practices.
This article provides insights regarding the decrease in supply of cocoa in different countries leading to increase and price of the commodity and increase in the demand for cocoa.
REFERENCE:
Bade, R., & Parkin, M. (2001). Foundations of microeconomics.Addison Wesley Paperback .
Kahn, Jeremy (2003).The Chocolate War. Fortune. Read More
Share:
Tags
Cite this document
(“The Chocolate War Case Study Example | Topics and Well Written Essays - 500 words”, n.d.)
The Chocolate War Case Study Example | Topics and Well Written Essays - 500 words. Retrieved from https://studentshare.org/history/1502460-decrease-in-supply-of-cocoa-and-pricing

jj
jjohnston added comment 5 days ago
Student rated this paper as
The topic of "The Chocolate War " was impossible to find. I spent too much time to find it. Here at StudentShare, I got the best sample. Many thanks!

CHECK THESE SAMPLES OF The Chocolate War

...?Howard Liu Stephen Miller English 12 Period C 09 November Preserving the Status Quo: A Violent Presentation in The Chocolate War “My is Jerry Renault and I’m not going to sell the chocolates,” he said to the empty apartment. The word and his voice sounded strong and noble. --Robert Cormier 1974, 177 Talks on issues concerning justice are very difficult particularly when the issues relate to the absence of justice; hence The Chocolate War by Robert Cormier is a very difficult narrative. The story is about Jerry Renault, a high school pupil in an exclusive boys’ school, who musters the courage to ‘disturb the universe’ or, simply, to defy the prevailing...
6 Pages(1500 words)Essay

...United s Chocolate Industry Market Introduction Chocolate, over the past fifty years, has become the most popular type of flavors and food types around the world and, especially, in the United States. In the US and North America, chocolate chip cookies are now very popular and common (Drowne & Patrick 22). Chocolate gifts molded into various shapes are now a traditional offering on particular holidays like valentines. It is also used to flavor various hot and cold beverages in the production of hot chocolate and chocolate milk. Cocoa mass originated in Mesoamerica as a beverage, as well as an ingredient in various foods. It played an...
7 Pages(1750 words)Research Paper

...? PESTEL Analysis for Rogers’ Chocolates PESTEL Analysis for Rogers’ Chocolates Introduction Rogers’ Chocolates was founded by Charles Rogers in 1885 in Victoria, British Columbia (BC). It was Canada’s oldest chocolate company and BC’s second oldest one. The company was owned by a private group. Five members including the past president of Rogers’ comprised the board of directors. Rogers’ sold chocolates, related specialty products and premium ice cream items. As Zietsma (2007) notes, firstly, competition was a point of concern since traditional players in the chocolate business were moving into the premium sector where Rogers’ had a...
5 Pages(1250 words)Case Study

...Chocolate For a cultural geographer, the human geography behind chocolate offers a rich field of study equivalent to diving into the beginnings anddevelopment of such other celebrated food and drink such coffee, wine or cheese. A cultural geographer or a political-economic geographer is necessarily someone who must go into the influences of place and location on the resulting human activities and social interaction. Human geography on the other hand, leads into the discovery and the revelation of patterns in political, social and economic activities and how they interact with location, distance and movement. With chocolate, the history and the habitats of ancient civilizations such as...
2 Pages(500 words)Essay

...The article d ‘Tasting Empire: Chocolate and the European Internalization of Mesoamerican Aesthetics’ written by Marcy Norton which was published in the American Historical Review explains the industrious efforts on the improvisation and value addition of indigenous chocolates. These measures by the Europeans resultantly made tastier versions of chocolates. The article serve as a narration of the evolutionary processes involved in turning the chocolates as an ever time favorite for the Europeans. It also deals with the theories allied with these processes. The author has successfully related the history of the value addition processes with the principles relating to...
4 Pages(1000 words)Essay

Analysis of The Chocolate War by Cormier Robert

..."The Chocolate War" Apathy is a of being indifferent, by suppressing emotions which may include excitement, motivation and passion. An individual who is apathetic is not interested in or not concerned about emotional, social or physical aspects of life. Therefore, when Brother Leon, the administrative head of the school asserts that the boys are infected with apathy (Cormier 147) he is right. For instance, when Jerry refuses to sell chocolates “I am not going to the meeting. I am not going to do an assignment” (Robinette 39), other students follow suit. In the book, freshmen at Trinity High School are confronted by the school gang, commonly known as The Vigils. Archie Costello heads The...
2 Pages(500 words)Book Report/Review

... "The Chocolate War" Violence is the predominant theme in the book, though not overtly portrayed. For instance,at the initial part of the book, the voices shout “Get him! Get him! Hit him! Hit him! Don’t let him get away! Don’t let him get away! Grab him! Take him down! Kill him! Bury him!” (Robinette 7). Archie is differentiated from the most notable Trinity School bullies such as Emile Janza. The quotation above clearly depicts that violence has been in the picture though in suppressed manner. However, Jerry’s refusal to sell the chocolates explodes the whole issue. Surprisingly, Jerry went against the norm of the school, by declining to accomplish the school assignment the way other students did. Those who refused to accomplish... was...
1 Pages(250 words)Essay

...Digital Chocolate Task: Digital Chocolate, a company founded in 2003 by Trip Hawkins, contributes significantly to the mobilegaming. Its headquarters is at San Mateo in California State. The man behind its establishment was also the founder of the famous Electronic Arts (EA) Company, which majorly dealt in the production of computer games (Hill and Wagonfeld 3). The onset of the phone technology triggered his innovativeness; therefore, venturing into the production of the phones supported video games. The current research discloses the company’s ability to expand to other surrounding nations. The cultural diversity, commitment, as well as the prowess depicted by its workforce, has significantly enhanced...
2 Pages(500 words)Assignment

...Chocolate Introduction Chocolates are highly consumed by people of all ages. However, its consumption is high among the youths and children. Chocolates are of different types. Normally, chocolate is brown in color although there are certain types of chocolate that could be of different colors depending on their ingredients. Chocolates are prepared from cacao seeds that are roasted and ground and later flavored. Cocoa beans of different varieties are blended to come up with a rich flavor of chocolate. Chocolate can be in different forms. They can be in liquid form, paste form or can be in block form which...
4 Pages(1000 words)Research Paper

...CHOCOLATE s Introduction Chocolate is among the few foods that many people feel passionate about. In most cases, this passion goes beyond the love for the sweetness of most candies or desserts. At body temperatures, chocolate melts that are part of its charm. Chocolate as we now recognise it, is the end product and result of many years of work and research but begins as a bean. The cocoa bean which is scientifically known as Theobroma Cacao L, originally grown in Central America, was tremendously used by the natives from the Olmec, the Maya, the Zapotec, the Moche and the Aztecs as their cultures. In modern English, chocolate originates from the Aztec...
4 Pages(1000 words)Essay
sponsored ads
Save Your Time for More Important Things
Let us write or edit the case study on your topic "The Chocolate War" with a personal 20% discount.
GRAB THE BEST PAPER

Let us find you another Case Study on topic The Chocolate War for FREE!