Comments (0)
Add to wishlistDelete from wishlist
Cite this document
Summary
This paper 'Merger of Two Competing Hospitals" focuses on the fact that hospital productivity and cost in independent hospitals versus multihospital systems are controversial issues among the health care researchers and providers. Independent hospitals perform poorly than system hospitals…
Download full paperFile format: .doc, available for editing
HIDE THIS PAPERGRAB THE BEST PAPER93.1% of users find it useful 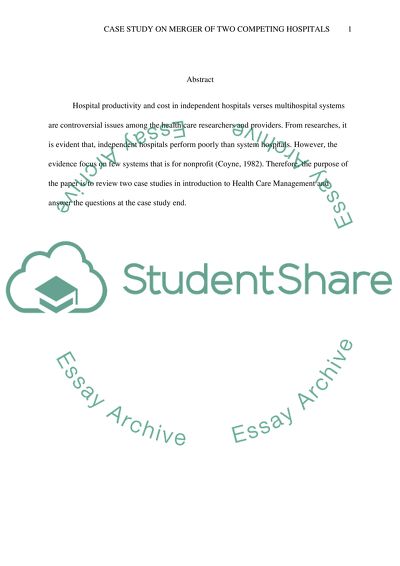 Managerial and medical benefits are realized via various means. This is such as, care comprehensiveness, quality, economics, administrative and accessibility power (Hsieh et al., 2011). Thus, the consolidation of Banner Regional Medical Center and Porter Regional Medical Center would be of advantage to the community people.
Steps needed by the Board In Order To Establish a New Executive team.

The board at foremost needs to advertise the posts for new executives. Individuals competent for the post need to email their resumes. The next step is for the board to hire a consulting firm for purposes of reviewing the resumes and performances of the applicants. Finally, the qualified applicants get the position and become part of the consolidation.
Given the embedded diversity cultures of the merged organizations, the management team needs to do the following in order to enhance the new organization working culture. Employees should be made to understand that, attacking diversity issues with powerful force is not ethical. Those who do that, think it's imperative to take strategic action. In addition to that, understanding of diversity at workforce does not trigger any changes that are major in practices of management. Therefore, for the success of the merged organizations, each and everyone should be considered in decision making. In that case, policy designing, decision making, and management procedures should not be left to corporate officers. On the contrary, all the organization shareholders should take part in the development of organization missions, objectives, rules, and regulations (Buchbinder & Shanks, 2011).

In the moments of consolidation, the companies’ physical structures should either be renovated or sold to get funds to build new and modernized facilities. The old and dilapidated facilities of Banner Regional Medical Center (BRMC) needs to be disposed to the county and the amount received from the acquisition channeled to expanding and renovating the facilities at Porter Regional Medical Centre (PRMC). This would greatly reduce expenses.
During the merging process, there exist duplication of department and services. In such a case, the organization executive needs to solve the problem with diligence. Delineation of duties should be done to avoid conflict of interests. The head of the departments should be chosen according to merit. To ensure this is adhered to, individuals interested to hold department position should apply and the best taken. There is no need to ask for people to reapply for the posts because they are necessary for the organization performance. In addition to that, a single board should be developed where members apply afresh. This would result in a single joint structure, no duplication of departments or services.

Merging process occurs with various challenges. These challenges are such as risk management and legal issues. For instance, after merging the two hospitals, the number of LPNs exceeded that of RNs by 40%. This was a great blow to the consolidation for the ratio was disproportionate. The number of registered nurses should always be larger than that of LPNs. This limitation affected the highly planned technology services that were to be offered by the consolidated organizations. The services were such as open heart, cardiovascular, cancer centers, and heart cauterization lab and call excellent centers four in number. Moreover, staff skills levels are always low and uncompetitive in the environment that is advanced technology. This means that the merging process has to offer refresher courses to the staff and acquire a number of nurses. Pertaining to legal issues, the timeline for credentialing should be moved to the shortest period possible. If that is not done, then the physicians are at risk of losing their current licenses. This automatically puts them out of compliance.

CHECK THESE SAMPLES OF Merger of Two Competing Hospitals

Merger and Acquisition in Airline Industry

Over the last two decades, there has been a profound shift in thinking about the role that people play in the success of the business, with a growing view that the management of people is a key organizational capability and one, which should be highly integrated with the strategic aims of the business. A cornerstone of this notion of International human resource management is the creation of linkage or integration between the overall strategic aims of the business and the human resource strategy and implementation. Despite new and increasing challenges, the global industry facilitates economic growth, global trade, and international tourism and continues to restructure, develop and adapt to counter them such as through mergers and...
20 Pages(5000 words)Case Study

Depending on Others: Two Differing Viewpoints Examined

Let us find you another Case Study on topic Merger of Two Competing Hospitals for FREE!