Comments (1)
Add to wishlistDelete from wishlist
Cite this document
Summary
I was working in a mental health facility that dealt with old people who mainly suffer from dementia. The incident involved an old lady who was being brought within the system with dementia but who was claiming that she "wanted to go home" throughout the whole process…
Download full paperFile format: .doc, available for editing
HIDE THIS PAPERGRAB THE BEST PAPER91.4% of users find it useful 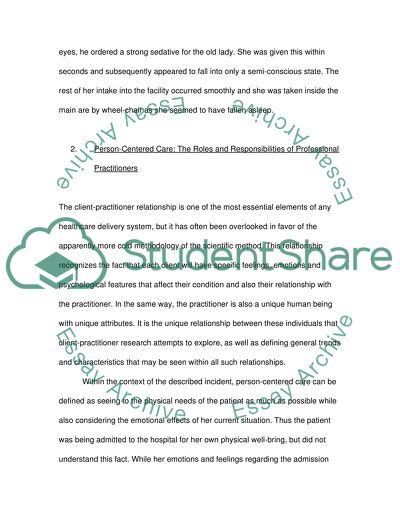 Download file to see previous pages Initially, some of the male nurses that were in the are essentially blocked her path out of the intake area by standing around her chair. Eventually this was no longer sufficient and they needed to hold her in the chair. This was done in a gentle manner, only utilizing as much force as possible to restrain her. The old lady started to struggle a lot and it seemed as though the amount of force needed to keep her in her seat would perhaps end up hurting her.
The doctor-on-call then arrived at the scene. After a few seconds being told about what had happened so far and summing up the situation with his own eyes, he ordered a strong sedative for the old lady. She was given this within seconds and subsequently appeared to fall into only a semi-conscious state. The rest of her intake into the facility occurred smoothly and she was taken inside the main are by wheel-chair as she seemed to have fallen asleep.
The client-practitioner relationship is one of the most essential elements of any healthcare delivery system, but it has often been overlooked in favor of the apparently more cold methodology of the scientific method. This relationship recognizes the fact that each client will have specific feelings, emotions and psychological features that affect their condition and also their relationship with the practitioner. In the same way, the practitioner is also a unique human being with unique attributes. It is the unique relationship between these individuals that client-practitioner research attempts to explore, as well as defining general trends and characteristics that may be seen within all such relationships.
Within the context of the described incident, person-centered care can be defined as seeing to the physical needs of the patient as much as possible while also considering the emotional effects of her current situation. Thus the patient was being admitted to the hospital for her own physical well-bring, but did not understand this fact. While her emotions and feelings regarding the admission would normally be taken into account, they could not be to the same degree as they would be with a person who understood what was occurring.
The client-practitioner relationship is an essential element of the healing process. It may range from ethical standards that a practitioner needs to follow when dealing with a patient to the effect that it will have on possible treatment and outcomes. The study of the relationship may be basically divided into two basic types: a positive approach that suggests how the relationship may help treatment outcomes, and an approach that concentrates upon negative possibilities such as emotional attachments, sexual relationships and various ethical concerns that arise within the client-practitioner relationship.
One method of both establishing and maintaining a positive client-practitioner relationship is to establish and maintain trust at the first meeting. Thus all patients should be treated with equal respect and concern, whatever the personal bias of the practitioner. A practitioner must try to treat a highly-educated, articulate and friendly patient in the same manner as the dim-witted and abusive client. A way of maintaining the relationship is to be sure that all aspects of the patient's care are kept confidential and ...Download file to see next pagesRead More
Share:
Tags
Cite this document
(“Person Centred Care Essay Example | Topics and Well Written Essays - 3250 words”, n.d.)
Person Centred Care Essay Example | Topics and Well Written Essays - 3250 words. Retrieved from https://studentshare.org/health-sciences-medicine/1528682-person-centred-care

ab
abins added comment 1 year ago
Student rated this paper as
The topic of "Person Centred Care" is quite popular among the assignments in high school. Still, this essay opens a new perspective of seeing the issue. I’ll use the manner for my own essay.

Clinical studies show that individuals who are diagnosed with mental illness usually reveals a pattern of psychological behavior which could result in either a short or long-term illness and...
11 Pages(2750 words)Term Paper

This is also the position Stone (2007) takes in the quote under discussion.
Furthermore, Stone goes on to declare that Australia has been very slow to implement this practice as compared with other countries and government agencies. One of the primary reasons is that the public policy system in Australia is quite complex and the decision-makers have not come into agreement on where to place it in the policy matrix. This leaves Interprofessional Practice and Education in the dark (or the cold) as far as strategic planning for implementation as well as placing itself within the funding cycles of the government disbursements. (Stone, 2007)
Policies are created in order to put in place how politicians and government official...
6 Pages(1500 words)Assignment
sponsored ads
Save Your Time for More Important Things
Let us write or edit the essay on your topic "Person Centred Care" with a personal 20% discount.
GRAB THE BEST PAPER

Let us find you another Essay on topic Person Centred Care for FREE!