Comments (0)
Add to wishlistDelete from wishlist
Cite this document
Summary
In a manual for nursing, which is titled, "Alzheimer’s Diseaser", the disease is described as being “progressive”, which means that symptoms worsen over time. How fast the disease progresses, and what pattern symptoms might follow, is variable by individual. 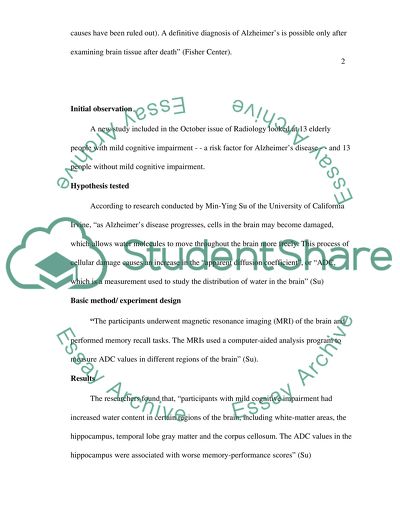 1 Alzheimer's Disease In a manual for nursing, which is d, Care of Alzheimer patients, the disease is

described as being "progressive", which means that symptoms worsen over time. How

symptoms over time, which may define as many as seven distinct stages of the disease.

There are three broad phases which are typically recognized, they are:

Confusion and memory loss, disorientation; getting lost in familiar surroundings,

problems with routine tasks, changes in personality and judgment.

"There is no single test that can accurately diagnosis the onset of Alzheimer's.

Doctors focus on ruling out all other possible "causes of symptoms", which might include

reactions to medications, other illnesses or psychological issues such as grief. A diagnosis

causes have been ruled out). A definitive diagnosis of Alzheimer's is possible only after

Irvine, "as Alzheimer's disease progresses, cells in the brain may become damaged,

which allows water molecules to move throughout the brain more freely. This process of

cellular damage causes an increase in the "apparent diffusion coefficient", or "ADC,

"The participants underwent magnetic resonance imaging (MRI) of the brain and

measure ADC values in different regions of the brain" (Su).

The researchers found that, "participants with mild cognitive impairment had

increased water content in certain regions of the brain, including white-matter areas, the

hippocampus, temporal lobe gray matter and the corpus cellosum. The ADC values in the

Min-Ying Su in assessing the results of their research, said, "our methods may

The current process for diagnosis can be stressful, time consuming and expensive

for the aging patient. The fact that Alzheimer's disease affects the brain has previously

strategies for treating the disease.


Fisher Center for Alzheimer's Research Center, Accessed on line on September 30, 2006, from www.alzninfo.org

CHECK THESE SAMPLES OF Alzheimers Disease

...? Alzheimer’s Disease First Middle initial and of Prof. First and of lecturer February 23, Abstract Alzheimer’s is a progressive and irreversible neurological disease of the brain that results in loss of memory. It is known to impede intellectual and reasoning skills and cause changes in personality and behavior thereby affecting daily life and activities. It is estimated that nearly 5.3 million people living in the United States of America suffer from Alzheimer’s (Fisher Center for Alzheimer’s Research Foundation, n.d.a). This disease is mostly known to affect people over 60 years and is substantially burdensome to those affected, their caregivers, and society in general. The exact cause of Alzheimer’s is still unknown. However...
8 Pages(2000 words)Research Paper

...Health Assessment Running head: 1HEALTH ASSESSMENT: ALZHEIMER'S DISEASE Health Assessment: ALZHEIMER'S DISEASE In APA Style (UNIVERSITY) Health Assessment 2 Alzheimer's Disease (AD) is the most common form of dementia among older people (National Institute on Aging, 2008). It is a serious condition which affects the simple brain functions such as memory by those affected by it. It is estimated that approximately 5 million Americans are affected by this disease and is the sixth leading cause of death in the United States (Alzheimer's Association, 2008). It is estimated that the annual total cost of caring for a single AD patient in an advanced stage of the diseases is greater than $50,000 (Fauci et.al, 2008...
3 Pages(750 words)Assignment

...Alzheimer’s Disease Alzheimer’s disease is a form of dementia in elderly people and is a progressive and irreversible brain disorder that hinders with the patient’s capability to perform his every day chores and maintain social life. Diagnosis To diagnose Alzheimer’s disease, the patient’s past medical history must be recorded; a mini-mental exam must be taken; a detailed physical exam should be conducted that includes chest X-ray, blood tests, urinalysis, CT scan, Magnetic Resonance Imaging, Electroencephalography, Electrocardiogram, Neuropsychological Testing, and Positron Emission Tomography (PET) Scan. All these tests would lead to exact diagnosis. Subjective Findings Stage 1 has symptoms like losing way, asking something repeatedly...
2 Pages(500 words)Essay

...﻿ Alzheimer’s disease is “a disease characterized by a progressive loss of mental functioning, caused by a degeneration of brain cells.” (Inset& Roth, 2008, p.353) It is unclear what causes the disease and there is no known cure. While it commonly occurs within the elderly population approximately 10% of cases seem to be genetically inherited. (Insel & Roth) It may not be necessary to undergo genetic testing for Alzheimer’s disease. Genetic testing is often done to determine the likelihood of inheriting and passing on inherited diseases. Everyone usually carries two copies of certain genes: one from each parent. Genetic testing identifies changes in these genes to determine risk. (“Genetic testing”n.d.) For example genetic...
4 Pages(1000 words)Assignment

...Alzheimer’s disease Alzheimer’s disease Information about Alzheimer’s disease can be obtained from some websites, which include Google, library.fiu.edu, and lib.berkeley.edu/TeachingLib/Guides/Internet/FindInfo. The information provided by Google regarding this topic is wide and from various sources, which includes primary and secondary sources (Hebda & Czar, 2009). However, there is also some unverified information found on this site regarding the topic, which cannot be relied upon entirely. On the other hand, lib.berkeley.edu provides verified information about the topic mostly in form of primary sources, specialized directories, databases and statistics (Englebardt & Nelson, 2002). Library.fiu.edu is the other website that has...
1 Pages(250 words)Assignment

Disease and Genetic Disorder for the Human Body Systems

...Diseases Cardiovascular diseases involve the heart and the blood vessels. Myocardial infarction Myocardial infarction generally known as Heart Attack is a cardiovascular disease occurs when the coronary arteries, which supply blood to the heart, are blocked. This is the number one cause of death in developed countries. The blockage short supplies blood to the heart causing the death of the part of the heart tissue and can be fatal if not treated immediately. Major reasons for the blockage are blood clots and lipid deposits. The most common symptom are chest pain and tightness often radiates to left arm. Aspirin and heparin are given immediately as anticoagulants to inhibit further blood clots. Electrocardiography and angiography...
6 Pages(1500 words)Essay

The prevalence of increased antibiotic resistance of bacterial agents of disease is a serious clinical concern because it limits and reduces the efficiency of the treatment options that are available. The mechanism of the development of antibiotic resistance has been attributed to bacteria’s capacity to mutate. The mutation alters existing resistance determinants to antimicrobial agents and produces different drug targets that have decreased antibiotic affinity. Thus, mutators that have high mutation frequencies could have important roles in developing antibiotic resistance (Chopra, O’Neill, & Miller, 2003). It is believed that bacteria mutate as part of its endogenous survival mechanism. In E. coli, defects in gen...
7 Pages(1750 words)Research Proposal

Heart Disease as One of the Leading Causes of Mortality

...Critically analyse whether there is any short term and/or long term benefit in running an exercise referral scheme to modify risk factors for heart disease Introduction: Heart disease is one of the leading causes of morbidity and mortality among the developed countries. Atheromatous disease of coronary arteries is the most important single cause of death in the western world and Atheroma is the commonest cause of angina pectoris leading to myocardial infarction and its complications. The risk factors in aetiology of heart disease are complex and much of its understanding is based on epidemiological evidence. It has been seen that geographical difference between countries in the manifestation of all aspects of heart disease is evident...
9 Pages(2250 words)Essay

Something Learned Within the Last Year That I Now Know A Lot About: Alzheimer's Disease

...Alzheimers Disease Table of Contents I. Research 3 A. Background 3 B. Symptoms and Signs 4 C. Treatment Options, New Research 5 II. Importance, How ICame to Learn About the Disease 7 III. Reflection 10 References 13 I. Research A. Background Alzheimers Disease is a brain degeneration condition, where the progression is gradual but whose symptoms become evident on the sixth decade in the life of a person, and which is characterized by the slow erosion of the thinking capacities and memory capacities of the person, to the point of total loss of ability to perform the most fundamental bodily tasks. In the elderly, the most prevalent form of dementia is Alzheimers. As a generalization of the condition of Alzheimers, the umbrella...
10 Pages(2500 words)Term Paper

The Effect of Diphtheria Disease on Mice

...EFFECTS OF DIPHTHERIA DISEASE (RESEARCH PROPOSAL) This research proposal advocates for a comprehensive evaluation of the effects of the Diphtheria disease on mice, and the variations of the bacterial aspects when compared to human effects. The Diphtheria disease is a leading cause of death in most countries and has many complications such as the growth of thick membranes on the respiratory tract causing difficulties in swallowing and breathing (WHO 2010). Through the evaluation the disease’s effects on mice, there are possibilities of finding weak points of the bacteria and absolute ways of preventing the disease through a better vaccination program or a way to counter it. The core method to use for the extraction of information is through...
7 Pages(1750 words)Research Proposal

Let us find you another Essay on topic Alzheimers Disease for FREE!