Comments (0)
Add to wishlistDelete from wishlist
Cite this document
Summary
Milo is a 23 year old who has a pattern of getting in trouble with the law. According to the DSM-IV, I would diagnose him as 301.7 Antisocial Personality Disorder. Although he is 23 now, by the age of 15 he was already in trouble with the law. The criterion for this disorder is:
…
Download full paperFile format: .doc, available for editing
HIDE THIS PAPERGRAB THE BEST PAPER92.6% of users find it useful 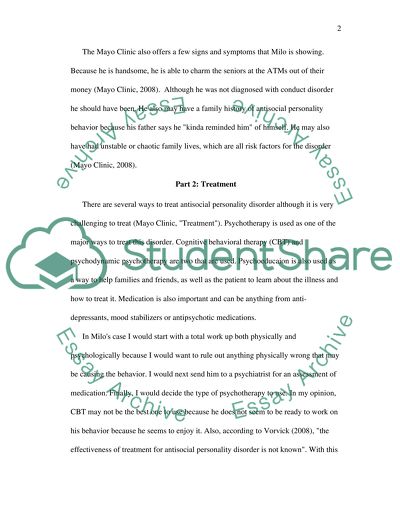 Case Study 7: Milo Tark Part Diagnosis Milo is a 23 year old who has a pattern of getting in trouble with the law. According to the DSM-IV, I would diagnose him as 301.7 Antisocial Personality Disorder. Although he is 23 now, by the age of 15 he was already in trouble with the law. The criterion for this disorder is:
A. There is a pervasive pattern of disregard for and violation of the rights of others occurring since the age of 15' Milo had picked several fights when he was younger and by the time he was 15, he was engaging in petty theft and finally stole a car at 15 (criteria 1). He is irritable and aggressive, as indicated by his fights and assaults (criteria 4). It could be argued that he has a disregard for the safety of himself and others because of the fighting, and because he cons money from older people at ATMs (criteria 5). He also has had difficulty keeping a job (criteria 6) as indicated by his "15 jobs" with none lasting more than six months. Finally, Milo has a lack of remorse for getting the 16 year old pregnant and for embarrassing his mother (criteria 7).
B. Milo is at least 18 (he is 24).
C. There is evidence of Conduct Disorder although it was not diagnosed when he was younger, it was apparent as representative of his fights and difficulties with the law.
D. He does not seem to have Schizophrenia or be involved in a Manic Episode (DSM-IV, 1994, p. 649-650).
The Mayo Clinic also offers a few signs and symptoms that Milo is showing. Because he is handsome, he is able to charm the seniors at the ATMs out of their money (Mayo Clinic, 2008). Although he was not diagnosed with conduct disorder he should have been. He also may have a family history of antisocial personality behavior because his father says he "kinda reminded him" of himself. He may also have had unstable or chaotic family lives, which are all risk factors for the disorder (Mayo Clinic, 2008).
Part 2: Treatment
There are several ways to treat antisocial personality disorder although it is very challenging to treat (Mayo Clinic, "Treatment"). Psychotherapy is used as one of the major ways to treat this disorder. Cognitive behavioral therapy (CBT) and psychodynamic psychotherapy are two that are used. Psychoeducaion is also used as a way to help families and friends, as well as the patient to learn about the illness and how to treat it. Medication is also important and can be anything from anti-depressants, mood stabilizers or antipsychotic medications.
In Milo's case I would start with a total work up both physically and psychologically because I would want to rule out anything physically wrong that may be causing the behavior. I would next send him to a psychiatrist for an assessment of medication. Finally, I would decide the type of psychotherapy to use. In my opinion, CBT may not be the best one to use because he does not seem to be ready to work on his behavior because he seems to enjoy it. Also, according to Vorvick (2008), "the effectiveness of treatment for antisocial personality disorder is not known". With this information in mind, I would be reluctant to start work with him if he did not appear ready to start treatment.
References
American Psychological Association. (1994). Diagnostic and statistical manual of mental disorders (DSM-IV). Fourth edition. Washington, DC: American Psychological Association.
Mayo Clinic Staff. (2008). Symptoms antisocial personality disorder. Mayo Clinic. Retrieved December 2, 2009 from http://www.mayoclinic.com/health/
Antisocial-personality-disorder-DS00829/DSECTION=symptoms.
Vorvick, L. (2008). Antisocial personality disorder. Medline Plus. Retrieved December 3, 2009 from http://www.nlm.nih.gov/medlineplus/ency/article/000921.htm. Read More
Share:
Tags
Cite this document
(“Antisocial Personality Disorder Case Study Example | Topics and Well Written Essays - 500 words”, n.d.)
Retrieved from https://studentshare.org/health-sciences-medicine/1520422-antisocial-personality-disorder

...?Personality Disorder Module Module ID: The Paper: The present study aims to make a critical analysis of chapter 12 “Psychology of Personality” extracted from “Introduction to Psychology, Gateways to Mind and Behavior” by Coon & Mitterer (2012). Main objective behind examining the chapter is to estimate the term personality and the theories and researches attributed to it. The authors declare an individual’s long term pattern or consistency in thinking, emotions and behavior as his personality (404), in the light of which people interact with him while entering into interaction with him; one’s being sociable, meek, aggressive and greedy come under the...
5 Pages(1250 words)Essay

...? Personality Disorder Insert college level: Multiple personality disorder Personalities Disorder is detected when an individual has multiple personalities that can control the person and make them do actions they don’t recall or would be unable to do. These people cannot know when one personality is influencing them or may not be conscious of what they are doing (Sandra, 1992). The disorder is mostly caused by child sexual abuse when so severe that the child does not remember the events and therefore develops another personality to recall hat happened....
3 Pages(750 words)Essay

...﻿Antisocial Personality Disorder Dr. Gregory House was born on the 11th of June 1958 from a relationship between Blythe house, his mother, and an unknown male. His mother was a house-wife married to a marine pilot, John House, who was not present when House was conceived being on overseas active duty. His mother also had an affair with another man, Thomas Bell, who House mistook for his father because of the physical characteristics that they shared. House’s father was on active duty throughout most of his adolescence and childhood stages, and he, therefore, lived in various countries that his father was stationed including Egypt, Japan, the Philippines, and Japan. As a result, he...
4 Pages(1000 words)Case Study

Relationship of the Sexes in Greys Anatomy

...? of the of the of the Antisocial Personality Disorder Antisocial personality disorder de s acondition that affects the emotions, behavior, and thoughts of an individual. The term antisocial indicates conduct that in addition to being disruptive could be harmful to others (National Institute for Health and Care Excellence). Scientists had found that this was a condition that was characteristic of countless convicted criminals. Individuals afflicted with this disorder tend to disregard distinctions between right and wrong. Quite frequently, such persons infringe upon the rights of others...
4 Pages(1000 words)Research Paper

...Running Head Gender Differences in Antisocial Personality Disorder Gender Differences in Antisocial Personality Disorder In recent literature,researchers underline that multiple and antisocial personality disorder is real but that it rarely occurs spontaneously, without prompting, and therefore does not deserve to be a primary-level diagnosis. A special attention is given to gender differences and behavior patterns of patients and possible treatment methods. There is a small but well-recognized group of adults with mild learning disability, predominantly but not exclusively male, who come...
6 Pages(1500 words)Essay

...Response: Adult Antisocial Personality Disorder Although the three terms adult antisocial personality disorder (APD), psychopathy, and sociopathy carry a similar meaning, I think that there is a difference between the terms. APD is marked by refusal of a person to follow societal norms and incorrigible behaviour, while psychopathy is a term used to describe an individual whose antisocial behaviours are a result of an internal “defect.” On the other hand, “sociopath” applies to individuals whose antisocial behaviours are a direct result of familial or environmental causes. I think the...
1 Pages(250 words)Assignment

...Antisocial Personality Disorder al Affiliation) Introduction Antisocial Personality Disorder is a human condition that disregards the violation of other people beginning in childhood and set to continue until one becomes above 18 years of age. The condition is characterized through manipulation and the treatment of the condition has to start when a person becomes an adult and when he experiences conduct disorder before attaining 15 years” (McCallum, 2001). Its diagnosis begin when the victim is insisting and distressing. APD should not undergo diagnosis if the symptoms happen during the bipolar...
5 Pages(1250 words)Research Paper
sponsored ads
Save Your Time for More Important Things
Let us write or edit the case study on your topic "Antisocial Personality Disorder" with a personal 20% discount.
GRAB THE BEST PAPER

Let us find you another Case Study on topic Antisocial Personality Disorder for FREE!