Comments (0)
Add to wishlistDelete from wishlist
Cite this document
Summary
This paper "Healthcare Services Industry - the Process of Caring For the Patient" focuses on the primary duty of all healthcare professionals. However, the process of caring for the patient is highly dependent on the individual case. Caring is a continuous learning process for experts.  …
Download full paperFile format: .doc, available for editing
HIDE THIS PAPERGRAB THE BEST PAPER92.8% of users find it useful 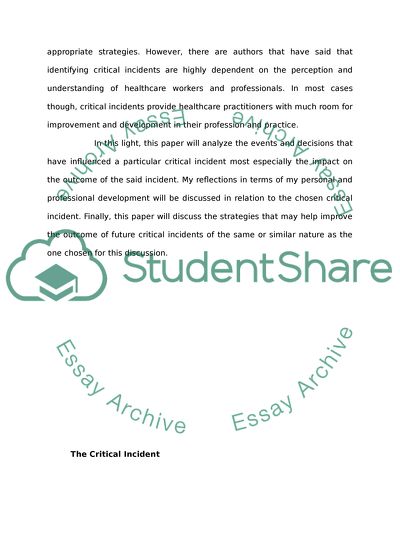 Download file to see previous pages Each of such factors contributes to how the incident turns out to be.
In this paper, a particular critical incident will be analyzed. Critical incidents are defined in relation to the setting or area under consideration because critical incidents occur in various fields and industries. In this paper, the definition of a critical incident in the healthcare setting will be utilized. According to Rolf et al (2001), the term 'critical incident' has come to be associated with a 'life-threatening or dramatic event" Moreover, a critical incident in such setting may be characterized as "one which led or could have led to harm if it had been allowed to progress." (Rollins, 2001) Other writers have attempted to define critical incidents. However, the most common notion that is shared by most authors is that a critical incident may cause harm to patients if health care practitioners fail to employ the appropriate strategies. However, there are authors that have said that identifying critical incidents are highly dependent on the perception and understanding of healthcare workers and professionals. In most cases though, critical incidents provide healthcare practitioners with much room for improvement and development in their profession and practice.
In the In this light, this paper will analyze the events and decisions that have influenced a particular critical incident most especially the impact on the outcome of the said incident. My reflections in terms of my personal and professional development will be discussed in relation to the chosen critical incident. Finally, this paper will discuss the strategies that may help improve the outcome of future critical incidents of the same or similar nature as the one chosen for this discussion.
I would like to analyze an incident that happened when I was a medical student carrying out my role as a student Operating Department Practitioner (ODP) under a Registered Operating Department Practitioner (RODP). I was on placement in the anaesthetic room within a local NHS trust and in order to comply with the rules of confidentiality, in accordance with the Association of Operating Department Practitioners (AODP), Student Code of Conduct (2005), the patient, if named, will be done so under a pseudonym and only for the purposes of this assignment.
Prior to the commencement of the operating list, I prepared and checked all of the equipment required for the first case including the anaesthetic machine. The anaesthetic machine was checked following a printed checklist and was dually signed by myself and countersigned by the RODP in accordance with Trust policy. It is also a mandatory requirement of the Association of Anaesthetists of Great Britain and Ireland (AAGBI), that the anaesthetic equipment must be checked in accordance with their recommendations (Association of Anaesthetists of Great Britain and Ireland, 2004).
Between checking the anaesthetic machine and the commencement of the list, there was to be a delay due to some confusion as to whether the list would go ahead as the paediatric anaesthetic consultant for this case was no longer available. In the meantime, the RODP and I were reassigned to assist with the list in another department. On returning to the operating department (approximately one hour later), we were informed that the list was going ahead as a suitably qualified replacement anaesthetist had been found and that the first patient had been sent for.     ...Download file to see next pagesRead More
Share:
Tags
Cite this document
(“Healthcare Services Industry - the Process of Caring For the Patient Assignment”, n.d.)
Healthcare Services Industry - the Process of Caring For the Patient Assignment. Retrieved from https://studentshare.org/health-sciences-medicine/1505707-healthcare-services-industry

“Healthcare Services Industry - the Process of Caring For the Patient Assignment”, n.d. https://studentshare.org/health-sciences-medicine/1505707-healthcare-services-industry.
Comments (0)
Click to create a comment or rate a document

Let us find you another Assignment on topic Healthcare Services Industry - the Process of Caring For the Patient for FREE!