Comments (0)
Add to wishlistDelete from wishlist
Cite this document
Summary
“Critically evaluate current approaches to the management of a chosen neurological problem or a specific intervention” Introduction Brain trauma can bring about significantly unfavourable health issues for affected patients. The brain controls majority of our neurological functions and responses; and it helps ensure that the organ and system functions are within normal parameters…
Download full paperFile format: .doc, available for editing
HIDE THIS PAPERGRAB THE BEST PAPER92.7% of users find it useful 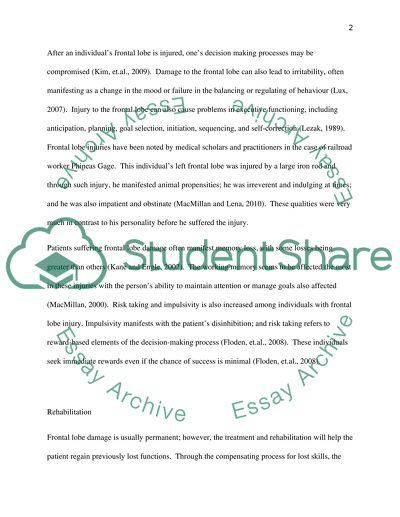 Download file to see previous pages It shall discuss the challenges of delivering a holistic approach in the rehabilitation of motor skills following a frontal lobe injury. It will also discuss the impact and pathophysiological elements relating to frontal lobe injuries. The rehabilitative process will also be presented, followed by a discussion of the challenges faced in frontal lobe problems. Finally, this essay will present possible recommendations for better rehabilitative processes for affected patients. Body Anatomy of the brain The frontal lobe of the brain generally represents a large mass and area (Lux, 2007). It comprises the cerebral system of the brain, which mostly provides a structure for goal-directed activities and behaviour (Badre and D’Esposito, 2009). It is often considered as the part of the brain which manages decision-making and which determines the impact of various actions. As it is found at the anterior part of the brain, it is also vulnerable to various injuries and trauma. After an individual’s frontal lobe is injured, one’s decision making processes may be compromised (Kim, et.al., 2009). Damage to the frontal lobe can also lead to irritability, often manifesting as a change in the mood or failure in the balancing or regulating of behaviour (Lux, 2007). Injury to the frontal lobe can also cause problems in executive functioning, including anticipation, planning, goal selection, initiation, sequencing, and self-correction (Lezak, 1989). Frontal lobe injuries have been noted by medical scholars and practitioners in the case of railroad worker Phineas Gage. This individual’s left frontal lobe was injured by a large iron rod and through such injury, he manifested animal propensities; he was irreverent and indulging at times; and he was also impatient and obstinate (MacMillan and Lena, 2010). These qualities were very much in contrast to his personality before he suffered the injury. Patients suffering frontal lobe damage often manifest memory loss, with some losses being greater than others (Kane and Engle, 2002). The working memory seems to be affected the most in these injuries with the person’s ability to maintain attention or manage goals also affected (MacMillan, 2000). Risk taking and impulsivity is also increased among individuals with frontal lobe injury. Impulsivity manifests with the patient’s disinhibition; and risk taking refers to reward-based elements of the decision-making process (Floden, et.al., 2008). These individuals seek immediate rewards even if the chance of success is minimal (Floden, et.al., 2008). Rehabilitation Frontal lobe damage is usually permanent; however, the treatment and rehabilitation will help the patient regain previously lost functions. Through the compensating process for lost skills, the goals of rehabilitation and recovery can be secured (Purves, 2008). The focus for rehabilitation would be on assisting the patient in the regulation of his emotions and in controlling his impulsive and risk-taking behaviour (Purves, 2008) Traumatic frontal brain injury requires special attention. Various studies have sought to evaluate these patients in relation to outcome. Estimates indicate that about 15% of mild trauma patients experience post-concussive symptoms within a year following their injury (Alexander, 1997). Minor neuropsychological problems may not be noticed and may only be more ...Download file to see next pagesRead More
Share:
Tags
Cite this document
(“The challenges of delivering a holistic approach to rehabilitating Essay”, n.d.)
The challenges of delivering a holistic approach to rehabilitating Essay. Retrieved from https://studentshare.org/health-sciences-medicine/1477247-the-challenges-of-delivering-a-holistic-approach
(The Challenges of Delivering a Holistic Approach to Rehabilitating Essay)
The Challenges of Delivering a Holistic Approach to Rehabilitating Essay. https://studentshare.org/health-sciences-medicine/1477247-the-challenges-of-delivering-a-holistic-approach.
“The Challenges of Delivering a Holistic Approach to Rehabilitating Essay”, n.d. https://studentshare.org/health-sciences-medicine/1477247-the-challenges-of-delivering-a-holistic-approach.
Comments (0)
Click to create a comment or rate a document

The end of the Cold War and the events of 9/11 have provided a catalyst for unprecedented challenges to the international order and national security policy. Arguably the most important challenge has been the appropriate and most efficacious method to combat a transient and intangible enemy, which transcends borders and the conventional notion of an organized army that “yet has shown remarkable resilience against traditional military firepower”. Mahmood’s observations highlight the changin...
7 Pages(1750 words)Article
sponsored ads
Save Your Time for More Important Things
Let us write or edit the essay on your topic "The challenges of delivering a holistic approach to rehabilitating motor skills following a frontal lobe injury" with a personal 20% discount.
GRAB THE BEST PAPER

Let us find you another Essay on topic The challenges of delivering a holistic approach to rehabilitating motor skills following a frontal lobe injury for FREE!