Comments (0)
Add to wishlistDelete from wishlist
Cite this document
Summary
Question 1 According to Mick Sanders (2011, p. 491), history taking refers to details gathered during the interview with a patient. It provides information such as medical and social aspects of a patient’s life. It also has information on environmental factors which may have impacts on his condition…
Download full paperFile format: .doc, available for editing
HIDE THIS PAPERGRAB THE BEST PAPER95.4% of users find it useful 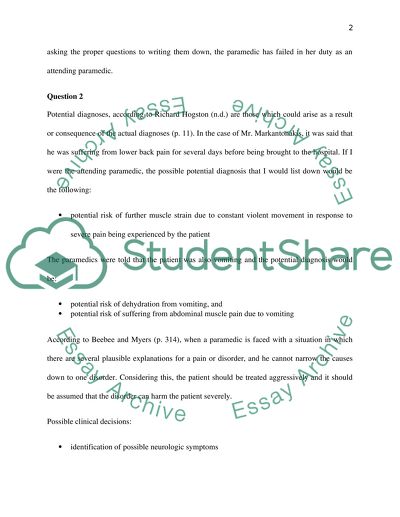 Download file to see previous pages He further stated that if a paramedic has a good questioning skill, further history may become available. In the case of Mr. Markantonakis, the paramedic on duty did not fully exercise proper history taking. Thorough questioning of the patient’s wife and daughter should have been done in order to be fully informed about the patient’s behaviour prior to their coming. If the patient’s wife and daughter would be believed, the paramedics did not come across as caring and professional, not introducing themselves and making sure to do anything to gain the patient’s trust. Obtaining facts about when the pain started, the severity, the medications taken and the patient’s medical history was done unprofessionally. The paramedic only learned of some of them because the patient’s family volunteered the information. With regards to assessment, like what she did in history taking, the paramedic was unprofessional. Questions such as “What provokes or relieves the pain?” Is it constant, colicky, sharp or heavy?”; “Any radiation from site?” (Harris, p. 10) and other such questions were not asked and thus, her overall impression is not credible. The paramedic based her decisions and advice only on what she has seen, and not on pertinent information that she should have obtained in the first place. From asking the proper questions to writing them down, the paramedic has failed in her duty as an attending paramedic. Question 2 Potential diagnoses, according to Richard Hogston (n.d.) are those which could arise as a result or consequence of the actual diagnoses (p. 11). In the case of Mr. Markantonakis, it was said that he was suffering from lower back pain for several days before being brought to the hospital. If I were the attending paramedic, the possible potential diagnosis that I would list down would be the following: potential risk of further muscle strain due to constant violent movement in response to severe pain being experienced by the patient The paramedics were told that the patient was also vomiting and the potential diagnosis would be: potential risk of dehydration from vomiting, and potential risk of suffering from abdominal muscle pain due to vomiting According to Beebee and Myers (p. 314), when a paramedic is faced with a situation in which there are several plausible explanations for a pain or disorder, and he cannot narrow the causes down to one disorder. Considering this, the patient should be treated aggressively and it should be assumed that the disorder can harm the patient severely. Possible clinical decisions: identification of possible neurologic symptoms with the knowledge that the patient has already taken medication and still suffers from the pain, hospitalization will be recommended take into consideration all possible scenarios and causes of the pain blood chemistry testing electro cardiogram (ECG) test continuous monitoring of patient’s vital signs such as blood pressure, respiration, heart rate and pulse Question 3 Chrisuola stated that the paramedic was “rude” (Finding of Inquest, 3.6). This shows that the paramedic was unprofessional with regards to communicating with a patient and his family. My strategies and communication methods would be: Establish a professional demeanour greet patient by name and shake hands be sensitive and courteous ensure patient safety and comfort inquire about feelings watch for signs of uneasiness ask direct, open-ended ...Download file to see next pagesRead More
Share:
Tags
Cite this document
(“Assessment - Short Annswer Questions Module 2 Essay”, n.d.)
Assessment - Short Annswer Questions Module 2 Essay. Retrieved from https://studentshare.org/health-sciences-medicine/1471582-assessment-short-annswer-questions-module
(Assessment - Short Annswer Questions Module 2 Essay)
Assessment - Short Annswer Questions Module 2 Essay. https://studentshare.org/health-sciences-medicine/1471582-assessment-short-annswer-questions-module.
“Assessment - Short Annswer Questions Module 2 Essay”, n.d. https://studentshare.org/health-sciences-medicine/1471582-assessment-short-annswer-questions-module.
Comments (0)
Click to create a comment or rate a document

The assessment also indicated that second to collaborating attitude, I also tend to compromise just to be at peace with the conflict arising and be over it after knowing I had done everything I am supposed to do.

The results of the assessment did not surprise me a bit. And I should say I couldn’t agree more. When presented with random situations that may arise in conflicting ideas or viewpoints, I can say that I am the type of person who approaches issues emphasizing systematic approaches. I usually hear both sides of the discussion and evaluate the issue before I make my own judgment. I am not easily swayed with other people’s opinions even when a lot of them think in the opposite way that I do. When making...
7 Pages(1750 words)Essay
sponsored ads
Save Your Time for More Important Things
Let us write or edit the essay on your topic "Assessment - Short Annswer Questions Module 2" with a personal 20% discount.
GRAB THE BEST PAPER

Let us find you another Essay on topic Assessment - Short Annswer Questions Module 2 for FREE!