Comments (0)
Add to wishlistDelete from wishlist
Cite this document
Summary
This essay presents the psychological factors of eating disorders which have become a big issue over the past few decades. Much of this has to do with movies, advertisements and what is considered socially acceptable as regards what the Western culture thinks women should look like. …
Download full paperFile format: .doc, available for editing
HIDE THIS PAPERGRAB THE BEST PAPER95.8% of users find it useful 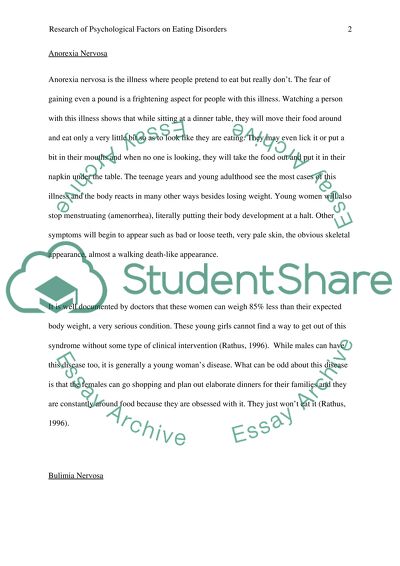 Download file to see previous pages From this discussion it is clear that , the aspect of dating comes in the teenage years and wanting to look as pretty as any model or film actress is important in their minds to get the boys to ask them out. With all these pressures from the media and even from friends and family members, young girls in particular, will suffer as they try to achieve the perfection that everyone seems to want from them. This then can lead to eating disorders such as anorexia nervosa and bulimia nervosa.
This paper highlights that anorexia nervosa is the illness where people pretend to eat but really don’t. The fear of gaining even a pound is a frightening aspect for people with this illness. Watching a person with this illness shows that while sitting at a dinner table, they will move their food around and eat only a very little bit so as to look like they are eating. They may even lick it or put a bit in their mouths and when no one is looking, they will take the food out and put it in their napkin under the table. The teenage years and young adulthood see the most cases of this illness and the body reacts in many other ways besides losing weight. Young women will also stop menstruating (amenorrhea), literally putting their body development at a halt. Other symptoms will begin to appear such as bad or loose teeth, very pale skin, the obvious skeletal appearance, almost a walking death-like appearance.
It is well documented by doctors that these women can weigh 85% less than their expected body weight, a very serious condition. These young girls cannot find a way to get out of this syndrome without some type of clinical intervention (Rathus, 1996). While males can have this disease too, it is generally a young woman’s disease. What can be odd about this disease is that the females can go shopping and plan out elaborate dinners for their families and they are constantly around food because they are obsessed with it. They just won’t eat it (Rathus, 1996).
Bulimia Nervosa
This is a disease which is quite the opposite although the goal is the same – to be thin. In the case of bulimia, young girls will eat food and then eat some more food a short time later, a binge effect where they will eat quite a bit. Then at a certain point, girls will go off into the bathroom, turn on a shower if at home, and proceed to throw it all up. Adult women are also more prone to this disease in an effort to lose weight. It is also common in families, that mothers who are unhappy with family situations, also conduct in this behavior, perhaps as a method of gaining control over some part of her. She may also promote this on her daughter if she feels her daughter is too fat and should lose weight. Misguided conceptions about what women should look like have destroyed families, almost irreparably. It is more about the looks and appearances than the love in the family (Rathus, 1996).
Mind over Matter
The mind is even now still an unknown frontier in what we really know about what it can do. Certainly, the mind can be trained to observe factors or events in one way or another, from one person’s view to the next person’s different point of view. The ventromedial hypothalamus (VHM) is the area of the brain where hunger is regulated for the body. ...Download file to see next pagesRead More
Share:
Tags
Cite this document
(“Psychological Factors on Eating Disorders Research Paper”, n.d.)
Psychological Factors on Eating Disorders Research Paper. Retrieved from https://studentshare.org/health-sciences-medicine/1458875-psychological-factors-on-eating-disorders

CHECK THESE SAMPLES OF Psychological Factors on Eating Disorders

With the help of this strategy, it can survive and grow on the skin, mucosal surfaces and...
10 Pages(2500 words)Case Study

...1. Assess the key macro factors that have influenced the UK grocery retailing industry since the early 1960s. The concept of organisational change is inherently intertwined with external threats and opportunities, which businesses must adapt to as part of strategic planning to continue long term growth. Senior and Fleming argue that the concept of organisational change has many faces, namely “convergent changes and transformational change that is organisation wide and characterised by radical shifts in strategy, mission values and associated changes of structures and systems” (In Thompson & Martin, 2005, p.41). Moreover, Johnson et al highlight that external macro-economic factors intrinsically impact strategy management and without...
13 Pages(3250 words)Assignment
sponsored ads
Save Your Time for More Important Things
Let us write or edit the research paper on your topic "Psychological Factors on Eating Disorders" with a personal 20% discount.
GRAB THE BEST PAPER

Let us find you another Research Paper on topic Psychological Factors on Eating Disorders for FREE!