Comments (0)
Add to wishlistDelete from wishlist
Cite this document
Summary
The present assignment "Obesity in Children" is focused on the problem of obesity which affects children. As the author of the text puts it, chubbiness in children may be synonymous with cuteness but certainly, it cannot be equated with good health. …
Download full paperFile format: .doc, available for editing
HIDE THIS PAPERGRAB THE BEST PAPER96.7% of users find it useful 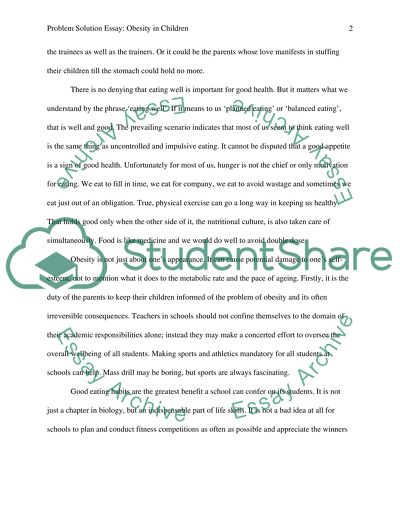 Extract of sample "Obesity in Children"

﻿Problem Solution Essay
Obesity in Children
When I look around, it is saddening to see most shapes being round. The cause of apprehension is that the shapes refer to people and not to objects. It must be all the more worrying when those people are under the age of fifteen, all of them apparently the members of the gluttonous Augustus Gloop (of ‘Charlie and the Chocolate Factory’) tribe. Chubbiness in children may be synonymous with cuteness but certainly it cannot be equated with good health. Today we are living in a world where fitness is the buzzword and yoga trainers earn more than software engineers. By health, we do not just mean the absence of disease. It is a comprehensive term that encompasses physical, mental, social and spiritual wellbeing. Since community is nothing but a group of individuals, it becomes obvious that the wellbeing of the community is a function of the fitness of the individuals that constitute the group. Viewed in this way, obesity becomes a problem not of individuals but of the community as a whole and it is imperative that every one of us realizes this. In the process of schooling, the focus right now is on imparting linguistic skills, reasoning skills, financial skills and soft skills. I wish it focused just as much on ‘food skills’.
Not that education has entirely ignored this aspect. We do have the ingredient called physical education in all schools. The irony is that the problem of obesity persists alongside. Probably physical education goes on like a ritual. Or it is not taken as seriously as it should be by the trainees as well as the trainers. Or it could be the parents whose love manifests in stuffing their children till the stomach could hold no more.
There is no denying that eating well is important for good health. But it matters what we understand by the phrase ‘eating well’. If it means to us ‘planned eating’ or ‘balanced eating’, that is well and good. The prevailing scenario indicates that most of us seem to think eating well is the same thing as uncontrolled and impulsive eating. It cannot be disputed that a good appetite is a sign of good health. Unfortunately for most of us, hunger is not the chief or only motivation for eating. We eat to fill in time, we eat for company, we eat to avoid wastage and sometimes we eat just out of an obligation. True, physical exercise can go a long way in keeping us healthy. That holds good only when the other side of it, the nutritional culture, is also taken care of simultaneously. Food is like medicine and we would do well to avoid double dose.
Obesity is not just about one’s appearance. It can cause potential damage to one’s self-esteem, not to mention what it does to the metabolic rate and the pace of ageing. Firstly, it is the duty of the parents to keep their children informed of the problem of obesity and its often irreversible consequences. Teachers in schools should not confine themselves to the domain of their academic responsibilities alone; instead they may make a concerted effort to oversee the overall wellbeing of all students. Making sports and athletics mandatory for all students at schools can help. Mass drill may be boring, but sports are always fascinating.
Good eating habits are the greatest benefit a school can confer on its students. It is not just a chapter in biology, but an indispensable part of life skills. It is not a bad idea at all for schools to plan and conduct fitness competitions as often as possible and appreciate the winners loudly and publicly so that they become examples worth-emulating for others. After all, example is better than precept. Read More
Share:
Tags
Cite this document
(“Obesity in Children Assignment Example | Topics and Well Written Essays - 500 words”, n.d.)
Retrieved from https://studentshare.org/health-sciences-medicine/1422647-problem-solving-essay

CHECK THESE SAMPLES OF Obesity in Children

The decentralized form of the homeschooling populace limits the ability of researchers to outline conclusions on the precise effect of homeschooling on diverse outcome measures like an academic achievement (Ray). Nevertheless, assessments of homeschooled children have claimed that these students do well in that educational environment. In addition, a survey of homeschooled adults implies that homeschooling ushers in positive outcomes such as improved college enrollment and attendance.
Historically, homeschooling has been a key means for parents to offer education to their children. Most of the Founding Fathers of America went through this form of education, including Thomas Jefferson and George Washington (Coulson 120). With...
11 Pages(2750 words)Case Study
sponsored ads
Save Your Time for More Important Things
Let us write or edit the assignment on your topic "Obesity in Children" with a personal 20% discount.
GRAB THE BEST PAPER

Let us find you another Assignment on topic Obesity in Children for FREE!