Comments (0)
Add to wishlistDelete from wishlist
Cite this document
Summary
This essay describes a growing problem of obesity in children and adolescents that needs to be addressed within the shortest possible time. Understanding what exactly obesity is and how it manifests in children is the first step in finding effective solutions to the problem. …
Download full paperFile format: .doc, available for editing
HIDE THIS PAPERGRAB THE BEST PAPER97% of users find it useful 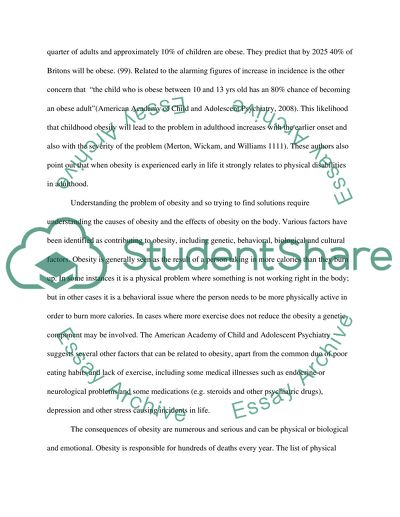 Extract of sample "Physical and Emotional Consequences of Obesity"

Download file to see previous pages This essay "Physical and Emotional Consequences of Obesity" describes the problem of obesity and its impact on the health. As The American Academy of Child and Adolescent Psychiatry explains, obesity in not just a few extra pounds of weight that a person has, but it may indicate a problem developing. They explain that a “child is not considered obese until the weight is at least 10% higher than what is recommended for the height and body type”. Obesity is defined in terms of body mass index (BMI), with the following quantities - DBMI 25-30 = overweight, BMI 30+ = obese and BMI 40+ or 100+ pounds over recommended weight = morbidly obese. This child may also indicate a tendency to gain weight easily, and therefore signal the need for changes in diet and exercise. It is not uncommon for obesity to begin early in childhood, between the ages of five and six, and also during the adolescent phase. The American Academy of Child and Adolescent Psychiatry quotes figures between 16 and 33% of children and adolescents as being obese.
The problems associated with obesity start with the increasing numbers of amount of children and adolescents manifesting obesity. According to Li and Hooker the percentage of obese children, 6 – 11 yrs old, “more than doubled in the past two decades”, and for adolescents, 12- 19 years old, it “more than tripled” (97). They also point out that the United States is not the only country with such trends as similar trends have been reported in countries such as England and China.
This global trend of increasing incidence of obesity is corroborated by Colls and Evans as they report that in the UK obesity has doubled over the past 25 years so that nearly a quarter of adults and approximately 10% of children are obese. They predict that by 2025 40% of Britons will be obese. (99). Related to the alarming figures of increase in incidence is the other concern that “the child who is obese between 10 and 13 yrs old has an 80% chance of becoming an obese adult”(American Academy of Child and Adolescent Psychiatry, 2008). This likelihood that childhood obesity will lead to the problem in adulthood increases with the earlier onset and also with the severity of the problem (Merton, Wickam, and Williams 1111). These authors also point out that when obesity is experienced early in life it strongly relates to physical disabilities in adulthood. Understanding the problem of obesity and so trying to find solutions require understanding the causes of obesity and the effects of obesity on the body. Various factors have been identified as contributing to obesity, including genetic, behavioral, biological and cultural factors. Obesity is generally seen as the result of a person taking in more calories than they burn up. In some instances it is a physical problem where something is not working right in the body; but in other cases it is a behavioral issue where the person needs to be more physically active in order to burn more calories. In cases where more exercise does not reduce the obesity a genetic component may be involved. The American Academy of Child and Adolescent Psychiatry suggests several other factors that can be related to obesity, apart from the common duo of poor eating habits and lack of exercise, including some medical illnesses such as endocrine or neurological problems and some medications (e.g. steroids and other psychiatric drugs), depression and other stress causing incidents in life. The consequences of obesity are numerous and serious and can be physical or biological and emotional. Obesity is responsible for hundreds of deaths every year. The list of physical consequences of obesity is long. Among these are: heart disease, high blood pressure, diabetes, sleep apnea, insomnia, and mobility issues (AACAP, 2008). Perhaps the most crucial is the effects on heart diseases. Obesity is ...Download file to see next pagesRead More
Share:
Tags
Cite this document
(“Physical and Emotional Consequences of Obesity Essay”, n.d.)
Retrieved de https://studentshare.org/health-sciences-medicine/1416585-physical-and-emotional-consequences-of-obesity

CHECK THESE SAMPLES OF Physical and Emotional Consequences of Obesity

Continued physical activities have been demonstrated through medical research to possess massive benefits to people as it assists in the attainment healthy cardio and the elimination of health threats associated with lifestyles. Mental health is the normal state of the mind which facilitates normal thinking and reasoning irrespective of the normal life pressures. Several factors influence the mental health of an individual including consistent physical activity and exercise. In this paper, the impacts of physical exercise on mental health and overall wellbeing will be examined (Dunn, Trivedi & O’Neal, 2001).
In the recent past, the relationship between increased physical activity and the mental health of individuals...
10 Pages(2500 words)Assignment
sponsored ads
Save Your Time for More Important Things
Let us write or edit the essay on your topic "Physical and Emotional Consequences of Obesity" with a personal 20% discount.
GRAB THE BEST PAPER

Let us find you another Essay on topic Physical and Emotional Consequences of Obesity for FREE!