Obesity. What is the role of private business in constructing obesity as a global health problem - Essay Example

Comments (0)
Add to wishlist Delete from wishlist
Cite this document
Summary
Obesity is not just an ordinary disease but it is considered as the leading metabolic sickness in the world at the start of the 21st century Obesity occurs both in affluent societies and developing countries leading to around 300 million people considered obese around the globe…
Download full paper File format: .doc, available for editing
HIDE THIS PAPERGRAB THE BEST PAPER91.3% of users find it useful 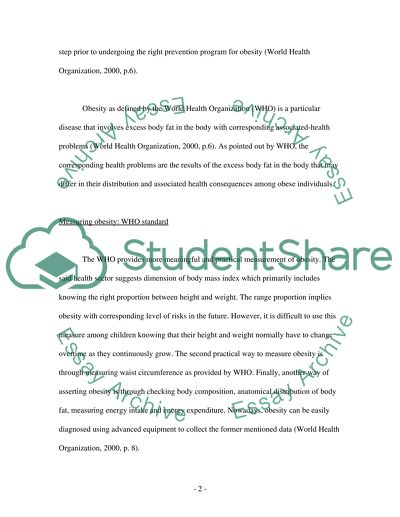 Extract of sample "Obesity. What is the role of private business in constructing obesity as a global health problem"

Download file to see previous pages Obesity is not just an ordinary disease but it is considered as the leading metabolic sickness in the world at the start of the 21st century (Formiguera and Canton, 2004, p.1125). Obesity occurs both in affluent societies and developing countries leading to around 300 million people considered obese around the globe. According to expert this figure may double in the year 2025 if there is nothing to be done about it (Formiguera and Canton, 2004, p.1125). This essay will focus on the role of private businesses in constructing obesity as a global health problem and show how relevant they are in rising the issue of fat and food related habits. Obesity brings complexities which primarily include diseases in metabolic and cardiovascular areas (Formiguera and Canton, 2004, p.1125). For this reason, obesity has triggered special attention among health experts and practitioners, and including ordinary individuals who are health conscious or may actually have been suffering the disease. The complications have received special attentions and consensus ideas have come to the point that the major solution of preventing them is to actually stop obesity (Formiguera and Canton, 2004, p.1125). It is important then to understand what obesity is and how it is acquired. The World Health Organization (WHO) believes that this is a very important step prior to undergoing the right prevention program for obesity (World Health Organization, 2000, p.6). ...
However, it is difficult to use this measure among children knowing that their height and weight normally have to change overtime as they continuously grow. The second practical way to measure obesity is through measuring waist circumference as provided by WHO. Finally, another way of asserting obesity is through checking body composition, anatomical distribution of body fat, measuring energy intake and energy expenditure. Nowadays, obesity can be easily diagnosed using advanced equipment to collect the former mentioned data (World Health Organization, 2000, p. 8). Based on the basic standard provided by WHO, a body mass index greater than 25.00 corresponding to dimension of body mass index is considered to be normally diagnosed for obesity and less than of it qualifies as underweight. On the other hand, increase in abdominal waist measurement is another subjective and physical indicator of obesity at certain point (World Health Organization, 2000, p. 8). Obesity is regarded as a lifestyle disease because of its strong association with food and exercise patterns among individuals (Stern and Kazaks, 2009, p.2). People around the globe changed their ways of living and it has contributed to the habits of how daily activities are managed accordingly. For instance, due to fast-pace actions, time has become so important among individuals. In order to save time, people have managed to use instant foods. Furthermore, due to lack of time, people may have overlooked the importance of daily and regular exercise. These are just some of the common reasons why obesity has increased over the years (Stern and Kazaks, 2009, p.2-3). There are further causes in detail that are strongly associated with obesity (Jebb, 2004, p.38). For instance, fast ...Download file to see next pages Read More
Share:
Tags
Cite this document
(“Obesity. What is the role of private business in constructing obesity Essay”, n.d.)
Retrieved from https://studentshare.org/health-sciences-medicine/1410783-what-is-the-role-of-private-business-in

(Obesity. What Is the Role of Private Business in Constructing Obesity Essay)
https://studentshare.org/health-sciences-medicine/1410783-what-is-the-role-of-private-business-in.

“Obesity. What Is the Role of Private Business in Constructing Obesity Essay”, n.d. https://studentshare.org/health-sciences-medicine/1410783-what-is-the-role-of-private-business-in.
Comments (0)
Click to create a comment or rate a document

CHECK THESE SAMPLES OF Obesity. What is the role of private business in constructing obesity as a global health problem

This is also the position Stone (2007) takes in the quote under discussion.
Furthermore, Stone goes on to declare that Australia has been very slow to implement this practice as compared with other countries and government agencies. One of the primary reasons is that the public policy system in Australia is quite complex and the decision-makers have not come into agreement on where to place it in the policy matrix. This leaves Interprofessional Practice and Education in the dark (or the cold) as far as strategic planning for implementation as well as placing itself within the funding cycles of the government disbursements. (Stone, 2007)
Policies are created in order to put in place how politicians and government official...
6 Pages (1500 words) Assignment
sponsored ads
Save Your Time for More Important Things
Let us write or edit the essay on your topic "Obesity. What is the role of private business in constructing obesity as a global health problem" with a personal 20% discount.
GRAB THE BEST PAPER

Let us find you another Essay on topic Obesity. What is the role of private business in constructing obesity as a global health problem for FREE!