Comments (1)
Add to wishlistDelete from wishlist
Cite this document
Summary
Posttraumatic stress disorder (PTSD) is defined as “an anxiety disorder precipitated by a traumatic event and characterized by symptoms of re-experiencing the trauma, avoidance and numbing, and hyper-arousal” (Tolin, D., Foa, E., 2008)…
Download full paperFile format: .doc, available for editing
HIDE THIS PAPERGRAB THE BEST PAPER93.2% of users find it useful 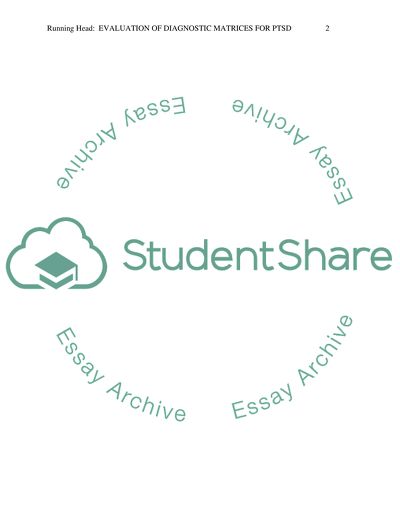 Download file to see previous pages PTSD can be experienced at any age and does not focus on a certain age group or gender. It has many causes such as natural disaster, conflict, rape, assault and other similar events (American Psychiatric Association, 2000).
Simply put, PSTD, also known as dissociative disorder can occur in some people after certain events. This may trigger them to feel certain kinds of mental or emotional strain when they are reminded of the event. According to The U.S. National Library of Medicine, PTSD’s symptoms include, but are not limited to avoidance, arousal or heightened alertness, reliving the event that caused the trauma, lack of interest in things that normally interest you, trouble sleeping, and others (MedlinePlus, 2012).
After PTSD has been confirmed or determined in a person, some of the treatments and interventions include cognitive behavioral therapy, counseling, medication, grounding techniques, stress management, group therapy, helping the client cope with stress and emotions, promoting self-esteem, and promoting client safety (Mayo Clinic, 2012).
PTSD diagnosis, test, and determination methods are the product of constant evaluation, criticism, success and improvement. These methods have been tailor fitted and sharpened to correctly assess people with PTSD and determine the next course of action. This process has evolved from older methods of determination (Castro, F., Hayes, J., Keane, T., 2011; Crary, C., 2012; Franklin, C.L., Sheeran, T., Zimmerman, M., 2002; National Institute of Mental Health, 2010). The goal of this scholarly project is to look at the diagnostic methods of determining PTSD, both old and recent, and assess them in such a manner as to determine their effectiveness, and critique their positive and negative points. It aims to look at these methods of determination and compare and contrast the recent methods with the old methods, in order to verify and check which method may be more effective. This paper will use recent scholarly articles in order to present information that will support the information used in the article. It will also ...Download file to see next pagesRead More
Share:
Tags
Cite this document
(“Evaluation of Diagnostic Matrices for Post Traumatic Stress Disorder Research Paper - 1”, n.d.)
Retrieved from https://studentshare.org/health-sciences-medicine/1397099-evaluation-of-diagnostic-matrices-for-post-traumatic-stress-disorder-ptsd

pg
pgrady added comment 1 year ago
Student rated this paper as
This research paper was always my weak point. I could never finish it on time. Still, after I found this precise paper, I understood how it should be completed. So, I performed my research afterward and completed the research paper in several hours, instead of weeks as it was previously.

Considering the goals and objectives of the organization, the various factors that have influenced the aspect of voting in favor of the emerging markets have been determined in this research paper. The critical evaluation of FIFA’s decision in awarding the emerging markets with the hosting rights of the Football Cup has been done by determination of the extent to which the goals and objectives of the governing body have been fulfilled with this decision (Baade and Matheson, 2004, p.353). The research problem also established the fairness of the World Cup Bidding Process and the basis of the FIFA Executive Committee’s decision in awarding the Football World Cup hosting to the developing countries. In order to analyze th...
29 Pages(7250 words)Dissertation
sponsored ads
Save Your Time for More Important Things
Let us write or edit the research paper on your topic "Evaluation of Diagnostic Matrices for Post Traumatic Stress Disorder (PTSD)" with a personal 20% discount.
GRAB THE BEST PAPER

Let us find you another Research Paper on topic Evaluation of Diagnostic Matrices for Post Traumatic Stress Disorder (PTSD) for FREE!