The Past, Present and Future of Health Insurance in America - Term Paper Example

Comments (0)
Add to wishlist Delete from wishlist
Cite this document
Summary
Benefit societies that cared for labour were formed. So in one way or another concrete platform for government healthcare was already laid in Europe while in America policy makers still faced hurdles. …
Download full paper File format: .doc, available for editing
HIDE THIS PAPERGRAB THE BEST PAPER94.8% of users find it useful 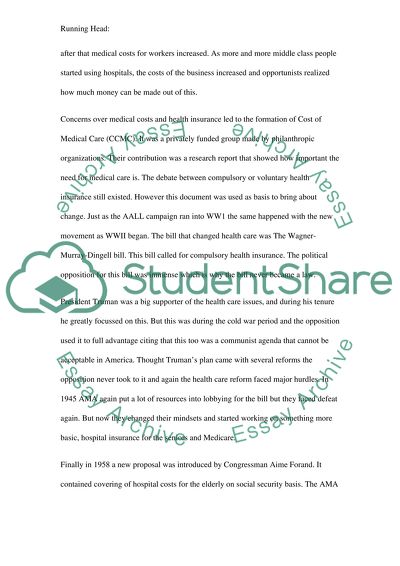 Extract of sample "The Past, Present and Future of Health Insurance in America"

Download file to see previous pages Originally the idea of proving healthcare to workers was a manipulative one as it was in exchange for the seeming power that could be had over them. US did have some funds for health purposes but there was no regulated law or policy in place. During President Roosevelt’s time some initiation did take place because of his belief in making the country strong, however the leaders that followed Roosevelt delayed any sort of law to be formed.
In 1906, American association of Labour legislation finally started a campaign for health insurance. A model bill was drafted years later in 1915 and was only limited to the working class health costs. The private insurance industry opposed this proposal as for them it would prove to be harmful to their own business.
When WW1 started, people denounced this compulsory health care policy as a German socialist agenda. They associated it with communism and declared that it was not in accordance with American values. This put an end to the debate till 1930s. But after that medical costs for workers increased. As more and more middle class people started using hospitals, the costs of the business increased and opportunists realized how much money can be made out of this. Concerns over medical costs and health insurance led to the formation of Cost of Medical Care (CCMC). It was a privately funded group made by philanthropic organizations. Their contribution was a research report that showed how important the need for medical care is. The debate between compulsory or voluntary health insurance still existed. However this document was used as basis to bring about change. Just as the AALL campaign ran into WW1 the same happened with the new movement as WWII began. The bill that changed health care was The Wagner-Murray-Dingell bill. This bill called for compulsory health insurance. The political opposition for this bill was immense which is why the bill never became a law. President Truman was a big supporter of the health care issues, and during his tenure he greatly focussed on this. But this was during the cold war period and the opposition used it to full advantage citing that this too was a communist agenda that cannot be acceptable in America. Thought Truman’s plan came with several reforms the opposition never took to it and again the health care reform faced major hurdles. In 1945 AMA again put a lot of resources into lobbying for the bill but they faced defeat again. But now they changed their mindsets and started working on something more basic, hospital insurance for the seniors and Medicare. Finally in 1958 a new proposal was introduced by Congressman Aime Forand. It contained covering of hospital costs for the elderly on social security basis. The AMA introduced a voluntary ‘eldercare plan’ against this, and in response the government expanded its legislation and Medicare and Medicaid were formed. Framework of U.S. Healthcare: U.S is the only developed country except South Korea that does not provide health care for all its population. Also the private sector dominates the public one. How the system is organized is discussed below: Private health insurance: Employer sponsored insurance: This is the main way common Americans receive insurance, through their employees. This is a part of their benefits package and is administered by both for profit and non profit organizations like Blue Cross/Blue shield etc. Some companies also self inure which means they pay for the ...Download file to see next pages Read More
Share:
Tags
Cite this document
(“The Past, Present and Future of Health Insurance in America Term Paper”, n.d.)
Retrieved from https://studentshare.org/health-sciences-medicine/1393014-the-past-present-and-future-of-health-insurance-in

(The Past, Present and Future of Health Insurance in America Term Paper)
https://studentshare.org/health-sciences-medicine/1393014-the-past-present-and-future-of-health-insurance-in.

“The Past, Present and Future of Health Insurance in America Term Paper”, n.d. https://studentshare.org/health-sciences-medicine/1393014-the-past-present-and-future-of-health-insurance-in.
Comments (0)
Click to create a comment or rate a document

CHECK THESE SAMPLES OF The Past, Present and Future of Health Insurance in America

Health promotion must emphasise both the mental and physical aspects of health because many physical manifestations of the disease have their roots in mental and psychological distress. This brief essay presents an examination of health promotion efforts designed to contain eating disorders, which are physical manifestations arising out of mental and psychological burdens imposed mostly by peers in schools. A discussion about eating disorders, which represent disorders with psychological roots, should assist in encouraging communities to inculcate respect for the individual, tolerance and harmony together with education to empower the individual.
It is important to have positive attitudes about health. Healthy nations are lik...
6 Pages (1500 words) Coursework

Despite the few negative incidences of crime committed by the United States of America’s security troops that were deployed in the country on a peacekeeping mission.
Since the war in Korea began in the early nineteen fifties, the United States has stationed tens of thousands of soldiers, mostly the United States’ army personnel, in South Korea. Through the assistance of the South Korean troops and other neighboring governments, the American troops have been able to guard and offer maximum security to South Korean people. In line with the argument of James (2003), ‘most of the military bases in South Korea are relatively isolated’ thus the need for much attention from the troops so as to ensure maximum...
10 Pages (2500 words) Assignment
sponsored ads
Save Your Time for More Important Things
Let us write or edit the term paper on your topic "The Past, Present and Future of Health Insurance in America" with a personal 20% discount.
GRAB THE BEST PAPER

Let us find you another Term Paper on topic The Past, Present and Future of Health Insurance in America for FREE!