Comments (1)
Add to wishlistDelete from wishlist
Cite this document
Summary
The role of iron in the body and its homeostasis. The trace element or micronutrient iron plays a major role in some important functions in the body. …
Download full paperFile format: .doc, available for editing
HIDE THIS PAPERGRAB THE BEST PAPER97.2% of users find it useful 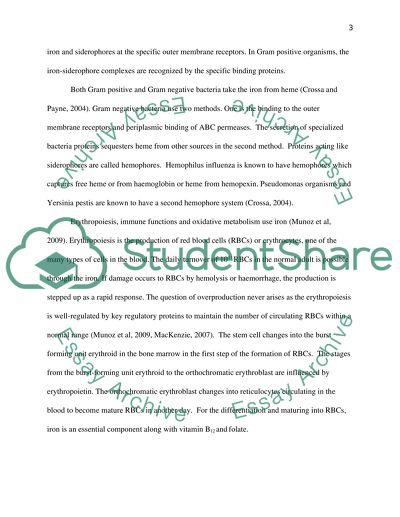 Download file to see previous pages Cytoplasmic iron is in the reduced form and therefore ready to undergo oxidation. If nearby lipids are peroxidised, DNA and other macromolecules can be damaged (MacKenzie et al, 2007). This makes severe iron overload and iron deficiency equally disastrous. The concentration of iron in mammalian tissues is not very high because the iron is sequestered by several host proteins like serum transferrin and lactoferrin and is not readily available. The microorganisms which invade the body compete with transferrin for the iron. Secreting siderophores which bind with iron has the property of preventing invasion by pathogenic bacteria (Crossa and Payne, 2004). The growth and multiplication of microorganisms are hindered in the presence of iron present at physiological ph of the body as its solubility is poor. An organism which cannot avail of iron from its many sources would be unsuccessful as a pathogen. Gram negative microorganisms are recognized by the complexes of iron and siderophores at the specific outer membrane receptors. In Gram positive organisms, the iron-siderophore complexes are recognized by the specific binding proteins.
Both Gram positive and Gram negative bacteria take the iron from heme (Crossa and Payne, 2004). Gram negative bacteria use two methods. One is the binding to the outer membrane receptors and periplasmic binding of ABC permeases. The secretion of specialized bacteria proteins sequesters heme from other sources in the second method. Proteins acting like siderophores are called hemophores. Hemophilus influenza is known to have hemophores which captures free heme or from haemoglobin or heme from hemopexin. Pseudomonas organisms and Yersinia pestis are known to have a second hemophore system (Crossa, 2004). Erythropoiesis, immune functions and oxidative metabolism use iron (Munoz et al, 2009). Erythropoiesis is the production of red blood cells (RBCs) or erythrocytes, one of the many types of cells in the blood. The daily turnover of 1011 RBCs in the normal adult is possible through the iron. If damage occurs to RBCs by hemolysis or haemorrhage, the production is stepped up as a rapid response. The question of overproduction never arises as the erythropoiesis is well-regulated by key regulatory proteins to maintain the number of circulating RBCs within a normal range (Munoz et al, 2009, MacKenzie, 2007). The stem cell changes into the burst forming unit erythroid in the bone marrow in the first step of the formation of RBCs. The stages from the burst-forming unit erythroid to the orthochromatic erythroblast are influenced by erythropoietin. The orthochromatic erythroblast changes into reticulocytes circulating in the blood to become mature RBCs in another day. For the differentiation and maturing into RBCs, iron is an essential component along with vitamin B12 and folate. Oxidative metabolism Many metabolic processes essentially requires iron for their functions but an excess of iron also can cause damage to the cells through oxidative stress by the release of free hydroxyl radicals which are reactive and harmful (He et al, 2007, MacKenzie et al, 2007). Iron is absorbed but cannot be excreted ...Download file to see next pagesRead More
Share:
Tags
Cite this document
(“Chemotherapy and drug drug design Dissertation Example | Topics and Well Written Essays - 4000 words”, n.d.)
Retrieved de https://studentshare.org/health-sciences-medicine/1391958-chemotherapy-and-drug-drug-design

be
bertram14 added comment 1 year ago
Student rated this paper as
I had an issue with a dissertation types of works. All until I came across this website and this particular paper. Even though "Chemotherapy and drug drug design" is far from my interests, the structure is so great that I use it all the time as an example for my own works.

CHECK THESE SAMPLES OF Chemotherapy and drug drug design

The above equation is a natural exponential equatio...

...Tourism and Holiday Leisure Design The tourism and holiday sector is one of the fastest growing service sectors in most parts of the world. This sector is composed of tour operators, travel agents and transport services for tourists and holiday seekers. Each of these individuals plays a big role in the manner in which tourism and holiday leisure products and services are designed so as to ensure that the customers are well satisfied. This industry is one that thrives mainly on the concept of innovation and originality. The leisure products should be designed in an innovative way so that as many tourists as possible can be attracted to it (Pikketmaat and Weiermair, nd). There are many things that are required for the design of holiday...
6 Pages(1500 words)Term Paper

The consideration here was simply whether the accused design was too close to the registered design in accordance with the tests laid down in the law. It wasn’t a matter of whether or not Apple could have sued in England and Wales for copying utterly irrelevant to this case. In case, they could, they did not. Likewise, infringement of any patent for an invention is never an issue. Quite a lot of differences in the products existed. For instance, the iPad seemed thinner and has noticeably different curves on its sides.
Preliminary Injunctions for this case were applied by apple in respect of all three Samsung tablets in the Netherlands. It got a setback at first instance and on appeal. The Apple inc. had an outstanding p...
9 Pages(2250 words)Case Study
sponsored ads
Save Your Time for More Important Things
Let us write or edit the dissertation on your topic "Chemotherapy and drug drug design" with a personal 20% discount.
GRAB THE BEST PAPER

Let us find you another Dissertation on topic Chemotherapy and drug drug design for FREE!