Geology of the Ross of Mull, Iona and Staffa - Term Paper Example

Comments (0)
Add to wishlistDelete from wishlist
Cite this document
Summary
The author of the "Geology of the Ross of Mull, Iona and Staffa" paper reviews the published geologic literature of the Ross of Mull including the Islands of Iona and Staffa. This natural sight of Scotland, located in the Inner Hebrides, is the second-largest island in that region.  …
Download full paperFile format: .doc, available for editing
HIDE THIS PAPERGRAB THE BEST PAPER92.5% of users find it useful 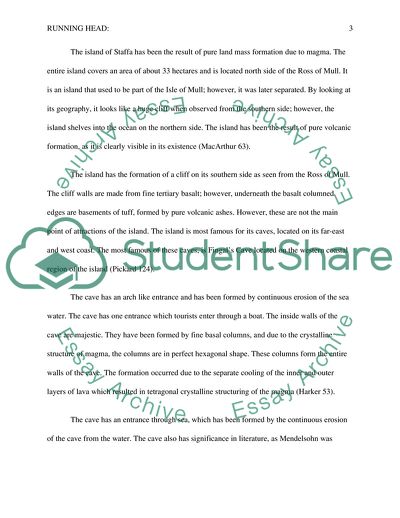 Extract of sample "Geology of the Ross of Mull, Iona and Staffa"

Download file to see previous pages The Ross of Mull is the main point of concentration. It is the largest peninsula on the island, filled with prehistoric geographical features that represent various geological events that took place millions of years ago. This includes steep cliffs of lava in the north and large mountainous roots in the south, which show clear proof of high volcanic activity in this region at some point in time in the past. Such is the sheer contrast of this region, that there are sandy beaches as well as hard granite deposits in this same region (Wilson 392).

The entire geography of the Ross of Mull depicts various prehistoric activities that will help geologists understand the movement of landmass, tectonic plates and volcanic activity in the European and North Atlantic region which has resulted in the current formation European geography. It has become a haven for geologists in investigating the long lost past and helps them portray and predict future movements and activities. Activities that will further change the shape of Europe and the world as we know it.

The island of Staffa has been the result of pure landmass formation due to magma. The entire island covers an area of about 33 hectares and is located north side of the Ross of Mull. It is an island that used to be part of the Isle of Mull; however, it was later separated. By looking at its geography, it looks like a huge cliff when observed from the southern side; however, the island shelves into the ocean on the northern side. The island has been the result of pure volcanic formation, as it is clearly visible in its existence (MacArthur 63).

CHECK THESE SAMPLES OF Geology of the Ross of Mull, Iona and Staffa

... How Body Mass Index (BMI) and Waist Circumference influence the rising rates of obesity within the Royal Air Force? Throughout this research proposal, the author aims to assess whether the prevalence of obesity is on the increase or whether the assessment criteria of Body Mass Index (BMI) and Waist Circumference measurements are influencing these rising rates of obesity within service personnel. The rationale for undertaking this research proposal is that the author has worked within Primary Health Care for the past 12 yrs and it appears that there has been a steady increase in the number of Royal Air Force (RAF) personnel being referred for weight management. Information on the prevalence of obesity within the military... How Body Mass...
16 Pages(4000 words)Essay

...Overview There has been growing fear between many scientists that human interferences are modifying the capa of ecosystems to endow with their goods (e.g. freshwater, food, pharmaceutical products, etc) and services (e.g. purification of air, water, soil, sequestration of pollutants, etc). This can lead to ecosystem disorder and bear a significant impact on humans and animals as well as plants, in a variety of ways and through complex pathways. These are moreover modified by the population's existing vulnerability and their future capacity to execute adjustment measures. Because of these concerns, the prominent changes, at least many of it, occur so in the arctic region. The basis for this is strong positive feedback associated... There has ...
14 Pages(3500 words)Essay

... GEOLOGY OF TRICERATOPS TRAIL Triceratops Trail is a 5-mile, rock hiking trail is spotted to the east ofsixth Avenue and nineteenth Street in Golden, Colorado. The trail winds between substantial, vertical dividers of sandstone and into recovered earth pits. The trek ought to take around an hour round excursion and include a couple of spots troublesome/outlandish for elderly and/or disabled persons to get to. Along the trail are a few quits highlighting earth mining and dinosaur, mammal, birds, creepy crawly and invertebrate tracks and follow, and a few dividers loaded with plant impressions from the tree-lined delta-natures turf (trail). There are footprints at Triceratops Trail that vary from those at Dinosaur Ridge. The Dinosaur Ridge...
1 Pages(250 words)Essay
sponsored ads
Save Your Time for More Important Things
Let us write or edit the term paper on your topic "Geology of the Ross of Mull, Iona and Staffa" with a personal 20% discount.
GRAB THE BEST PAPER

Let us find you another Term Paper on topic Geology of the Ross of Mull, Iona and Staffa for FREE!