Comments (0)
Add to wishlistDelete from wishlist
Cite this document
Summary
However, these soils receive insufficient rainfall due to the climate and it is for this reason that they always retain their soluble salts. The order of arid soils is characterized by three levels which are:
It is however…
Download full paperFile format: .doc, available for editing
HIDE THIS PAPERGRAB THE BEST PAPER96.1% of users find it useful 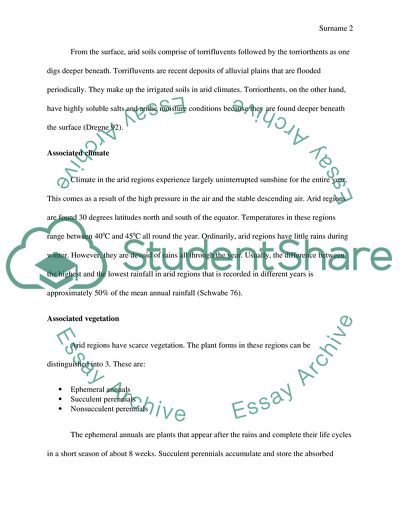 Soil order and their associated environmental climates Arid soil Soil order The soil orders of arid soils are always free-draining. However, these soils receive insufficient rainfall due to the climate and it is for this reason that they always retain their soluble salts. The order of arid soils is characterized by three levels which are:
Oxisol
Vertisol
Entisol
It is however important to note that not all arid soils are classified in the aridsol order. Some have unique compositions that place them in other orders of soil. Oxisols are weathered soils found in the tropical regions. Their common compositions are quartz, aluminum and iron oxides. Also contained in this composition are low activity cays.
The vertisol order of arid soils comprises of soils that contain swelling clays that develop deep wide cracks at specific periods of the year. Entisol, on the other hand, comprises of soils that exhibit very little or absolutely no signs of formation of pedogenic horizons.
From the surface, arid soils comprise of torrifluvents followed by the torriorthents as one digs deeper beneath. Torrifluvents are recent deposits of alluvial plains that are flooded periodically. They make up the irrigated soils in arid climates. Torriorthents, on the other hand, have highly soluble salts and aridic moisture conditions because they are found deeper beneath the surface (Dregne 92).
Associated climate
Climate in the arid regions experience largely uninterrupted sunshine for the entire year. This comes as a result of the high pressure in the air and the stable descending air. Arid regions are found 30 degrees latitudes north and south of the equator. Temperatures in these regions range between 400C and 450C all round the year. Ordinarily, arid regions have little rains during winter. However, they are devoid of rains all through the year. Usually, the difference between the highest and the lowest rainfall in arid regions that is recorded in different years is approximately 50% of the mean annual rainfall (Schwabe 76).
Associated vegetation
Arid regions have scarce vegetation. The plant forms in these regions can be distinguished into 3. These are:
Ephemeral annuals
Succulent perennials
Nonsucculent perennials
The ephemeral annuals are plants that appear after the rains and complete their life cycles in a short season of about 8 weeks. Succulent perennials accumulate and store the absorbed water. These are cacti. Nonsucculent perennials make up the majority of vegetation or plants in the arid regions. They include hardy grasses, shrubs and woody herbs that can endure the harsh environmental conditions in the arid zones (Ribot, Antonio 95).
It goes without noticing the adaptive features of the vegetation that thrive in the arid zones. For instance, some have extensive root systems that run deep beneath the surfaces to reach the relatively moisturized strata of soil. Some also reduce their transpiration surfaces by either shading their leaves during summer or by rolling their leaves. This helps in regulating water loss through transpiration (Dregne 132). Other plants in these regions also have heavily wax-coated leaves that lessen transpiration. Plants with this adaptation are called sclerophylls.
Representative location (country)
The countries in which arid conditions are experienced include:
Region
Countries
West Africa
Benin
Mauritania
Burkina Faso
Ghana
Nigeria
Liberia
Sierra Leone
Mali
Senegal
East and Southern Africa
Angola
Eritrea
Botswana
Ethiopia
Madagascar
Kenya
Lesotho
Malawi
Rwanda
Sudan
Namibia
South Africa
South Sudan
Mozambique
Swaziland
Uganda
Zambia
Tanzania
Zimbabwe
Central Asia
Kazakhstan
Turkmenistan
Tajikistan
Kyrgyzstan
Uzbekistan
South Asia
Bangladesh
Pakistan
India
Sri Lanka
Central Africa
Cameroon
Gabon
DR of the Congo
Chad
Niger
Works Cited
Dregne, H E. Soils of Arid Regions. Amsterdam: Elsevier Scientific Pub. Co, 1976. Internet resource.
Ribot, Jesse C, Antonio R. Magalhães, and Stahis S. Panagides. Climate Variability, Climate Change and Social Vulnerability in the Semi-Arid Tropics. Cambridge: Cambridge University Press, 2005. Print.
Schwabe, Kurt. Drought in Arid and Semi-Arid Regions: A Multi-Disciplinary and Cross- Country Perspective. Dordrecht: Springer, 2013. Internet resource. Read More
Share:
Tags
Cite this document
(“Soil order Essay Example | Topics and Well Written Essays - 500 words”, n.d.)
Soil order Essay Example | Topics and Well Written Essays - 500 words. Retrieved from https://studentshare.org/geography/1688372-soil-order

CHECK THESE SAMPLES OF Soil order

This is usually because soil is by natural forces in tension and shear, although it is comparatively stronger in compression. Soils have relatively low tensile strength so that they are not able to transfer all of forces arising in a structure when it is loaded (Jan 2007). Tension failure can be marked in the form of tension cracks in certain situations, however, slopes and embankments are predominantly the areas where shear fails. Under a load, soil distorts when placed under a load (Thinaga 2004).
In historic times, builders realized early that the soil at one place is different from another. They also realized that building structures built at one place couldn't be copied as they were to another place. This created many ch...
8 Pages(2000 words)Essay

The Relationship Between Soil Properties and Soil Erodibility

...The Relationship Between Soil Properties and Soil Erodibility Introduction Soil erodibility is influenced by individual site factors such as topography vegetation, and rainfall; however, beyond these influences, the single most important factor in soil erodibility is the soil's properties, both physical and chemical (Rhoton, Emmerich, Goodrich, McChesney & Miller, 1998, p. 415). Physical and chemical properties of soil Physical properties of soil The different physical properties of soil 1. Soil Texture 2. Soil Structure 3. Soil Consistence 4. Soil Color 5. Topography 6. Land use Soil texture Soil constituents are sand, silt, clay and soil texture is about the size and shape of these constituents. The composition of sand, silt and clay...
8 Pages(2000 words)Essay

...Running head: MICROBES IN SOIL & PATHOLOGY. Soil and Microbes Kona Vishnu India October 23, 2005 Abstract The article Soil and Microbes first gives a brief introduction with properties of different soils and their nature. Then the article deals at length about various microorganisms present in the soils, their detection, isolation and their pathogenic effects followed by references. Soil and Microbes Different soils such as sandy soils, soils with clay and silty soils have different levels of acidity, alkalinity, solubility and capability to hold or release nutrients. Soils are basically a mixture of minerals and organic materials. The soil properties such as color, texture and organic content may differ as we go deep. Due care...
5 Pages(1250 words)Essay

... settlement. Immediate settlement can be estimated using the results from elastic theory, which will be able to determine the elastic properties of the soil. Furthermore, before a structure is completely conceptualised, the magnitude and the rate of consolidation settlement should first be predicted using effective tools. One of the popular processes used in predicting the progress of consolidation is by setting up piezometers in order to document the change in pore water pressure with time. The scale of consolidation settlement can be determined by recording the levels of appropriate reference points on a construction and in the surface on which it will be built. In such measurement, levelling of the reference points should be accurate...
5 Pages(1250 words)Essay

... Soil Concentration Elemental composition that is found in soils has anomalies leading to plant stress, as well as increased salt concentration (Cl-), and Ca2+ mineral nutrients. The salt concentration found in soil solutions is measured in form of its salinity. The amount of Cl- present in a given soil solution determines its salinity, which is required for proper plant life. Cac2+ is an important mineral nutrient in soil for plant life, but is harmful if in excess. The main cause of soil salinity can be attributed to the water management practices used on a given soil solution. High concentrations of Cl- destabilize membranes and denatured proteins, which is toxic for plants through soil degradation (Huang 17). Due to the decreased...
1 Pages(250 words)Essay

..., soil water has low pressure, but the impact of the earthquake increases the pressure of the water in the soil, particularly between the individual soil particles (Muiri, 1990). These particles, pressing against one another, break and reduce in strength and stiffness. Developments made on the surface of the earth by human efforts exert heavy weight on the soil increasing the pressure in the soil water and this too can cause changes in the strength of the soil. Ground improvements are the various ways by which soil engineering properties are made better in order to reduce exertion of pressure on the soil particles by the water. The properties of concern are; the ability of the soil to pass water, shear strength and soil stiffness...
2 Pages(500 words)Research Paper

The terrain of the ground can be described as flat since there was no any steepness was observed. On the east side of the site, walkway was present while buildings were not within the vicinity of the site as shown on the map.
Before the excavation of trial pit the top soil was removed. The next step was to place all the layers of soil according to their extraction order. This was very important as the characteristics of the soil at different depth would be established. Tests such as Moisture Probe test, the Mackintosh test, shear vane test and the permeability test were conducted to establish the properties of various strata. The results of these tests revealed that;
This test is aimed at measuring the ability of the soil...
3 Pages(750 words)Essay

...Running head: Soil Mechanics Soil Mechanics-Tri-axial Tests College: Table of Contents 3 0 Introduction 3 2.0 Methodology 4 3.0 Results 5 3.1 Cohesion and angle of friction 5 Drained effective stress 7 3.2 Calculation of the ultimate bearing capacity 8 4.0 Discussion 9 5.0 Conclusion 9 Bibliography 10 Abstract An investigation into the proposed construction of a new building on the land that will produce a load of 1500kN/m2 .This land was recently purchased by Ralph and Ralph associates and the location had not been disclosed. The advise to the client was that the load was required to be equally distributed on three continuous foundations each having 2 m wide and depth of 1.5 m. Basing on the information from Geo-environmental surveys Ltd...
5 Pages(1250 words)Lab Report

...SOIL MECHANICS A. Procedure for installing retaining wall Step one Asses and determine the height of the wall, H. Determine the properties of the entailed din the granular backfill substance for instance unit weight (1) and entailed angle of friction (ɸ1) Step two Next note and obtain the soil-tie friction angle (ɸU) and the also the related values of FS (B) and FS (P) In case if internal stability Step three Assume the values for the horizontal and vertical tie spacing thus assume width of the reinforcing strip .w to be used in the process. Step four Derive the a from the equation Step five: derive the tie forces at various levels while considering the equation The tie force per unit length of the retaining wall established...
5 Pages(1250 words)Assignment
sponsored ads
Save Your Time for More Important Things
Let us write or edit the essay on your topic "Soil order" with a personal 20% discount.
GRAB THE BEST PAPER

Let us find you another Essay on topic Soil order for FREE!