Comments (0)
Add to wishlistDelete from wishlist
Cite this document
Summary
Dr Hamdan: Dr Hamdah is an intellectual with critical and open view of life; she expresses her frustrations with the lack of openness and tolerance in Emirates. Dr Hamdah is also a committed Muslim lady- Dr Hamdah confesses that Islam is central in her life; the practice of…
Download full paperFile format: .doc, available for editing
HIDE THIS PAPERGRAB THE BEST PAPER92.1% of users find it useful 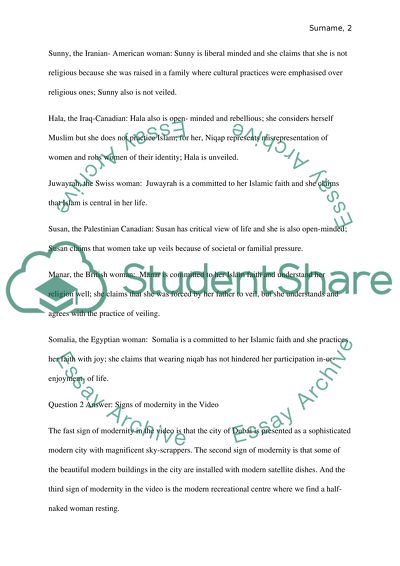 Download file to see previous pages Hala, the Iraq-Canadian: Hala also is open- minded and rebellious; she considers herself Muslim but she does not practice Islam; for her, Niqap represents misrepresentation of women and robs women of their identity; Hala is unveiled.
Manar, the British woman: Manar is committed to her Islam faith and understand her religion well; she claims that she was forced by her father to veil, but she understands and agrees with the practice of veiling.
Somalia, the Egyptian woman: Somalia is a committed to her Islamic faith and she practices her faith with joy; she claims that wearing niqab has not hindered her participation in-or-enjoyment- of life.
The fast sign of modernity in the video is that the city of Dubai is presented as a sophisticated modern city with magnificent sky-scrappers. The second sign of modernity is that some of the beautiful modern buildings in the city are installed with modern satellite dishes. And the third sign of modernity in the video is the modern recreational centre where we find a half-naked woman resting.
Question 3 Answer: Meaning of hijab as mentioned by women in the video. According to the women in the video, hijab can represent pious devotion to Islam, or subjugation and oppression of women. The women who argued that hijab is unnecessary in the modern world viewed hijab as a sign of subjugation and oppression of Muslim women, while the women who argued that hijab is a sign of pious devotion to Islam by Muslim women argued that hijab the practice of veiling elevates Muslim women and makes them to be respected.
The main difference of opinion among the women in the video in regard to religion is that some of the women in the video do not regard religion as being important in their lives, while some other women in the video regard their religion is being central and very important in their ...Download file to see next pagesRead More
Share:
Tags
Cite this document
(“In-class activity: (Un)veiled: Muslim Women Talk About Hijab Coursework”, n.d.)
Retrieved from https://studentshare.org/geography/1685579-in-class-activity-unveiled-muslim-women-talk-about-hijab

Women constitute a group whose rights are systematically violated around the world. A holistic look at an average Muslim woman’s life can help determine the allocation of inferior rights in Islam. In most Muslim countries, especially in the rural regions of developing countries, if girls are born, they are considered as a burden on the family for reasons associated with fear of loss of dignity and honor and as a symbol of inferiority as they are viewed as a cumbersome duty levied on the parents. The omnipresence of these notions varies only slightly across different cultures, but what is important to note here is that these notions are almost ubiquitous. Moreover, upon reaching adolescence, women are obliged by Islamic law t...
4 Pages(1000 words)Essay

Women in Saudi Arabia. The Hijab

Said posits that orientalism is actually a science that the Europeans developed during the colonial times to study the people of the east/ the Orientals. They divided the world into the occident and the orient, meaning the civilized and uncivilized respectively. They used this concept to justify their colonization them being the oriental or the superior race. Islamic orientalism has received constant attacks with Islam being perceived as a weak religion with a mixture of different religions and thoughts. This essay majors on the orientalist view of the hijab (Said, 1978). The phenomenon of wearing the hijab is popular in the Maghreb countries among women and young girls. It is a dress code that ensures the curves of a woman’s bod...
5 Pages(1250 words)Essay

Though the women have initiated efforts to lift the oppression they have been going through because of the male superiority, it's still evident that religious doctrines have been misused and are still being misused to oppress women. Muslim has been very notorious for this act compared to other religions which are moving towards equality in places of worship and observance of religious beliefs (Roald 2008).
In the West, the women have quite a say in social issues as there are some organizations that take care of human rights hence the freedom of worship is influenced. Many of them have been noted to be shifting from traditional religions like Muslims, orthodox depending on the place and forming moir contemporary ways of worshi...
4 Pages(1000 words)Essay

... is one of the most important parts of doing a group activity. A group and its members have to know the goal of the team in order to know what is wanted out of them. A goal is said to be the future aim of the organisation or the outcome that the org wants to achieve. (http://blackboard.rmit.edu.au/courses/1/DM301/content/_441149_1/Planning___Goal_setting.pdf). The members also have to share the same enthusiasm about the set goals as each other member in order for the team to work properly together. A team however, cannot just have any kind of goals; they have to be SMART goals. Smart pertains to specific, measurable, attainable, relevant and time related. ii. There are 8 steps in the goal setting process. However, given that there wasn’t...
14 Pages(3500 words)Essay

... 01 February 2009 Muslim Women in Medieval Spain The first three hundred years of the Muslim conquest gaveSpain a unique character among west European countries. Save for the Pyrenean regions and the territory to the north of the River Duero, the entire land mass was subjected by and received the imprint of Islamic civilization. Three centuries of virtually undisputed Muslim rule gave Spain its indelibly Moorish characteristics (Mann 12). Spains Moorish past is so readily accepted by the modern traveler that it requires some effort to grasp the scale of the revolution that over, took the peninsula. A wholly foreign race professing a strongly hostile religion took over the country, a totally alien language became the official tongue...
10 Pages(2500 words)Essay

... females who wear the headscarf could be targeted to a greater extent. This is due to the fact that their headscarf can be recognised instantly (Carland 473). In addition, it is generally believed that Muslim women are submissive, which renders them soft targets. Moreover, in the UK, Islamophobia can lead to a greater proportion of attacks upon Muslim women than men. The report “Maybe We Are Hated” disclosed that 58% of victims of Islamophobia in the UK were females. Moreover, 80% of these females had been wearing the hijab or headscarf, at the time of the attacks (PRESS TV). Furthermore, Islamophobic oppression becomes a major issue for Muslim females who diligently follow the dress codes of Islam. One of these is the well - known hijab...
2 Pages(500 words)Essay
sponsored ads
Save Your Time for More Important Things
Let us write or edit the coursework on your topic "In-class activity: (Un)veiled: Muslim Women Talk About Hijab" with a personal 20% discount.
GRAB THE BEST PAPER

Let us find you another Coursework on topic In-class activity: (Un)veiled: Muslim Women Talk About Hijab for FREE!