Comments (0)
Add to wishlist Delete from wishlist
Cite this document
Summary
Although China is fast emerging as a new Superpower country in the world, the reality of their situation as a nation is that their policies have not had a chance to catch up with their international status as a country. China is viewed in our modern times the country that grew…
Download full paper File format: .doc, available for editing
HIDE THIS PAPERGRAB THE BEST PAPER98.8% of users find it useful 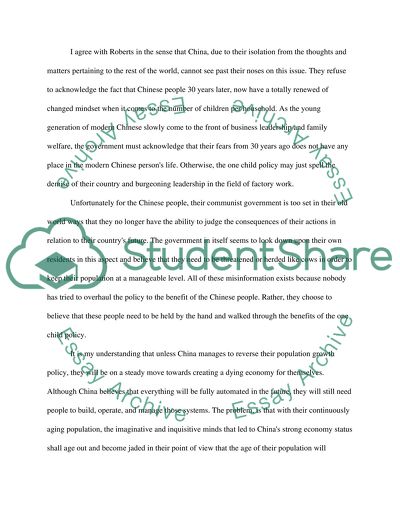 Mini Reaction Article Summary Although China is fast emerging as a new Superpower country in the world, the reality of their situation as a nationis that their policies have not had a chance to catch up with their international status as a country. China is viewed in our modern times the country that grew itself out of the struggles of the poor and their leaders ability to recognize potential problems and then swiftly deal with the situation before it gets out of hand. One of those potential future problems that China believes it is facing is the way certain citizens have chosen to ignore their One Child Policy in favor of having a second child.
Dexter Roberts, who wrote the article “The End of Chinas One-Child Policy” on behalf of Bloomberg Business Week took and depth look at the current population scenario in China and its possible impact on the growth of their economy and the fate of their aging population. The picture that he paints is quite grim. Roberts believes that unless China reverses its one child policy for its citizens, the country may die a natural death due to the lack of younger people who can fuel the growth of their population.
It is easy to see why Roberts would think twice about the future of China as an emerging economy within the next year since their population seems to be on a shrinking trend as their population of factory workers continue to mature in age.
Chinas policy of having only one child per family has, in my honest and humble opinion, provided a detrimental growth scenario for the country. As such, China could fall prey to a once imagined scenario. That of a country that had such a small population that they could not repopulate fast enough and therefore, caused their line of ancestry to disappear from the maps of the world.
I agree with Roberts in the sense that China, due to their isolation from the thoughts and matters pertaining to the rest of the world, cannot see past their noses on this issue. They refuse to acknowledge the fact that Chinese people 30 years later, now have a totally renewed of changed mindset when it comes to the number of children per household. As the young generation of modern Chinese slowly come to the front of business leadership and family welfare, the government must acknowledge that their fears from 30 years ago does not have any place in the modern Chinese persons life. Otherwise, the one child policy may just spell the demise of their country and burgeoning leadership in the field of factory work.
Unfortunately for the Chinese people, their communist government is too set in their old world ways that they no longer have the ability to judge the consequences of their actions in relation to their countrys future. The government in itself seems to look down upon their own residents in this aspect and believe that they need to be threatened or herded like cows in order to keep their population at a manageable level. All of these misinformation exists because nobody has tried to overhaul the policy to the benefit of the Chinese people. Rather, they choose to believe that these people need to be held by the hand and walked through the benefits of the one child policy.
It is my understanding that unless China manages to reverse their population growth policy, they will be on a steady move towards creating a dying economy for themselves. Although China believes that everything will be fully automated in the future, they will still need people to build, operate, and manage those systems. The problem, is that with their continuously aging population, the imaginative and inquisitive minds that led to Chinas strong economy status shall age out and become jaded in their point of view that the age of their population will eventually have an economic impact on their country.

CHECK THESE SAMPLES OF SEE INSTRUCTION/ CHINA ONE CHILD POLICY

... and nothing of the original. As he explains in his allegory of the cave, Plato does not view reality as being the world of substance and things that we can see in everyday life, but is something more abstract that, once understood, can lead one to the greatest good. In determining the path to the greatest good, Plato differs from Socrates in the proper method of obtaining that level. Where Socrates says it is through right action, Plato says it is through correct thought (Strathern, 1996, p. 25). In the case of humans, the perfect form is commonly identified as the soul, which, existing in the realm of ideals, begins in a perfect state and can only be harmed by the wrong actions defined by Socrates (Magee, 1998, p. 29) or by the wrong...
12 Pages (3000 words) Case Study

The Optional Protocol and Article 38 of the Convention on the Rights of the Child were necessitated by the fact that children participate in conflicts directly by b...
10 Pages (2500 words) Term Paper

To ensure that the education sector is diversified it is seen that in the United States of America many such policies have been implemented. In 1970s diversity was considered an important tool by the educational experts so that they could help students understand each other. The board of education of North Carolina then formulated a scheme for students through which they could practice a diversity of races in schools. This was known as the North Carolina Wake County Busing Policy which was functional till the late twenty-first century. It was now in July 2010 that the issue was raised again by the educational board members who then decided to scrap the policy of diversity with community-based schools. (Liane Membis 2010; Stacy Tei...
7 Pages (1750 words) Case Study

The attempts by foreign investments to penetrate China’s market have proven futile in the past especially due to the conservative nature of the inhabitants. China is a strict country when it comes to culture and cultural interaction. For ex...
7 Pages (1750 words) Coursework

Despite the necessity of a highly integrated and converged international reporting system, it s...
15 Pages (3750 words) Research Proposal
sponsored ads
Save Your Time for More Important Things
Let us write or edit the term paper on your topic "SEE INSTRUCTION/ CHINA ONE CHILD POLICY" with a personal 20% discount.
GRAB THE BEST PAPER

Let us find you another Term Paper on topic SEE INSTRUCTION/ CHINA ONE CHILD POLICY for FREE!