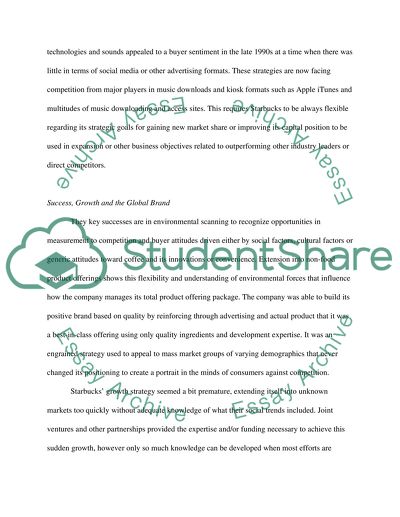 Download file to see previous pages The company also maintains threats that come directly from the consumer and their attitude regarding Starbucks’ quality and viability to fit their needs. Domestically, the success in consumer attitude or its previous ability to corner the market on unique coffee products met with higher capital growth for expansion into new market environments. However, the business has had to adjust its marketing strategies to include extension into the virtual environment, as only one example, because of this influence. Coupled with growth in competition know-how and product replication, Starbucks is unsure of whether its expansion from years prior will continue to serve its sustainability or growth objectives. The extension of other value-added products such as theater tickets or other branded merchandise is one contingency for revenue production that meets with short-term gains based on social or cultural trends. However, Starbucks seems to be able to recognize the appropriate short-term branding partnerships and builds, at least, a short-run increase in sales growth. Starbucks’ hot spot music-related product focus is yet another example of its short-term focus in gaining higher revenues. Using reputable artists or other media to explore new technologies and sounds appealed to a buyer sentiment in the late 1990s at a time when there was little in terms of social media or other advertising formats. These strategies are now facing competition from major players in music downloads and kiosk formats such as Apple iTunes and multitudes of music downloading and access sites. This requires Starbucks to be always flexible regarding its strategic goals for gaining new market share or improving its capital position to be used in expansion or other business objectives related to outperforming other industry leaders or direct competitors. Success, Growth and the Global Brand They key successes are in environmental scanning to recognize opportunities in measurement to competition and buyer attitudes driven either by social factors, cultural factors or generic attitudes toward coffee and its innovations or convenience. Extension into non-food product offerings shows this flexibility and understanding of environmental forces that influence how the company manages its total product offering package. The company was able to build its positive brand based on quality by reinforcing through advertising and actual product that it was a best-in-class offering using only quality ingredients and development expertise. It was an engrained strategy used to appeal to mass market groups of varying demographics that never changed its positioning to create a portrait in the minds of consumers against competition. Starbucks’ growth strategy seemed a bit premature, extending itself into unknown markets too quickly without adequate knowledge of what their social trends included. Joint ventures and other partnerships provided the expertise and/or funding necessary to achieve this sudden growth, however only so much knowledge can be developed when most efforts are directed toward product innovation as a key goal or branding attribute. The partnerships with agencies such as Marriott were a practical and realistic method of introducing Starbucks into new environments where coffee consumption was typical. However, with high risks of cheapening the brand and allowing it to be leveraged and capitalized upon by knowledge leaders in the partner or joint ...Download file to see next pagesRead More
Share:
Tags
Cite this document
(“Brand Strategy Case Analysis Study Example | Topics and Well Written Essays - 750 words”, n.d.)
Retrieved from https://studentshare.org/geography/1415305-brand-strategy-case-analysis
(Brand Strategy Case Analysis Study Example | Topics and Well Written Essays - 750 Words)
https://studentshare.org/geography/1415305-brand-strategy-case-analysis.
“Brand Strategy Case Analysis Study Example | Topics and Well Written Essays - 750 Words”, n.d. https://studentshare.org/geography/1415305-brand-strategy-case-analysis.
Comments (0)
Click to create a comment or rate a document

In th...
8 Pages(2000 words)Case Study
sponsored ads
Save Your Time for More Important Things
Let us write or edit the case study on your topic "Brand Strategy Case Analysis" with a personal 20% discount.
GRAB THE BEST PAPER

Let us find you another Case Study on topic Brand Strategy Case Analysis for FREE!