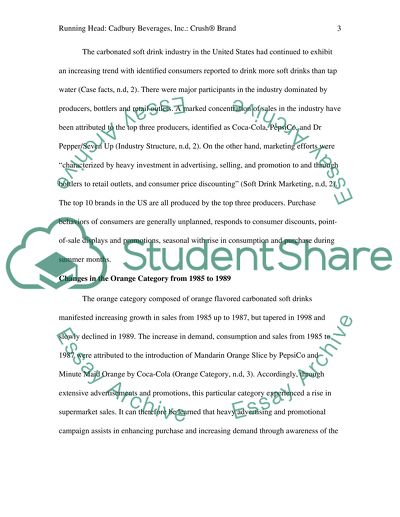 Download file to see previous pages Finally, an internet research is required to evaluate and compare Cadbury Beverages' present marketing strategy with the marketing strategy presented in the case. In one’s opinion, the most significant differences and changes in the present marketing strategy would be identified and determined as to how successful orange Crush® has been in the United States since 1992 with the basis for conclusion appropriately proffered. Characteristics of the US Soft Drink Industry The carbonated soft drink industry in the United States had continued to exhibit an increasing trend with identified consumers reported to drink more soft drinks than tap water (Case facts, n.d, 2). There were major participants in the industry dominated by producers, bottlers and retail outlets. A marked concentration of sales in the industry have been attributed to the top three producers, identified as Coca-Cola, PepsiCo, and Dr Pepper/Seven Up (Industry Structure, n.d, 2). On the other hand, marketing efforts were “characterized by heavy investment in advertising, selling, and promotion to and through bottlers to retail outlets, and consumer price discounting” (Soft Drink Marketing, n.d, 2). The top 10 brands in the US are all produced by the top three producers. Purchase behaviors of consumers are generally unplanned, responds to consumer discounts, point-of-sale displays and promotions, seasonal with rise in consumption and purchase during summer months. Changes in the Orange Category from 1985 to 1989 The orange category composed of orange flavored carbonated soft drinks manifested increasing growth in sales from 1985 up to 1987, but tapered in 1998 and slowly declined in 1989. The increase in demand, consumption and sales from 1985 to 1987 were attributed to the introduction of Mandarin Orange Slice by PepsiCo and Minute Maid Orange by Coca-Cola (Orange Category, n.d, 3). Accordingly, through extensive advertisements and promotions, this particular category experienced a rise in supermarket sales. It can therefore be learned that heavy advertising and promotional campaign assists in enhancing purchase and increasing demand through awareness of the brand category. Cadbury Beverages’ Competitive Position Cadbury beverages ranked fourth among the largest soft drink producers in the U.S. soft drink industry with an identified 3.4% market share. Remarkably, the organization manifests leadership in their specific product specialization, to wit: “Canada Dry is the top-selling ginger ale in the United States, Schweppes is the leading tonic water, and Canada Dry seltzers top the club soda/seltzer category. The combined sales of Sunkist and Crush brand orange drinks lead the orange-flavored carbonated soft drink category” (Softdrinks, n.d, 2). In the orange category, Cadbury beverages’ products belong to the top four with respective market shares indicated herein in 1989: Sunkist (14%), Mandarin Orange Slice (21%) and Minute Maid Orange(14%), and Crush (8%). This information indicates that Cadbury beverages are ...Download file to see next pagesRead More
Share:
Tags
Cite this document
(“Cadbury Beverages, Inc.: Crush Brand Case Study”, n.d.)
Retrieved from https://studentshare.org/geography/1411845-cadbury-beverages-inc-crush-brand
(Cadbury Beverages, Inc.: Crush Brand Case Study)
https://studentshare.org/geography/1411845-cadbury-beverages-inc-crush-brand.
“Cadbury Beverages, Inc.: Crush Brand Case Study”, n.d. https://studentshare.org/geography/1411845-cadbury-beverages-inc-crush-brand.
Comments (0)
Click to create a comment or rate a document

A strategic plan and a brand management strategy are therefore essential for the ideal solution. YNR (Young and Restless) is one such company that needs positive brand management and the following methods are proposed for their strategic initiative.

The company is targeting young well-heeled clients who are spread across Europe and America. Plans are being made for expansion into Asian countries like India and China but the company wants to establish itself as a competitive brand before it undertakes any expansion. As the name implies, the target market is the young and the Restless for which clothing becomes a part of their own identity as much as their music, culture, and lifestyle. Expansion into a foreign market is...
8 Pages(2000 words)Assignment

As the 2005 sales of instant coffee indicate, the sub-sector is further divided between regular, premium freeze-dried, decaffeinated, specialty, super-premium, powder, and economy or flavored coffee. Among these sub-categories, specialty coffee exhibited the highest growth rates overall. The dominance of instant coffee is attributed to a combination of aggressive marketing and branding campaigns by brand manufacturers, as well as the price consciousness and brand loyalty characteristic of coffee drinkers. However, instant coffee growth rates lag behind ground and roast, increasing only by 11.1% from 2003-2005, compared to 13.6% for the latter, which can be attributed to the development of new pod technologies and the decreasing pr...
8 Pages(2000 words)Term Paper

Sales promotion includes such activities as setting up store displays, holding Trade Shows, and distributing samples, premiums, and coupons. There are several factors that point to the need for promotion today. In the first place, as the distance between producers and consumers increases and the number of potential customers grows, the problem of market communication becomes significant.
There are Five different methods which are adopted for promotion, that are (1) Public Relations (2) Advertising (3) Publicity (4) Sales Promotion (5) Personal selling. The decision of the Promotional mix is related to budget availability for funds promotion, nature of the market and the product and the stage of the product life cycle.
Ad...
6 Pages(1500 words)Assignment

The consideration here was simply whether the accused design was too close to the registered design in accordance with the tests laid down in the law. It wasn’t a matter of whether or not Apple could have sued in England and Wales for copying utterly irrelevant to this case. In case, they could, they did not. Likewise, infringement of any patent for an invention is never an issue. Quite a lot of differences in the products existed. For instance, the iPad seemed thinner and has noticeably different curves on its sides.
Preliminary Injunctions for this case were applied by apple in respect of all three Samsung tablets in the Netherlands. It got a setback at first instance and on appeal. The Apple inc. had an outstanding p...
9 Pages(2250 words)Case Study
sponsored ads
Save Your Time for More Important Things
Let us write or edit the case study on your topic "Cadbury Beverages, Inc.: Crush Brand" with a personal 20% discount.
GRAB THE BEST PAPER

Let us find you another Case Study on topic Cadbury Beverages, Inc.: Crush Brand for FREE!