Comments (0)
Add to wishlistDelete from wishlist
Cite this document
Summary
Reebok: Segmentation and Positioning Name of the Student Subject Name of the Concerned Professor March 7, 2011 Reebok: Segmentation and Positioning 1: Reebok’s initiative to change its positioning strategy was motivated by its need for sustenance and the emerging market realities…
Download full paperFile format: .doc, available for editing
HIDE THIS PAPERGRAB THE BEST PAPER95.4% of users find it useful 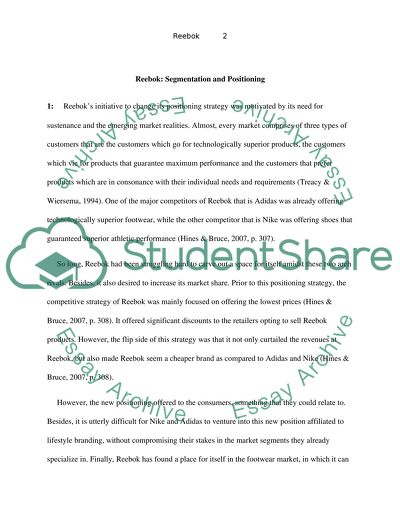 Download file to see previous pages One of the major competitors of Reebok that is Adidas was already offering technologically superior footwear, while the other competitor that is Nike was offering shoes that guaranteed superior athletic performance (Hines & Bruce, 2007, p. 307). So long, Reebok had been struggling hard to carve out a space for itself amidst these two arch rivals. Besides, it also desired to increase its market share. Prior to this positioning strategy, the competitive strategy of Reebok was mainly focused on offering the lowest prices (Hines & Bruce, 2007, p. 308). It offered significant discounts to the retailers opting to sell Reebok products. However, the flip side of this strategy was that it not only curtailed the revenues at Reebok, but also made Reebok seem a cheaper brand as compared to Adidas and Nike (Hines & Bruce, 2007, p. 308). However, the new positioning offered to the consumers, something that they could relate to. Besides, it is utterly difficult for Nike and Adidas to venture into this new position affiliated to lifestyle branding, without compromising their stakes in the market segments they already specialize in. Finally, Reebok has found a place for itself in the footwear market, in which it can dare to be the best. This strategy allows Reebok to consolidate its stakes in the lifestyle shoe discipline, while retaining adequate share in the athletic shoe segment (Kotler, 2003). It also allows Reebok the first entrant advantage, thus enabling it to keep on improving its superiority in the lifestyle shoe market, before Nike and Adidas chose to foray into this segment (Kotler, 2003). It also adds to the profitability of Reebok, thereby enabling it to further strengthen its position in the athletic and performance shoe segment (Kotler, 2003). 2: The success of Reebok was assured by its acumen in understanding well in time that the professional athletes comprised only a very small segment of the customers opting to buy sport shoes (Encyclopedia of Major Marketing Campaigns, 2007: Online). The major bulk of the sportswear customers comprised of the young men and women who preferred athletic shoes as street wear and demanded comfort and style from the sports shoes they purchased. These casual wearers comprised the largest customer segment in the sports shoes market, responsible for more than 80 percent of the sales (Encyclopedia of Major Marketing Campaigns, 2007: Online). While Nike and Adidas worked hard at being perceived by the propitious customers as being the sellers of cutting edge sports shoes, Reebok knew well that technological superiority was certainly not its forte. In the current scenario, Reebok is targeting young, sports minded males, who perceive their casual wear to be a projection of their young and sporty persona. This segment is not only the largest customer segment in the market under consideration, but also tends to be more loyal and relatively easier to approach through advertising campaigns and event sponsorship. Right now, Reebok is emphatically focusing on targeting and converting the young people having a taste for sports and desirous of reflecting their athletic temperament in their casual wear. Not to say, Reebok has accrued immense success in this endeavor. 3: Reebok’s strategy of creating new brands to target new markets and launching special collections under new brand names is a sound brand strategy considering the fact that Reebok primarily associates itself ...Download file to see next pagesRead More
Share:
Tags
Cite this document
(“Strategic Marketing Managment Case Study Example | Topics and Well Written Essays - 750 words - 2”, n.d.)
Retrieved from https://studentshare.org/geography/1410700-strategic-marketing-managment
(Strategic Marketing Managment Case Study Example | Topics and Well Written Essays - 750 Words - 2)
https://studentshare.org/geography/1410700-strategic-marketing-managment.
“Strategic Marketing Managment Case Study Example | Topics and Well Written Essays - 750 Words - 2”, n.d. https://studentshare.org/geography/1410700-strategic-marketing-managment.
Comments (0)
Click to create a comment or rate a document

Touch screen interface systems are becoming more and more common in the UK and abroad. During a pilot experiment using touch screen information technology, the automotive manufacturer Lexus piloted an informatio...
10 Pages(2500 words)Report
sponsored ads
Save Your Time for More Important Things
Let us write or edit the case study on your topic "Strategic Marketing Managment" with a personal 20% discount.
GRAB THE BEST PAPER

Let us find you another Case Study on topic Strategic Marketing Managment for FREE!