Comments (0)
Add to wishlist Delete from wishlist
Cite this document
Summary
Since Jamie Jansen was already issued a right-to-sue letter by the EEOC, she can proceed to file a case in court against the employer for statutory violation of the following: the Family and Medical Leave Act (FMLA) and sexual harassment under §703 of Title VII of the Civil Rights Act of 1964 (CRA). …
Download full paper File format: .doc, available for editing
HIDE THIS PAPERGRAB THE BEST PAPER91.2% of users find it useful 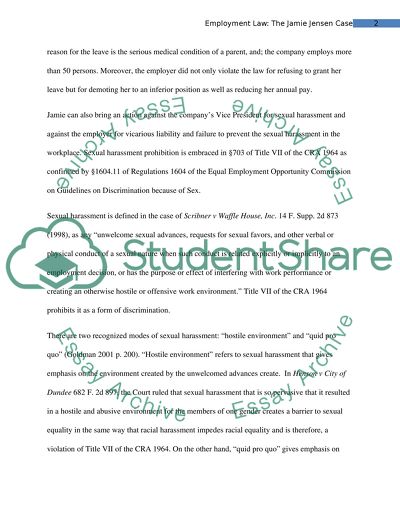 Download file to see previous pages She may also bring tort claims for actual, mental anguish, punitive and exemplary damages caused by the sexual harassment. Jamie may also sue for breach of contract for constructive discharge, if she decides not to return to work, by altering the terms and conditions of her employment or because of the extremely hostile environment in the workplace. Under the FMLA, which constitute Title 29, Chapter 28 of the United States Code, an employee is entitled to file a leave from work for a total of 12 workweeks in a 12-month period to care for, among others, a parent who is suffering from a serious condition (§ 2612 [a][1][c]). To avail of this right, an employee must have been employed by the employer for at least 12 months and for at least 1,250 hours of said period. The law assures the eligible employee under § 2614 that he/she shall be restored to the position he/she held before filing the leave when he/she returns to work and in addition, shall not suffer any diminution in salary or any other benefit by reason of such leave. Moreover, the employer must be employing at least 50 employees for the privilege to be applicable. Section 2615(a)(1) explicitly makes it unlawful for the employer to refuse the employee his/her rights under this law. It is evident that the refusal of Jamie’s employer to grant her a leave of absence is unlawful. The conditions required by the law to make Jamie eligible for leave have all been met: she has been employed for at least 12 months as proven by the yearly evaluation of her performance; the reason for the leave is the serious medical condition of a parent, and; the company employs more than 50 persons. Moreover, the employer did not only violate the law for refusing to grant her leave but for demoting her to an inferior position as well as reducing her annual pay. Jamie can also bring an action against the company’s Vice President for sexual harassment and against the employer for vicarious liability and failure to prevent the sexual harassment in the workplace. Sexual harassment prohibition is embraced in §703 of Title VII of the CRA 1964 as confirmed by §1604.11 of Regulations 1604 of the Equal Employment Opportunity Commission on Guidelines on Discrimination because of Sex. Sexual harassment is defined in the case of Scribner v Waffle House, Inc. 14 F. Supp. 2d 873 (1998), as any “unwelcome sexual advances, requests for sexual favors, and other verbal or physical conduct of a sexual nature when such conduct is related explicitly or implicitly to an employment decision, or has the purpose or effect of interfering with work performance or creating an otherwise hostile or offensive work environment.” Title VII of the CRA 1964 prohibits it as a form of discrimination. There are two recognized modes of sexual harassment: “hostile environment” and “quid pro quo” (Goldman 2001 p. 200). “Hostile environment” refers to sexual harassment that gives emphasis on the environment created by the unwelcomed advances create. In Henson v City of Dundee 682 F. 2d 897, the Court ruled that sexual harassment that is so pervasive that it resulted in a hostile and abusive environment for the members of one gender creates a barrier to sexual equality in the same way that racial harassment impedes racial equality and is therefore, a violation of Title VII of the CRA 1964. On the other hand, “quid pro quo” gives emphasis on hierarchy and affects employee’s compensation and other terms and benefits of employment as casualties of the sexual harassment. The case of Barnes v Costle 561 F 2d 983 mirrors a “quid pro quo” sexual harassment in that the director of the Agency that hired the complainant repeatedly solicited sexual favors ...Download file to see next pages Read More
Share:
Tags
Cite this document
(“Employment Law: The Jamie Jansen Case Study Example | Topics and Well Written Essays - 1500 words”, n.d.)
Retrieved from https://studentshare.org/geography/1410477-case-jami

CHECK THESE SAMPLES OF Employment Law: The Jamie Jansen

In th...
8 Pages (2000 words) Case Study
sponsored ads
Save Your Time for More Important Things
Let us write or edit the case study on your topic "Employment Law: The Jamie Jansen" with a personal 20% discount.
GRAB THE BEST PAPER

Let us find you another Case Study on topic Employment Law: The Jamie Jansen for FREE!