Comments (1)
Add to wishlistDelete from wishlist
Cite this document
Summary
The paper gives an idea about how the United States of America and Canada became preferred destinations for the Chinese and how they overcame every possible challenge in their pathway to settle in new lands with a possibility of a new future. …
Download full paperFile format: .doc, available for editing
HIDE THIS PAPERGRAB THE BEST PAPER95.9% of users find it useful 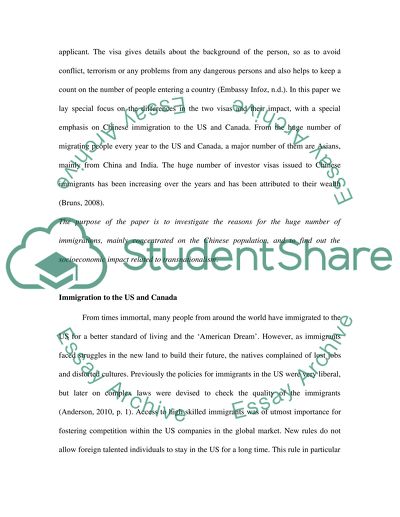 Download file to see previous pages The intention of this study is immigration as the act of people belonging to various countries passing or coming into another country to stay there permanently. All around the world, most immigrants have to obtain a visa for their movement from one place to another. All countries of the world have their own demarcated boundaries. No outside person can enter a country without a legal document certifying the entry, i.e. a visa against that countries immigration act. Thus a visa is a legal seal or a documented permission to enter a country. Mostly it is a stamp in the passport of the applicant. The visa gives details about the background of the person, so as to avoid conflict, terrorism or any problems from any dangerous persons and also helps to keep a count on the number of people entering a country. In this paper we lay special focus on the differences in the two visas and their impact, with a special emphasis on Chinese immigration to the US and Canada. From the huge number of migrating people every year to the US and Canada, a major number of them are Asians, mainly from China and India. The huge number of investor visas issued to Chinese immigrants has been increasing over the years and has been attributed to their wealth. From times immortal, many people from around the world have immigrated to the US for a better standard of living and the ‘American Dream’. However, as immigrants faced struggles in the new land to build their future, the natives complained of lost jobs and distorted cultures. Previously the policies for immigrants in the US were very liberal, but later on complex laws were devised to check the quality of the immigrants (Anderson, 2010, p. 1). Access to high skilled immigrants was of utmost importance for fostering competition within the US companies in the global market. New rules do not allow foreign talented individuals to stay in the US for a long time. This rule in particular encouraged companies to seek talent outside the country in the form of outsourcing. Many companies had also built setups in neighboring countries like Canada because of the high level of restrictions in the US (Anderson, 2010, p. 119). Investor visas were created to encourage foreign investors to put in money in a significant manner in the economy of the host country, in exchange for permanent residency, Green card in case of the US and Maple card in case of Canada, so that it may result in overall job creation in the host country. Both the USA and Canada have introduced investor or entrepreneur visas to encourage foreign entrepreneurs to settle in their countries and provide work to people there. ...Download file to see next pagesRead More
Share:
Tags
Cite this document
(“A comparison of the US investor visa and the Canadian investor visa Research Paper”, n.d.)
Retrieved de https://studentshare.org/geography/1392398-a-comparison-of-the-us-investor-visa-and-the-canadian-investor-visa
(A Comparison of the US Investor Visa and the Canadian Investor Visa Research Paper)
https://studentshare.org/geography/1392398-a-comparison-of-the-us-investor-visa-and-the-canadian-investor-visa.
“A Comparison of the US Investor Visa and the Canadian Investor Visa Research Paper”, n.d. https://studentshare.org/geography/1392398-a-comparison-of-the-us-investor-visa-and-the-canadian-investor-visa.
Comments (1)
Click to create a comment or rate a document

co
cordiasauer added comment 1 year ago
Student rated this paper as
The topic of "A comparison of the US investor visa and the Canadian investor visa" is quite popular among the tasks in college. Still, this example opens a brand new perspective of seeing the question. I’ll use the manner for my own essay.

Canadian Federalism and the Environment

Work on setting benchmark environmental standards and best practices got into full swing by the middle of the past decade. However, the international environment laws that in first place grew out of the scientific query and were articulated by environment groups were subject to skepticism amongst public policymakers. The situation became all the queerer in federal countries like Canada, where on one hand was the stick-wielding Federal government, obliged by its international commitment to enforcing environment policy strictly and the provincial governments, on the other hand, were, faced with a realistic picture of compulsions of socio-economic development, trying to find ways to protect local industry from debilitating effects of...
10 Pages(2500 words)Case Study

Austria or you may call is the Republic of Austria in official terminology is located in Central Europe. Although the population figures do not touch the danger limit but the talent and resources are worthwhile there. Germany and Hungry are also near this region. Italy is in the south of Austria. Switzerland will be seen in the west. So, now you can realize the importance of this region clearly.
The GDP is also impressive here. You can say the economy is strong and it has much depth. The strong social market economy is the result of development and proper management by the government (DArt & Turner 2008). Traders find flexibility in business operations. Labor has a positive approach to work and jobs.
There was a tren...
9 Pages(2250 words)Term Paper
sponsored ads
Save Your Time for More Important Things
Let us write or edit the research paper on your topic "A comparison of the US investor visa and the Canadian investor visa" with a personal 20% discount.
GRAB THE BEST PAPER