Comments (0)
Add to wishlist Delete from wishlist
Cite this document
Summary
The paper "Difficulties Faced by Central Banks in Operating Monetary Policy" states that apart from the various shortcomings of monetary policy, there are various other factors, which are also contributing to the difficulties faced by the central banks in operating monetary policy. …
Download full paper File format: .doc, available for editing
HIDE THIS PAPERGRAB THE BEST PAPER96.3% of users find it useful 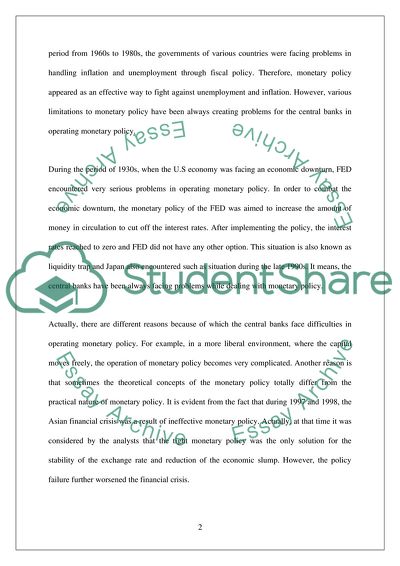 Download file to see previous pages There are two steps, which the central bank takes to operate monetary policy. In the first step, the policymakers decide the policy objectives that they want to attain and in the second step, the policymakers decide the process of manipulation of the tools of monetary policy. There are primarily three tools of monetary policy, which are used by the central bank including open market operations, discount policy and reserve requirements. The most commonly used tool of monetary policy is open market operation whereas; the discount loans only make up two to three percent of it. The reserves requirement ratio is not frequently used because it can destabilize the economy. Therefore, the central bank usually relies on open market operations.
In recent years, the importance of monetary policy has increased because of the diminishing role of fiscal policy in the stabilisation efforts made for economy. During the period from the 1960s to 1980s, the governments of various countries were facing problems in handling inflation and unemployment through fiscal policy. Therefore, the monetary policy appeared as an effective way to fight against unemployment and inflation. However, various limitations to monetary policy have been always creating problems for the central banks in operating monetary policy.
During the period of the 1930s, when the U.S economy was facing an economic downturn, FED encountered very serious problems in operating monetary policy. In order to combat the economic downturn, the monetary policy of the FED was aimed to increase the amount of money in circulation to cut off the interest rates. After implementing the policy, the interest rates reached to zero and FED did not have any other option. This situation is also known as a liquidity trap and Japan also encountered such as situation during the late 1990s. It means, the central banks have been always facing problems while dealing with monetary policy.
Actually, there are different reasons because of which the central banks face difficulties in operating monetary policy. For example, in a more liberal environment, where the capital moves freely, the operation of monetary policy becomes very complicated. ...Download file to see next pages Read More
Share:
Cite this document
(Difficulties Faced by Central Banks in Operating Monetary Policy Coursework, n.d.)
Difficulties Faced by Central Banks in Operating Monetary Policy Coursework. Retrieved from https://studentshare.org/finance-accounting/1731372-what-difficulties-may-central-banks-have-in-operating-monetary-policy

... Central banks are independent so that they operate under rules made to help them operate in a political free management (Kurgan and Wells 387). Therefore, this paper aims at obtaining a deep analysis on the role of central bank in use and implementation of monetary policy to stabilize the economy. This will be with respect to the great depression of 1929 to early 1940s. Monetary policy is the mean through which the monetary tools of a country control the flow of money. It mostly focuses on the rate of interest with an aim of promoting economic growth and stability. It is key role is to sustain, stable prices and maintain low levels of unemployment. Monetary policy can either be expansionary of contractionary. Expansionary policies increase...
7 Pages (1750 words) Research Paper

If compared to a case where objectives included both dimensions of public policy and commercial, such statement significantly increased the clearness of the direction given to bankers with central banks. There was an identity of logic of purpose. They were mandated with the role of discharging their functions in a way that is related to the interest of the public, considering state agencies’ functions and coordinating them. It is to the degree that the interest of the public could be provided by the addition of functions not assigned to the better (Callaghan, 2009). Hence, most central banks started to assume roles for financial sector’s development; payment system oversight and money operation, foreign exchange, capital market a...
13 Pages (3250 words) Research Paper

...﻿Central Banks and Monetary Policy Introduction Central bank can be identified as an institution whose main task is to manage the currency of a country, its money supply as well as its interest rates. The central bank of any particular country is also responsible to look after the commercial banking system. It is to be stated that the main function of the central bank is to administer the money supply or the monetary policy of the particular country by means of active duties such as handling interest rates and serving as lender of last resorts to the banking sector when they are facing financial crisis. There are four main objectives of the central bank such as stable inflation, high and stable real growth, stable interest rates and stable...
22 Pages (5500 words) Research Paper

...?Central Banks and Monetary Policy Affiliation with more information about affiliation, research grants, conflict of interest and how to contact Central Banks and Monetary Policy Central banks have a broad variety of responsibilities, from controlling monetary policy to applying definite goals such as financial stability, reduce inflation and income employment. Central banks are also normally concerned with currency, collection, as they are the bank of the government. They control the credit structure, supervise commercial banks, deal with exchange funds and operate as a lender of previous alternative. 1. Discuss briefly the five objectives of central banks. The main purpose of a central bank is, briefly, to supervise a nation's currency...
13 Pages (3250 words) Research Paper

...?Central Banks and other International Banks Describe when and why central banks buy either their own currency or the currency of another nation in an effort to control exchange rates. The central bank is vital to every modern economy in as far as monetary and fiscal policy is concerned. In the forex market, the bank may purchase foreign currency using domestic currency to keep inflation and deflation in check (Basu, 2009; Topnews, 2011). This helps in valuing or devaluing a particular currency in case of need. To increase the value of a currency, the central bank will buy the currency and hold huge quantities of it in its reserves thereby reducing its supply in the market. In some cases, the central government may place restrictions con...
3 Pages (750 words) Assignment

...Role of Central Banks In an economy with a central bank monopoly of currency issue, the central bank controls the monetary base through its ability to increase the quantity of currency in the economy. A principal objective of any central bank is to safeguard the value of the currency in terms of what it will purchase. Rising prices, or inflation, reduces the value of money. Monetary policy is directed to achieving this objective and providing a framework for non-inflationary economic growth. As in most other developed countries, monetary policy operates in the UK mainly through influencing the price of money, that is, the interest rate. In May 1997 the Government gave the Bank independence to set monetary policy by deciding the level...
11 Pages (2750 words) Essay

Monetary policy QN1. Four Chapters in “In Fed we Trust” Ten items I never new of before reading the book Key Playersof the worst financial Crisis
i. Three men were responsible in managing the Great Panic.
ii. The key individuals were the Treasury Secretaries, Mr. Hank Paulson, The Federal Chairman, Mr. Ben Bernanke, and Tim Geithner.
iii. Details of each key player’s characteristics, and there effects on incomes.
iv. Their personalities had a noticeable effect on the impacts their decisions had on the monetary system.
v. The negative effects of their moves on the psyche of the markets
vi. Geithner and Paulson were more prone to Gaffs than Bernanke in the public eye.
vii. The biggest issue on stage for the key...
2 Pages (500 words) Assignment

al bank delights in the monopoly of accumulating the financial base of a state and also it do prints the national currency which functions and acts as the state’s legal tender. This particular institution is considered to be independent from political intervention though restricted regulation by the executive and legislative bodies does exist. The central bank enjoys supervisory controls over other financial institutions. This helps in decreasing the risk that commercial banks and other financial institutions might indulge in fraudulent practices that may negatively affect a nation’s economy.
A depository institution is a financial institution like commercial bank, savings bank and credit union that is lawfully permitted to re...
6 Pages (1500 words) Essay
sponsored ads
Save Your Time for More Important Things
Let us write or edit the coursework on your topic "Difficulties Faced by Central Banks in Operating Monetary Policy" with a personal 20% discount.
GRAB THE BEST PAPER

Let us find you another Coursework on topic Difficulties Faced by Central Banks in Operating Monetary Policy for FREE!