Comments (0)
Add to wishlistDelete from wishlist
Cite this document
Summary
This paper "The Differences in Accounting Processes between Partnerships and Corporations" focuses on the fact that companies exist under different forms which include partnerships and corporations. A partnership exists when individuals or associates carry out a non-corporate business for profit. …
Download full paperFile format: .doc, available for editing
HIDE THIS PAPERGRAB THE BEST PAPER93.7% of users find it useful 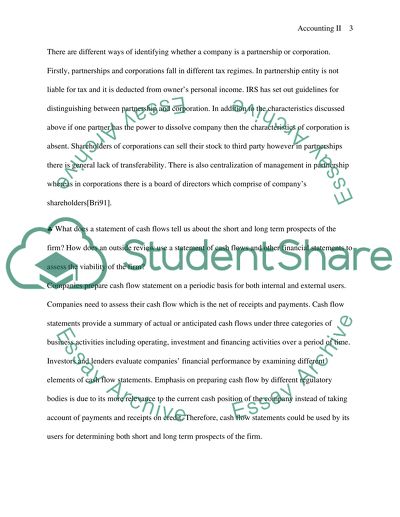 Download file to see previous pages Corporations typically have unlimited life and ease of ownership transferability in addition to owners limited liability. Examples of such companies are Microsoft and HP (Brigham & Ehrhardt, 2008).

The accounting treatment of partnership takes the company as an entity which is separate from partners’ personal affairs (Horngren, Bamber, & Harrison, 2005). The major difference in the accounting of corporations and partnership is the calculation and disclosure of the capital of the organization. Corporations are required to prepare and publish audited annual and quarterly reports which could be accessed by shareholders. These annual reports contain statements including income statement, balance sheet, cash flow and changes in shareholders’ equity. Financial reports are not published for external users by partnership and tax return is submitted as part of individual tax forms.

The classification needs to be made at the inception of the lease itself. Risk, with respect to leasing, refers to the possibility of loss arising on account of under-utilization or technological obsolescence of the asset. Reward means the incremental net cash flows that are generated from the usage of the asset over its economic life and the realization of the anticipated residual value on expiry of the economic life. A lease which cannot be classified as a finance lease is known as an operating lease. In the following situations a lease is classified as Finance lease:
The lower of the present value of minimum lease payments and the fair value of the asset is recognized as an asset and liability. The minimum lease payments a...
6 Pages(1500 words)Assignment

The attempts by foreign investments to penetrate China’s market have proven futile in the past especially due to the conservative nature of the inhabitants. China is a strict country when it comes to culture and cultural interaction. For ex...
7 Pages(1750 words)Coursework
sponsored ads
Save Your Time for More Important Things
Let us write or edit the case study on your topic "The Differences in Accounting Processes between Partnerships and Corporations" with a personal 20% discount.
GRAB THE BEST PAPER

Let us find you another Case Study on topic The Differences in Accounting Processes between Partnerships and Corporations for FREE!