Comments (0)
Add to wishlistDelete from wishlist
Cite this document
Summary
The paper “Types of Personal Investment in the United Kingdom and Popularity of Use” aims to focus on the practices of personal savings in the UK, different tools of investment available in the region and whether benefits related to it are a matter of scientific planning or just of good fortune…
Download full paperFile format: .doc, available for editing
HIDE THIS PAPERGRAB THE BEST PAPER96.7% of users find it useful 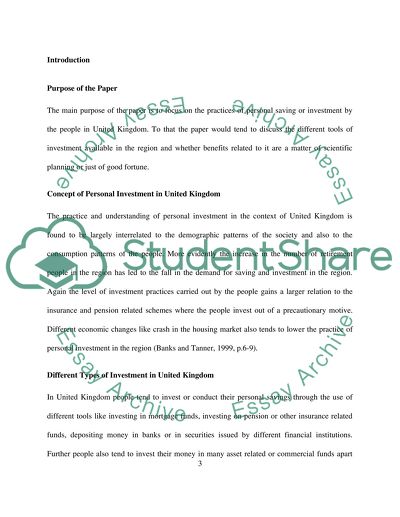 Download file to see previous pages The practice and understanding of personal investment in the context of the United Kingdom are found to be largely interrelated to the demographic patterns of the society and also to the consumption patterns of the people. More evidently the increase in the number of retired people in the region has led to the fall in the demand for saving and investment in the region. Again the level of investment practices carried out by the people gains a larger relation to the insurance and pension related schemes where the people invest out of a precautionary motive. Different economic changes like a crash in the housing market also tend to lower the practice of personal investment in the region.
In the United Kingdom, people tend to invest or conduct their personal savings through the use of different tools like investing in mortgage funds, investing on pension or other insurance-related funds, depositing money in banks or in securities issued by different financial institutions. Further people also tend to invest their money in many asset related or commercial funds apart from investing in agricultural and national savings deposits. The major part of the personal savings owes to funds related to pension and insurance other than a mortgage or housing properties (Banks and Blundell, 1994, p.67).
In the United Kingdom, the aspect of personal savings and investment gains attention in regards to categories like pension funds and other insurance related sectors. However other than the pension and insurance-related funds the personal investment activities of the people also center on deposits made in banks. Investment is again made by the people in funds created for the housing societies. Moreover other than the listed areas the people also tend to invest largely in sectors such as shares and dividend mainly equity-based issued by registered companies operating in the United Kingdom. In other types of personal investment practices, the people also tend to invest largely in different types of asset funds bearing interest gains and in other savings fund issued by the national government. The six different areas into which the people residing in the United Kingdom tend to invest their personal finances also contain security deposits and other unit trust schemes.
Out of the six listed avenues available to the people in the United Kingdom to conduct their personal savings, it is found that the sector of pension funds and insurance schemes gains the highest amount of attraction. The main reason inferred for the growing attention of the people to invest along the pension and insurance-related funds is to gain a large number of tax benefits. The people avail the exemption advantages from tax charges in regards to their investment in pension and insurance funds. Moreover, in regards to the insurance sector, the people also avail benefits linked to the market where the insurance schemes chosen for investing by the people stand to be market linked. ...Download file to see next pagesRead More
Share:
Tags
Cite this document
(Types of Personal Investment in the United Kingdom and Popularity of U Term Paper, n.d.)
Types of Personal Investment in the United Kingdom and Popularity of U Term Paper. Retrieved from https://studentshare.org/finance-accounting/1446442-personal-invesment-in-the-uk-is-it-science-or

“Types of Personal Investment in the United Kingdom and Popularity of U Term Paper”, n.d. https://studentshare.org/finance-accounting/1446442-personal-invesment-in-the-uk-is-it-science-or.
Comments (0)
Click to create a comment or rate a document

Despite the few negative incidences of crime committed by the United States of America’s security troops that were deployed in the country on a peacekeeping mission.
Since the war in Korea began in the early nineteen fifties, the United States has stationed tens of thousands of soldiers, mostly the United States’ army personnel, in South Korea. Through the assistance of the South Korean troops and other neighboring governments, the American troops have been able to guard and offer maximum security to South Korean people. In line with the argument of James (2003), ‘most of the military bases in South Korea are relatively isolated’ thus the need for much attention from the troops so as to ensure maximum...
10 Pages(2500 words)Assignment
sponsored ads
Save Your Time for More Important Things
Let us write or edit the term paper on your topic "Types of Personal Investment in the United Kingdom and Popularity of Use" with a personal 20% discount.
GRAB THE BEST PAPER

Let us find you another Term Paper on topic Types of Personal Investment in the United Kingdom and Popularity of Use for FREE!